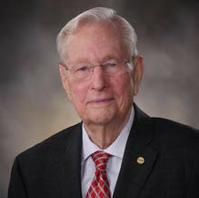 The first installment of Understanding Tomorrow’s Nuclear Energy — a lecture series sponsored by Purdue University and Duke Energy; will provide an overview of nuclear reactor technologies. Follow along from their first uses in submarines in the 1950s to the growth of nuclear power plants from 1980-2000 to how small modular reactors could be used in the near future to provide safe, renewable energy to power electrical grids, a university or even a remote village. Learn about the rigorous approval process for nuclear reactors, their safety systems and the evolution of reactor technology.

Dr. Arden Bement was the National Science Foundation Director from 2004 to 2010.

He has earned numerous awards; served in diverse government roles, including the director of the National Institute of Standards and Technology (NIST); served as a member of the NIST National Research Council, Space Station Utilization Advisory Subcommittee, and the Commercialization and Technology Advisory Committee for NASA. He has consulted for the Department of Energy’s Argonne National Laboratory and the Idaho National Engineering and Environmental Laboratory.