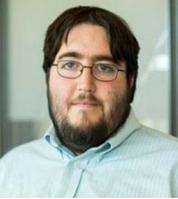 The VERA core simulator is being developed as a crucial factor for achieving the goals of the Consortium for the Advanced Simulation of Light Water Reactors (CASL). VERA accurately predicts the detailed power, temperature, and isotopic distribution in reactors throughout the reactor fuel’s lifetime. This information serves as the basis for understanding CASL’s challenge problems, including crud-induced power shift (CIPS) and crud-induced localized corrosion (CILC). An overview of the VERA simulation suite is presented herein, along with simulations of Watts Bar Nuclear Power Station operations, analysis of the methods’ accuracy, and demonstration VERA’s ability to predict CIPS.

Dr. Benjamin S. Collins is a senior staff scientist in the Reactor Physics group at Oak Ridge National Laboratory (ORNL).  He received his B.S and M.S. degrees in Nuclear Engineering from Purdue University in 2007 and 2008 respectively.  He received his Ph.D. from the University of Michigan in Nuclear Engineering, Radiological Science, and Scientific Computing in 2011.  After completing one year of postdoctoral study at the University of Michigan, he joined the faculty as a Research Scientist for two years before joining ORNL in 2014.  Since coming to ORNL, Ben received the CASL Knight Award for technical contributions to CASL, including his work on Crud Induced Power Shift simulations of the Watts Bar Nuclear Power Station and the American Nuclear Society Early Career Reactor Physicist award for his contributions to Crud Induced Power Shift and Molten Salt Reactor modeling and simulation efforts.  Ben also remains an Adjunct Assistant Professor at the University of Michigan where he continues to advise students’ doctoral research.

Ben has been involved in the Department of Energy (DOE) Energy Innovation Hub, the Consortium for Advanced Simulation of Light Water Reactors (CASL) since graduating in 2011. Ben has provided exceptional technical leadership in the development of CASL’s Virtual Environment for Reactor Applications (VERA), which won an R&D 100 Award in 2016. VERA provides coupled, high fidelity, multiphysics software capabilities needed to address commercial nuclear power plant operational and safety performance-defining phenomena at levels of detail previously unattainable, designed for implementation on both high-performance computers and industry-class computing clusters. Ben’s contributions to VERA include development of advanced whole-core pin-by-pin radiation transport modeling; multiphysics coupling of neutronics and thermal-hydraulics; and the development of a greatly-improved crud deposition capability. Ben has been instrumental in resolving various issues that have arisen during the application of VERA to the Watts Bar Nuclear Unit 1 Cycles 1-13, the Unit 2 startup and Cycle 1 analysis, and other full core problems such as the new Westinghouse AP1000® design. The crud research effort has repeatedly been cited by industry as the most important contribution that CASL has made to the improvement of nuclear plant operation.

In 2016, Ben competed for and won an ORNL Laboratory Directed Research and Development project on the development of methods for molten salt reactors (MSRs). Over the past year he has made significant progress and is working closely with several MSR startup companies to ensure that the methods and capabilities being developed meet their needs.

Ben has been a member of the American Nuclear Society since 2003 and is currently serving on the Reactor Physics Program Committee.  He has authored more than more than a dozen journal articles, as well as numerous conference papers and technical reports.  He has mentored numerous graduate students and postdocs and has served on the committee of 10 PhD students, including 5 which he served as co-chair.