Leading Initiatives and Current Priorities at the Office of Nuclear Energy 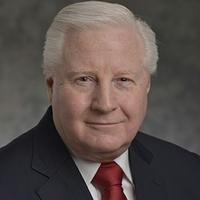 Overview: The Administration views nuclear energy as a key source of electricity generation—providing clean, baseload energy around the clock.

Dr. John W. Herczeg currently serves as the Deputy Assistant Secretary for Nuclear Technology Research and Development (NTRD) with the Department of Energy’s Office of Nuclear Energy (NE).  The innovative research and development (R&D) work supported and conducted by NTRD supports NE’s mission which promotes nuclear power as a resource capable of meeting the Nation's energy, environmental and national security needs. Dr. Herczeg manages an R&D budget of approximately $350 million and a federal staff workforce of about 30 employees. Prior to his current position, Dr. Herczeg served as the Associate Deputy Assistant Secretary for Fuel Cycle technologies from 2011 to 2013 and the Deputy Assistant Secretary for Fuel Cycle Technologies from 2013 until 2016.

Dr. Herczeg has made significant contributions to the development of innovative energy technologies throughout his professional career.  In 2016, Dr. Herczeg was awarded the Presidential Rank of Meritorious Executive to recognize his sustained record of exceptional professional, technical, and scientific achievement on a national and international level.

As a recognized expert in the nuclear energy field both in the United States and worldwide, Dr. Herczeg served as the United States representative to the International Atomic Energy Agency Standing Advisory Group on Nuclear Energy (SAGNE) from 2004-2010. Since 2007, he has been the Chair of the Nuclear Science Committee of the Organization of Economic Cooperation and Development Nuclear Energy Agency (OECD/NEA) where he has been instrumental in the reorganization of the Committee’s reactor physics and fuel cycle activities.

Before joining the Department of Energy, Dr. Herczeg worked at Brookhaven National Laboratory as a member of the scientific staff.  He also worked in private industry at the Nuclear Electric Utility Industry Office in Control Data Corporation.

Dr. Herczeg holds a Ph.D. and an M.S. in Nuclear Engineering from Purdue University.  He also holds a B.S. in Physics from Bowling Green State University in Ohio.