Exploring Mars with ChemCam on the Curiosity Rover 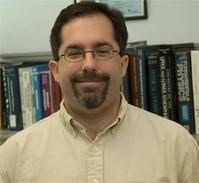 The ChemCam instrument on board NASA’s Curiosity rover includes an integrated remote Laser-Induced Breakdown Spectrometer (LIBS) and Remote Micro-Imager (RMI).  LIBS involves ablating material from the sample surface with a focusing a relatively high energy laser to generate an expanding plasma containing electronically excited atoms, ions, and small molecules.  These excited species emit light at diagnostic wavelengths as these excited species relax to lower electronic states from which the elemental composition is determined.  Half of the ChemCam instrument sits on the top of the mast where the laser, telescope and RMI reside.  The telescope focuses the laser as well as collect some of the LIBS emission up to 7 m away.  The collected LIBS emission is directed into an optical fiber that connects the mast unit with three spectrometers in the rover body and the LIBS spectra are recorded with three CCD detectors.  The RMI is also integrated into the telescope from which high resolution context images are recorded. In this presentation, I will describe LIBS, the ChemCam instrument and some of the result from Gale Crater on Mars.

Dr. Samuel M. Clegg earned a Ph.D. from Indiana University where he studied state-to-state inelastic scattering under the supervision of Prof. Charles S. Parmenter.  He served as a post-doctoral research associate in the Department of Geophysical Sciences at the University of Chicago and Sandia National Laboratories’ Combustion Research Facility.  He joined LANL’s Chemistry Division in 2003 as a Technical Staff Member and served as a Team Leader from 2004 to 2008.  He has developed a broad research portfolio involving Laser Induced Breakdown Spectroscopy (LIBS), Raman Spectroscopy, Raman-LIBS Spectroscopy (RLS), and Frequency Modulated Spectroscopy (FMS) funded by NASA, DOE/NETL, DOE/NA22, DOE/LDRD, DOD and DHS. He is the PI of the FMS program designed to measure the stable isotope ratio of atmospheric gases.  He is a co-investigator on the ChemCam instrument and a member of the Mars Science Laboratory “Curiosity” rover science team.  Finally, he was the RLS instrument PI on the Venus Surface and Atmospheric Geochemical Explorer (SAGE) proposed mission selected for a Phase A Concept Study.  He has over 40 peer-reviewed publications and 1 patent for the FMS detection of stable isotopes.