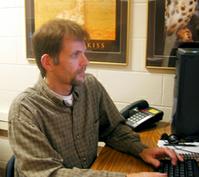 Curtis Smith has been a Purdue employee off and on since 1995. In 2003, Curtis left Indiana to take a job at The University of California Merced. Purdue's Professor Wright had accepted a position at the school in California and invited Curtis to join him. The buildings were still being constructed as Curtis created a computer environment for the university. Because the school was new, it offered little in terms of culture. After eight months, Curtis returned to his position as Senior Systems Analyst at ECN. Born in Monticello, Curtis is glad to be back in Indiana, and is enjoying the various conferences and art exhibits offered around Purdue's campus. Before joining Purdue's staff in 1995, Curtis had been employed at Micro Database Systems for ten years. Located in Lafayette, Micro Database Systems gained acclaim for having one of the best database systems, back in 1985 when four megahertz meant a fast computer and one megabyte meant a lot of storage space.

Curtis has a unique perspective on the university, because he has held many different positions within Purdue. When Curtis first joined Purdue's staff back in 1995, he was the site specialist for Grissom Hall. He then joined PACE, Purdue Academic Computing Environment, to help promote academic computing, before accepting his position at ECN. As a Senior Systems Analyst, Curtis deals with system software deployment, security, and debugging. Whereas many members of ECN staff focus on finding quick solutions for new problems, Curtis devotes his time to long term special projects. In the past, these projects have involved anti-virus, spam-filtering, and password-cracking software. He is currently updating the password-cracking software used to determine whether passwords used for ECN machines are secure. Curtis is in the process of converting ECN from Oracle 9i to Oracle 10g. He is also helping to create "Helpdesk Ticketing," a system that will replace ECN's current queue.

When it comes time for Curtis to go home at night, he rides his bike over the river to his home in Lafayette. An avid bike-rider, Curtis sold his Jeep and motorcycle before moving back to Indiana. He shares his new home with a man also named Curtis, a seventeen-year-old Chihuahua named Cody, and a black-and-white kitten named Basil, who he recently rescued from the streets. Like many computer professionals, Curtis spends his free-time playing computer games. He is a fan of first person shooters like Tron and Halo, though his current favorite is the Myst sequel, Uru. When Curtis needs a break from the computer, he turns to art. Curtis is content as either the creator or the audience, as he enjoys both drawing and perusing galleries of artwork. In addition to his time in California, Curtis has traveled all over the United States. He has also spent time traversing through most of Europe, as well as Israel and Egypt. Chile will hopefully be his next destination. Recently, Curtis purchased a shop in downtown Lafayette. He plans to turn the old beauty parlor into a spirituality-themed gift shop, specializing in candles and crystals. The store is expected to open in spring 2005, tentatively named "Sage Mage."

Server: zeoclient-03
Generation took 0.07 seconds
Copyright © 2020, Purdue University, all rights reserved.
An equal access/equal opportunity university.
If you have trouble accessing this page because of a disability, please contact the Webmaster at webmaster@ecn.purdue.edu.
Why secure web services?