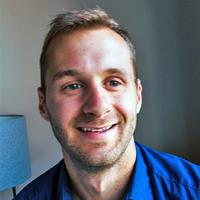 Interdiction of special nuclear material is a grand challenge of this century, and alternative technologies to He-3 have been targeted for interrogation for over a decade. Tensioned Metastable Fluid Detectors (TMFDs) - efficient, gamma-insensitive low-intensity fast neutron counters, developed here at Purdue - are one such alternative. This talk will describe in detail the physics of TMFDs and then describe successful detection of sub-kilogram quantities of uranium using threshold energy neutron analysis and interrogation of cargo for photofission - two active interrogation methods using TMFDs.

Alex Hagen is a Ph.D. candidate in Nuclear Engineering at Purdue. He has done research under Professor Rusi Taleyarkhan at the Metastable Fluids and Advanced Research Laboratory. He received his Bachelor’s of nuclear engineering from Purdue in 2012 and his Masters in 2014. His graduate research focuses on the Tensioned Metastable Fluids Detector and its applications to counter nuclear terrorism and homeland security. He has presented and published his work across the country, notably at the Symposium on Radiation Measurement and Applications in 2016 and at the Nuclear Science Symposium in 2017. He plans to defend his Ph.D. in March 2018.