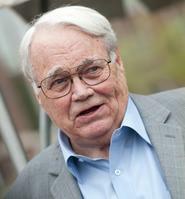 Purdue Environmental and Ecological Engineering (EEE) is deeply saddened by the passing of Fred M. Fehsenfeld, the founder of the EEE Fehsenfeld Family Headship.

Fehsenfeld enrolled in Purdue at the age of 17, but took a step away from college the next year to serve during World War II in the U.S. Army Air Corps. He was assigned to the 354th Pioneer Mustang Fighter Group in France, a fighter group of P47 Thunderbolts and P51 Mustangs. He flew 89 missions in Europe in over a little more than a year, and was awarded the Air Medal with three silver clusters and the Silver Star. He later served in the Indiana Air National Guard. Following the war, Fehsenfeld returned to Purdue, receiving a bachelor’s degree in mechanical engineering in 1948. He received a Purdue honorary doctorate of engineering in 1999.

With his entrepreneurial spirit, Fehsenfeld led the transformation of the family business, Crystal Flash Petroleum, from 100 employees, operating gas stations and home heating oil sales in Indiana and Michigan into what evolved as The Heritage Group. The Heritage Group currently employs 6500 people around the world, with operations across North America, Europe and China, in the core industries of Environmental and Remediation, Specialty Chemicals and Fuel Products, and Construction and Materials. Fehsenfeld was a loyal supporter of Purdue University through numerous contributions over the years, including the establishment of the Fehsenfeld Family Head of EEE.

“The generosity of Fred and Barbara Fehsenfeld and the rest of the Fehsenfeld family have made a world of difference to EEE by providing assistance to students, faculty and program development,” says John W. Sutherland, the Fehsenfeld Family Head of EEE. “I loved spending time with Fred. He was passionate about seeking creative ideas that could be economically successful and preserve the environment for future generations.”