The foundation of the Environmental and Ecological Engineering program was built through an NSF Curricular Planning grant in 2002.  The Purdue College of Engineering built on the work from this grant in 2004 with the creation of the “Environment in Engineering Committee,” an ad hoc committee charged with developing strategies to enhance research and educational programs related to the environment within the College of Engineering. The committee’s final report in 2005 recommended the creation of a new academic unit that could serve as a focal point within the college for environmental research and learning.

In the College of Engineering, a Division is defined as “an independent unit with a defined mission or purpose.” It is important to note that EEE is a Division of the College of Engineering as a whole; it is not a sub-unit of any Department or School within the College. The College’s Definition of Divisions specifically states that Divisions “must represent the collaborative efforts of multiple schools/departments, and operate for the collective benefit of the contributing Schools and the College.” Divisions have all of the academic and administrative rights and responsibilities of a Department or School (except tenure-granting ability).

In 2007, the Division launched an undergraduate minor in EEE, and collaborated with the ABET-accredited Multidisciplinary Engineering (MDE) program in the Purdue School of Engineering Education on the establishment of an EEE Plan of Study within MDE.  These early students were officially MDE students and met the MDE course requirements (which are slightly different from the current BSEEE requirements). However, they were taught, advised, and mentored by both EEE and MDE faculty and staff. The first three students entered the MDE EEE plan of study in Fall 2008, and the first two graduated in December 2010. The program grew significantly to almost 50 students by Fall 2012.

The B.S. degree in EEE at Purdue University-West Lafayette received formal final approval from the Indiana Commission for Higher Education on September 14, 2012. This marked the end of an almost decade-long process of program planning and launch. Shortly after the BSEEE program received final approval, students transitioned out of MDE and officially into the EEE program. This included the group of ten students in the first BSEEE graduating class in May 2013.

As shown on the figure below, enrollment in the EEE program continues to steadily increase.  As of Fall 2014, there are 84 students enrolled in the BSEEE plan of study and 51% of which are female. 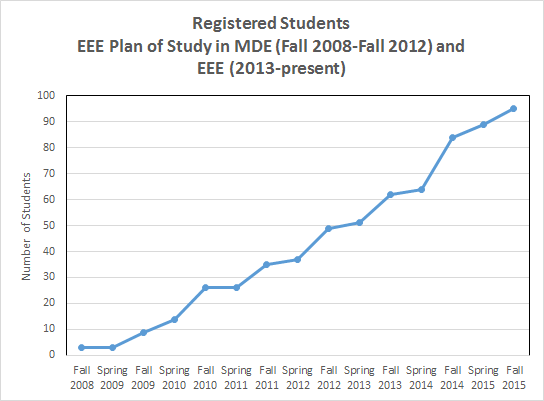