Julio Hernández has harnessed his family's work ethic and sense of community into a career in aerospace — and dedication to mentoring younger students.

Julio Hernández has always lived between cultures. Growing up in California, he remembers family life centering around migratory farm work. He often listened to stories from his grandparents about their migrant life where they traveled up the Pacific coast to northern California in summer, and down to Mexico in winter, following harvest season. Following the work.

Eventually, his grandparents settled in Lodi, California allowing his parents to break that cycle. His dad, José Hernández, didn’t obtain a stable education until second grade — but, inspired by radio broadcasts of the last Apollo mission, would go on to study engineering and become one of NASA’s first Mexican American astronauts.

It was through generational dedication that Julio, now a doctoral student in Aeronautics and Astronautics, and his siblings were given an additional advantage.

Julio Hernández and his astronaut father José standing next to the Neil Armstrong statue at Purdue.

“I feel privileged to not have to work in the fields. I recognize that many people still do, now, my dad endeavors to be an inspiration and role model for the Hispanic community. He’s proving the American dream,” Julio says.

But Julio still had to work. He has a strong sense of family, and of the need to sacrifice for that family.

“When my dad was training for his mission, my mom also opened up a restaurant. I worked there through my entire middle school and high school life. I didn't have as much of a childhood in the traditional American sense,” he says.

“It was reminiscent of the traditional Mexican American childhood of contributing to the family. I was taking care of my four younger siblings and working in the restaurant on nights and weekends.”

Now, with two master’s degrees in engineering — one of those in Aeronautics and Astronautics at Purdue — he carries some of that familial dedication forward to his fellow Latino students and Beta Theta Pi members. When he’s not doing his doctoral research, he gives his collegiate free time to modeling what it means to be a good man, and a good person.

While working on his doctorate at Purdue, Julio had the opportunity to participate in one of NASA's Mars analog missions

A bridge between two cultures

Julio frequently thinks about his identity and his journey: How he’s not seen as completely American in the U.S. or as completely Mexican in Mexico – and how that is both an immigrant feeling and an American one.

José Hernández placing a graduation gown on his son, Julio, upon Julio's graduation from University of the Pacific.

“You're on a bridge between the two cultures,” he says. “This experience itself is American, because of America’s immigrant roots. I'm always careful about not misrepresenting my heritage, because of the privilege that I enjoy being a citizen and benefiting from the success of my parents. Many millions of others are still grinding towards their own dream.”

After high school, Julio had set out to be an engineer. Seeing his dad repeatedly apply for astronaut training for three years before being accepted in 2004 was an inspiration.

“I have the work ethic of putting in your all, and working through what you set your mind to. That has been very much instilled into me.” Julio says.

Having completed a master’s in engineering sciences at his dad’s alma mater, University of the Pacific, he knew he wanted to work in aerospace. So he looked for opportunities to expand his education — and found a way to return the favor as well.

“Purdue was my number-one choice, but it was also the only school that would give me an opportunity [in aerospace engineering],” he says. “As a result, I want to give back to the community that gave me that opportunity. They took a risk on me and I'm not going to disappoint.” 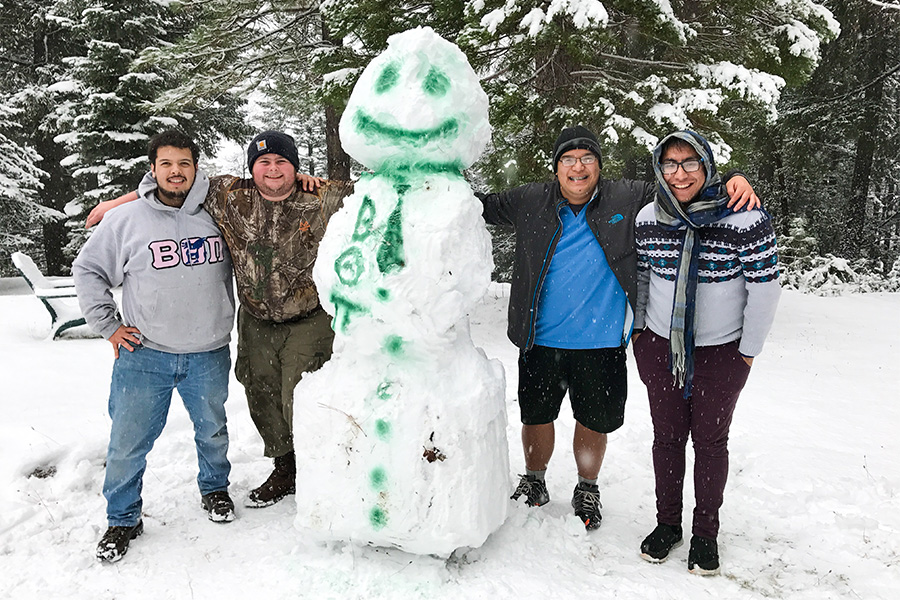 That’s part of why when he first started at Purdue he became an adviser at the Beta Theta Pi fraternity. Later he also became a live-in adviser, a “house-dad,” to more directly leverage his background and experiences to help guide others through freedom, youth, and masculinity.

“Mentorship is one of my highest passions. I want to show young adult men how they can build their own community and contribute to that community in a very positive way,” he says. “And additionally, helping them be comfortable expressing their own view of masculinity. I believe being able to communicate your emotions and process them is part of what it means to be a man in the 21st century.”

Julio Hernández representing part of what masculinity means to him.

As house dad, he shows new members and new college students not only how to navigate their new-found freedom, but how they can be role models themselves.

“I believe in empowering them with the right mentality to head down a direction in life that is sustainable and healthy. Not just in self-enrichment, but in a way that is communal,” he says. “Their successes also become the community's successes.”

And although these mentorship goals are grounded in humanity, Julio does also have his eyes set on space. He hopes his doctoral work — in multifunctional composite materials with self-sensing properties, which he’s conducting under the tutelage of Assistant Professor Tyler Tallman — will lead to a fruitful research career in academia or in a national lab setting, like the Advanced Materials and Processing Branch at NASA Langley.

“I want contribute to human space exploration in whatever way I can,” he says.