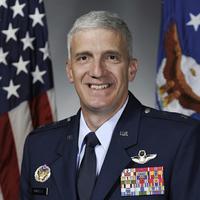 The School of Aeronautics and Astronautics was honored to have had Major General Thomas J. Tom Masiello give the 2014 Charles Rolls and Henry Royce Memorial Lecture on October 8, 2014. His talk was entitled, National Defense Strategy: The Role of Science and Technology.

Maj. Gen. Masiello is the Commander, Air Force Research Laboratory, Wright-Patterson Air Force Base, Ohio. He is responsible for managing a $4 billion science and technology program that includes both Air Force and customer funded research and development. He is also responsible for a global workforce of approximately 10,000 people in the laboratories component technology directorates, 711th Human Performance Wing and the Air Force Office of Scientific Research.

General Masiello was commissioned in 1981 as a distinguished graduate of the U.S. Air Force Academy. A command pilot, he has logged more than 3,300 flying hours in more than 20 different aircraft. He has served as an experimental test pilot and test squadron commander conducting developmental flight tests on a wide variety of weapon systems. He has been Director of the Munitions Directorate at the Air Force Research Laboratory, Wing Commander of a classified unit, the Command Inspector General for Air Force Materiel Command and most recently Director of Special Programs within the Office of the Under Secretary of Defense for Acquisition, Technology and Logistics.

The general has held other operational and staff assignments, including a tour as Deputy Chief of Staff, U.S. Central Command, where he spent the bulk of his tour at CENTCOM's Forward Headquarters in Southwest Asia; and Deputy Director for Operations - Operations Team Two, National Military Command Center, Joint Staff, the Pentagon, Washington, D.C. He has served as Deputy Director, Strategic Effects, U.S. Forces-Iraq, Baghdad, Iraq, and Deputy Assistant Secretary for Plans, Programs and Operations, Bureau of Political-Military Affairs, U.S. Department of State.

Begun in 2002, The Charles Rolls and Henry Royce Purdue Memorial Lecture Series is presented by Rolls-Royce and Purdue's School of Aeronautics and Astronautics. This Series brings to campus speakers from the aviation and aerospace industries to inspire students who are considering careers in these fields.