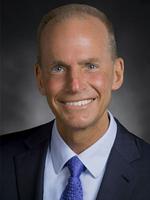 Over the course of decades, Boeing has celebrated lunar footsteps, space shuttle launches and the assembly of the International Space Station, among other milestones. Fifty years after humans first walked on the moon, the aerospace leader now is focused on what comes next. Boeing Chairman, President and CEO Dennis Muilenburg will discuss the future of space exploration, from traversing deep space, returning to the moon permanently, and taking our first steps on Mars to expanding from commercial air to a vibrant commercial space travel ecosystem.

The William E. Boeing Distinguished Lecture Series, named in honor of The Boeing Company's founder, is administered by the College of Engineering's School of Aeronautics and Astronautics. Started in 1999, the series features an internationally known speaker from the aerospace or air transportation industries.

Muilenburg's talk will be at 5:30 p.m. in Purdue Memorial Union's North Ballroom. It is free and open to the public.

Dennis Muilenburg is chairman of the board, president and chief executive officer of The Boeing Company. Muilenburg, 55, oversees the strategic direction of the Chicago-based, $101.1 billion aerospace company. With roughly 150,000 employees across the United States and in more than 65 countries, Boeing is the world's largest aerospace company and top U.S. exporter. It is the leading manufacturer of commercial airplanes, military aircraft, and space and security systems, and a provider of global services; it supports airlines and U.S. and allied government customers in more than 150 nations.

Muilenburg became chairman of the board in March 2016, chief executive officer in July 2015 and president in December 2013.

Until July 2015, Muilenburg served as vice chairman, president and chief operating officer of Boeing, where he supported the company’s aerospace business operations and focused on specific growth enablers, including important global relationships, leadership initiatives and development program performance. Before that, Muilenburg served as president and chief executive officer of Boeing Defense, Space & Security (BDS). Earlier, Muilenburg was president of BDS’s Global Services & Support business, vice president and general manager of the Boeing Combat Systems division, and program manager for Future Combat Systems. Prior to that, he served as vice president of Programs & Engineering for Boeing Air Traffic Management and director of Weapon Systems for the proposed Boeing Joint Strike Fighter aircraft. He also held management and engineering positions on F-22, Airborne Laser, High Speed Civil Transport and the Condor reconnaissance aircraft, among others.

Muilenburg, who joined Boeing in 1985, spent the first 15 years of his career in the Puget Sound region of Washington, where he held a number of program management and engineering positions in support of both the commercial airplanes and defense businesses.

Muilenburg is a member of the board of directors of Caterpillar Inc., the U.S.-China Business Council, the Congressional Medal of Honor Foundation, Northwestern University and FIRST (For Inspiration and Recognition of Science & Technology). He is past chairman of the Aerospace Industries Association (AIA) board of governors and a current AIA executive committee member. He is a board of directors member of Business Roundtable, an association of chief executive officers of leading U.S. companies. Appointed by the administrator of the National Aeronautics and Space Administration, he serves on the National Space Council's Users Advisory Group. He also serves on the board of trustees for the National World War II Museum.

He is an honorary fellow of the American Institute of Aeronautics and Astronautics (AIAA) and the Royal Aeronautical Society, and a member of the National Academy of Engineering (NAE).