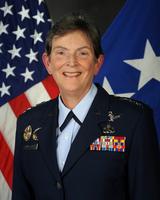 "The Third Offset Strategy: The Future of Airpower"

Gen. Pawlikowski's talk on the future of airpower will be at 4:30 p.m. in Stewart Center's Fowler Hall. It is free and open to the public.

The William E. Boeing Distinguished Lecture Series, named in honor of the Boeing Co.'s founder, is administered by the College of Engineering's School of Aeronautics and Astronautics. Started in 1999, the series features an internationally known speaker from the aerospace or air transportation industries.

General Pawlikowski entered the Air Force in 1978 through the ROTC program at the New Jersey Institute of Technology. She then attended the University of California at Berkeley and received a Doctorate in chemical engineering in December 1981, entering active duty at McClellan AFB, California, in April 1982.

General Pawlikowski is nationally recognized for her leadership in the US science and technology community. She is a Fellow of the American Institute of Aeronautics and Astronautics and a member of the National Academy of Engineers.

Prior to her current assignment, General Pawlikowski was the Military Deputy, Office of the Assistant Secretary of the Air Force for Acquisition, the Pentagon, Washington, D.C

A reception will be held in the West Foyer lobby of the Stewart Center immediately following the lecture.