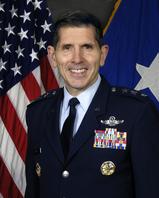 Lt. Gen. Moore's talk on preserving aerospace combat advantages in a fiscally constrained environment will be at 4 p.m. in Stewart Center's Fowler Hall. It is free and open to the public.

The William E. Boeing Distinguished Lecture Series, named in honor of the Boeing Co.'s founder, is administered by the College of Engineering's School of Aeronautics and Astronautics. Started in 1999, the series features an internationally known speaker from the aerospace or air transportation industries.

Lt. Gen. Moore graduated from the U.S. Air Force Academy and, as a Guggenheim Fellow, earned a master's degree in aeronautical engineering at Columbia University before entering flight school in 1981. He served as a T-38 instructor pilot, an operational F-15 pilot and as an experimental test pilot. He also served as commander of the first F-22 squadron as well as a group commander at Eglin AFB, materiel wing director of the F-16 System Program Office, materiel wing commander of the F-22 System Program Office, and vice commander of the Aeronautical Systems Center.

Lt. Gen. Moore served as chief of air operations, Multi-National Forces-Iraq in 2004, and he is a command pilot with more than 3,000 flight hours in 30 types of aircraft.

Before assuming his current position, he was vice commander, Air Force Materiel Command.

A reception will be held in the West Foyer lobby of the Stewart Center immediately following the lecture.