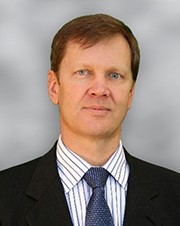 Dr. Terry L. Grimm received his Bachelor of Science degree with highest honors in Nuclear Engineering from Purdue University in 1987. He then attended the Massachusetts Institute of Technology, where he received his Ph.D. in Nuclear Engineering and Plasma Physics. While working on his doctorate, he was a research assistant in the Coherent Electromagnetic Wave Generation Division of the Plasma Fusion Center of the Massachusetts Institute of Technology (MIT), studying high-power, high-frequency microwave devices (gyrotron) for electron cyclotron resonance heating of fusion plasmas.
Dr. Grimm was a senior physicist and adjunct professor at the Michigan State University (MSU) National Superconducting Cyclotron Laboratory (NSCL). In early 2000, he established the Superconducting Radio Frequency group at NSCL and supervised construction of infrastructure to develop, fabricate, and test numerous superconducting cavities. Dr. Grimm’s research on superconducting particle accelerators for the Rare Isotope Accelerator (RIA) involved the supervision and guidance of 10 staff members and six Ph.D. students. His work on RIA laid the foundation for the $500 million Facility for Rare Isotope Beams project that was recently cited at MSU. Prior to his research with MSU, Dr. Grimm was a physicist at the Department of Energy’s Superconducting Super Collider Laboratory in Dallas, where he led a team that designed and tested the low-energy booster cavity and studied longitudinal beam dynamics.
In 2005, Dr. Grimm founded Niowave to commercialize superconducting electron linear accelerators in fields as diverse as healthcare and national security. It has grown to be a world industrial leader in superconducting accelerator research. In 2008, the firm qualified as the second U.S. vendor for accelerating cavities for the International Linear Collider. In 2009, Niowave became the first private company in the world to design, fabricate, and test a superconducting electron injector. Niowave has grown to over 60 employees and has received numerous awards, including being named among Michigan’s 50 Companies to Watch in 2008. In 2010, he received the IEEE Entrepreneurship Award in Applied Superconductivity.