Graduated from Purdue: 1957 BSME; University of Akron 1970, MBA (Aspiring Nuclear Engineer before the degree was available at Purdue)

I came to Purdue in 1953 after graduating from Tokyo American High School - Narimasu in Tokyo, Japan. My father was stationed there in the Headquarters of the U.S. Far East Air Forces during the Korean War, which thankfully, was coming to a close. I came to Purdue with the plan of becoming a mechanical engineer like my father and my great uncle, who had graduated from Purdue in 1911 in the great days of the railroads. He was a true BoilerMaker.

On December 6, 1953, President Dwight D. Eisenhower delivered his landmark speech “Atoms for Peace” to the UN General Assembly and I took that speech to heart. As I progressed through my studies I worked toward my goal of becoming an engineer to help implement his goal. I took nuclear engineering courses as they were available and could be fitted into my curriculum in Mechanical Engineering, since the Nuclear Engineering Degree was not yet defined. As part of his program, President Eisenhower proposed building a nuclear-powered merchant ship to travel around the world as a showcase for the peaceful use of nuclear energy, along with a number of demonstration nuclear power plants built by various utilities.

As I continued my studies, I obtained employment as a student engineer at the St. Clair Power Plant of Detroit Edison during two of my undergraduate summers to learn more about power plants. Upon graduation from Purdue in 1957, I joined Babcock & Wilcox, the company that had designed and built the first reactor for Indian Point Power Station, one of the early reactors built as a demonstration plant under the president’s program. B&W was designing and building the reactor system for the Nuclear Ship Savannah (pictured left). But as an Air Force ROTC graduate, I was obligated to serve 3 years of active duty in the USAF, which I did on assignment at Ramstein Air Base in Germany. When I returned to the U.S. in 1960, I then had to complete B&W’s extensive Student Engineering Training Program. An early assignment following that was to the Nuclear and Special Products Department where heavy pressure vessels were designed for commercial and military application, including the high pressure gas storage vessels for the NASA rocket programs, which was one of my projects.

As my career progressed, I was assigned to do preliminary design on conventional fossil fueled steam generators. But in 1963 a call came for me to interview for a position with the Savannah Technical Staff, the land-based engineering group located in Galveston, Texas, for the support of operations of the Nuclear Ship Savannah. Soon I was working on various engineering projects and studies for the ship. Then I was designated as the editor of the Port Operating Plans for the ship. Much like airline operations, the Savannah’s operator had to file operating plans for the 33 U.S ports and 16 foreign ports she was to visit during her demonstration cruises. The plans included analysis of berthing locations, population densities around the ship’s berth, exclusion zones, power history prior to berthing, residual power levels, etc. This was similar to the siting a regular nuclear plant, except with considerations specific to a movable reactor which could be moved out to sea if necessary, and thus could be located for a short period of time near a population center. For example, the Savannah was berthed in the Port Of New York on six different occasions including berths on the west side of Manhattan in the Hudson River. But the power level of her 74 MW reactor was a teakettle compared to the U.S. Navy’s modern submarines and aircraft carriers and modern utility nuclear power plants. Even so, she had a very respectable top speed of 24 knots, comparable to most but the fastest large modern container ships. She usually entered ports only under diesel power and with tugboats, lowering residual heat and fission product inventory and minimizing nuclear operational concerns.

When she finished her demonstration cruises by 1965 she had been visited by more than 1.4 million people. She then sailed for three more years in commercial service visiting 45 foreign ports total. She never had to be refueled. Only four elements were replaced and the core was shuffled to optimize burnup. Her fuel was removed and the power plant deactivated in 1971 and she was put into storage.

As her original demonstration cruises were ending, I was reassigned back to fossil fueled boilers. With time I managed to return to the nuclear industry by joining the Marketing Department with B&W offering nuclear power systems to the electric utility industry, both domestic in the U.S., and the growing market overseas. During that period I completed an MBA at the University of Akron.

Later I worked in various positions including Project Management of B&W’s Standard Plant, and then with the units destined for TVA’s Bellefonte Nuclear Plant. After the accident occurred at Three Mile Island, the entire nuclear industry began to slow down. My final assignment with B&W was as an educator and public speaker trying to inform and teach the public about the safety and benefits of nuclear energy as B&W was attempting to establish a Nuclear Waste Reduction Center outside of Pittsburgh, Pennsylvania.

Then I retired from B&W in 1984 and went to work as a manager on the engineering team working to inspect and prove that Comanche Peak Nuclear Power Plant in Texas had indeed been properly and safely designed and built. Suffice it to say, that plant started up successfully in April 1990 and has been operating well and efficiently ever since providing electric power for Texas and the Southwestern Grid.

During my career, I was an active member of the American Nuclear Society, Chairman of the Virginia Section of ANS, and Chairman of the ANS Power Division’s 1984 Topical Meeting in Williamsburg, Virginia.

I retired again in 1987 and went into other work to design computer-based power plant control room simulators to train power plant operators and to research ways to improve plant operations to reduce air pollution.

Later, I worked in Macintosh computer sales, installation, training and networking for colleges, schools, small businesses and individuals. As of 2005 I am now really retired and am now enjoying family and friends. At age 80, I must say I have had a good life. And I’m proud to say that my son Tim is a Purdue Alum in Computer and Electrical Engineering. with BS and Master’s from Purdue and a PhD from U. Kentucky.

Finally, I can report that while the Savannah is retired too, she has been designated as a National Mechanical Engineering Landmark, a National Nuclear Engineering Landmark, and a National Historic Landmark by the National Park Service. She is berthed in Baltimore Harbor and may be toured by appointment. A full description of the N.S. Savannah and the project may be found online in Wikipedia. Her NRC license is set for her to be fully decommissioned in 2031. 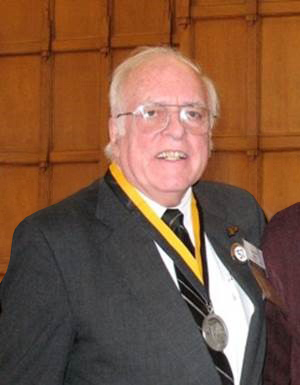 Left: Gordon Mattox and his wife, Dottie (not pictured) were awarded their "Purdue Forever" 50-Year Medals by President Jischke in 2007.