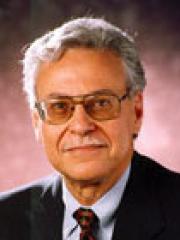 Professor Said Abdel-Khalik received his Ph.D. from the University of Wisconsin-Madison in 1973. After two years as a Postdoctoral Fellow and one year in industry, he returned to Wisconsin as a faculty member in 1976 rising to the rank of full professor in 1982.
He joined the Georgia Tech faculty in 1987, where he now holds the Southern Nuclear Distinguished Professorship in Nuclear and Radiological Engineering.
Dr. Abdel-Khalik’s work over the past 40 years has focused on reactor engineering and thermal-hydraulics; reactor safety; multi-phase flow; and cooling of ultra-high power density systems.
He has supervised nearly 120 graduate theses in both Nuclear and Mechanical Engineering and has published a textbook on accident and transient analysis for PWRs, several patents, and over 350 papers and publications in leading journals and conference proceedings.
He is a Fellow of both the American Nuclear Society and the American Society of Mechanical Engineers and is the recipient of numerous awards including the Glenn Murphy Award of the American Society for Engineering Education, the Outstanding Achievement Award of the American Nuclear Society Fusion Energy Division, Georgia Tech’s Outstanding Doctoral Thesis Advisor Award, and the Woodruff School’s Outstanding Educator Award.
Dr. Abdel-Khalik served as a member of the Advisory Committee on Reactor Safeguards (ACRS) of the US Nuclear Regulatory Commission for six years (2006 to 2012), including two years as Chairman (2010-2011). He has also served on the Nuclear Safety Review Boards for several US Nuclear Power Plants, including Farley, Hatch, and Vogtle. He currently serves as Chair of the Advisory Council of the Institute of Nuclear Power Operations (INPO) in Atlanta, and the Board of Trustees for Badr University in Cairo, Egypt.