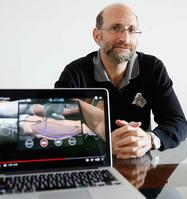 Juan Wachs (Photo by Sebastián Campanario, La Nacion)
Purdue IE's Juan Pablo Wachs is leaving his footprints in the AI industry by bridging the gap between humanity and technology with his research in supervised autonomy.

"We try to come up with new ways and new approaches to make the work of humans and robots easier, especially in domains of hospitals, surgeries, and all these types of complex interactions," said Wachs in a new video produced by the Purdue Graduate School.