IE senior "rides his own wave" to impact campus 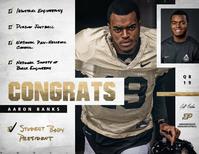 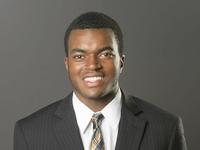 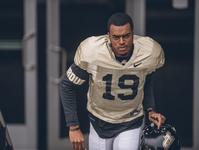 Boilermaker #19
(Photos/Purdue University)
How did a football-playing IE senior decide to go into student politics? A friend advised him to “ride your own wave” - and he won the Purdue Student Body presidency for the upcoming school year.
"After I initially got involved in Purdue Student Government (PSG), I recognized ways that I could positively impact the campus if I were elected," said walk-on Boilermaker football quarterback Aaron Banks. "That was the driving factor that motivated me to run for the position."
Banks, from Indianapolis, chose to attend Purdue primarily because of its engineering reputation. A secondary reason was his love of football.
"I was recruited as a preferred walk-on so I didn't have to try out," said Banks. "I love football so it was an easy decision for me to play."
He decided to major in industrial engineering because IE fits into his big-picture style. "I am someone who has large, broad goals and IE fits right into that mold. IE allows me to have the optionality to chase a career in whatever interests me - whether that is sports, politics, consulting, or entrepreneurship," he explained.
Banks chose his vice presidential running mate, Olivia Keller, a senior in Strategic and Organizational Management, when he recognized they shared a mindset and vision for campus, and would work well together because of similar temperaments.
He doesn't have a lot of free time, but outside of IE and football, he's involved with the National Society of Black Engineers (NSBE), the Minority Engineering Program (MEP), and represents his fraternity, which is in the National Pan-Hellenic Council.
He's also taking advantage of some of the "beyond the classroom" activities offered by Purdue IE, interning this summer as a consulting analyst at Accenture in Chicago. He's also working on several start-ups with friends and may try to study abroad before graduating.
Banks has this advice for fellow students: "Stay open to possibilities and don't ever marginalize yourself to one path. There isn't just one path to success (whatever your idea of success may be), so don't feel discouraged if someone else appears to be on a 'better' path than you."
As Purdue Student Body President, he hopes to spark a stronger feeling of inclusivity amongst students on campus. "I know that this is a very large task and that I only have a year in office, but I want to make sure that by the time I leave, the Purdue community has taken a large step forward towards reaching this goal," said Banks.
Writer: DeEtte Starr, starrd@purdue.edu
Related links:
Indianapolis Star And in his spare time, Purdue's student body president plays qb
WLFI Purdue's walk-on quarterback runs for student body president
IE News Archive
Upcoming Events
No upcoming events
More events...