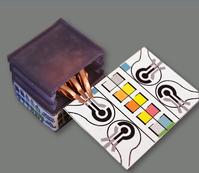 In its September 2017 issue, the journal describes the Self-powered Paper-based Electrochemical Devices (SPEDs) developed by Martinez's FlexiLab as "a cheap and disposable test powered by your fingertips [that] could bring a range of useful diagnostic test options to low-resource settings."

"We hope the low cost of SPEDs can make this technology easily accessible to a large number of pathologists, especially those working at the point of care," the journal quoted Martinez as saying. "We also hope 'paper tests' could aid in testing people who fear needles, and in getting large populations tested quickly using the minimum amount of resources."

Read more: New medical-diagnostic device made out of paper