“Deploying” to Hawaii for HF research 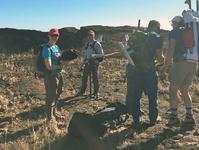 Along with IE Professor Barrett Caldwell, Hill is part of the Biologic Analog Science Associated with Lava Terrains (BASALT) team studying human response in Mars-like environments. Their deployments took place on Mauna Ulu ("growing mountain"), an eruption site located on the most active volcano on the island of Hawaii, Kilauea.

The only member of Caldwell’s Human Factors research team who was able to participate in this deployment, Hill joined about 30 other BASALT researchers from different institutions. Caldwell is serving for one year as a Jefferson Science Fellow in Washington, DC, and was unable to attend this deployment.

"I collected biometric data from the people who were acting as the astronauts as they collected the samples for the geologists and biologists. [It] gives me lots to work with," said Hill.  "The overall deployment was successful!" She plans to use the data for her Master’s thesis and possibly a future PhD thesis.

This past July she deployed with the BASALT team to Craters of the Moon National Monument and Preserve in Idaho, and hopes to return to Hawaii next year to continue research. According to an article in Popular Mechanics, Kilauea in Hawaii and Craters of the Moon National Monument in Idaho make good research sites for simulations because their volcanic terrain is similar to Mars.