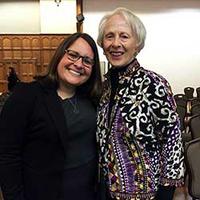 The award recognizes contributions made to the mentoring of women at Purdue and in the community. There are two awards given every year (one to an undergrad and one to a grad student) by Emily "Emmy" M. Wadsworth at a joint dinner hosted by the undergraduate Women in Engineering Program (WIEP) and the Graduate Mentoring Program (GMP).

Jahn says that her “personal mission to try to reconstruct the culture of several graduate student organizations by encouraging students to be open, inclusive, and supportive of one another while still maintaining their high performing drive.” She believes that the members of an organization are able to get more accomplished by sharing their individual skills, resources, and support tools with one another. As the elected president of three different organizations, she uses this strategy of leading and mentoring students in the Industrial Engineering Graduate Student Organization (IE GSO), the Human Factors and Ergonomics Society (HFES), and the newly-founded Industrial Engineering Graduate Women’s Group (IE GWG). Jahn works with others to create opportunities for women to engage and peer mentor each other through planned events and new communication channels through IE GWG. As she approaches graduation, she’s planning for each club's transition. Jahn says, “I believe that the best legacy I can leave behind is a knowledgeable, empowered group of students...[to] surpass my achievements and continue the success of IE GWG.”

Emily M. Wadsworth earned a PhD degree at Purdue University and served as assistant director of the Women in Engineering Program from 1991 to 1998. During that time, she created and administered both the Undergraduate and Graduate Mentoring Programs for females in the Schools of Engineering at Purdue. The programs were recognized in 1997 with a Presidential Award for Excellence in Engineering Mentoring from President William Clinton at the White House. This particular award was and is administered by the National Science Foundation.

Wadsworth wrote this about the value of mentoring: “Together we have discovered how to nurture human relationships through giving much, and in the process we are receiving back or gaining more.”

Wadsworth and her husband sponsor the Emily M. Wadsworth Graduate Mentoring Awards, which are $1,000 scholarships for one graduate student and one undergraduate student in engineering at Purdue who have been exceptional mentors for others. She retired from Purdue in 1998.