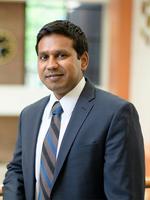 ChE’s Dr. Rajamani Gounder along with Dr. Neil Schweitzer, Northwestern University and Dr. Robert Rioux, Penn State University, received NSF and DOE funding to organize a series of workshops on the rigor and reproducibility (R&R) of research in the heterogeneous catalysis field. This effort was recently highlighted by Nature Catalysis in an interview with Gounder, Schweitzer, and Rioux about the issues surrounding R&R in the catalysis field.

The latest workshop took place at the Big Ten (B1G) Conference Center in Rosemont, Illinois on July 21-22, 2022 where experts made strides towards assessing the current state of R&R in experimental catalysis research and developing recommendations and best practices for future research in the field. The first installment of this workshop series began as a virtual symposium earlier in the year (April 2022), where organizers invited speakers from other scientific fields such as psychology, chemistry and material science, to get their perspectives on actions being pursued to improve R&R in their fields.

“We know that researchers in other scientific fields have already begun to improve rigor, reproducibility and measurement standardization. There is growing interest and momentum within our community to do the same for heterogeneous catalysis.  A common perception is that it is difficult to meaningfully improve R&R for experimental measurements in catalysis research because they involve a high degree of complexity, but that doesn't mean we can’t make progress as a field towards establishing community-accepted best practices for ensuring high-quality, benchmarked, and reproducible data,” Gounder said.

For the second installment of the workshop series, a group of roughly 70 participants from various employment sectors and career stages gathered for the in-person workshop to identify various types of catalytic measurements and materials commonly used in early-stage research and practical applications, and began to define best practices to improve the R&R of experimental measurements and benchmarking of material structure and performance.

Gounder explained the traditional scientific research process has naturally built-in mechanisms for self-correction, mainly through follow-up studies performed by other laboratories that either falsify or provide further corroboration of the findings in an initial study. This process works, however, it can take years, decades, or even longer to work itself out. Urgent societal challenges related to accelerating the adoption of clean energy technologies and reduction in greenhouse gas emissions, such as the U.S. government’s strategy to achieve net-zero emissions by 2050, make it all the more important to improve the R&R of scientific research being performed in fields such as catalysis that underpin the technologies key to achieving these targets. Improvements in how research is conducted by scientists working in the same field could expedite the development of technologies to reduce the carbon footprint of our chemical and energy industries. This type of research is a part of the NSF Engineering Research Center for Innovative and Strategic Transformation of Alkane Resources (CISTAR) mission where Gounder is a member of the research team.

“Heterogeneous catalysis is a key component of CISTAR’s processes. We need to be able to compare catalysts and processes that CISTAR is developing and pioneering to existing catalysts and incumbent technologies. These evaluations can benefit from community-accepted best practices in benchmarking and evaluating the performance of new catalytic materials and processes,” Gounder said.

The organizers are now writing an open-access technical report that summarizes the workshop’s scientific recommendations and outcomes, with the goal of streamlining actionable changes to research methods performed in the field of catalysis. In order to help steward these changes, they are formulating future plans that include reconvening similar workshops as instrumentation, methods and materials advance in the field or as new problems of interest are being studied by the catalysis community.