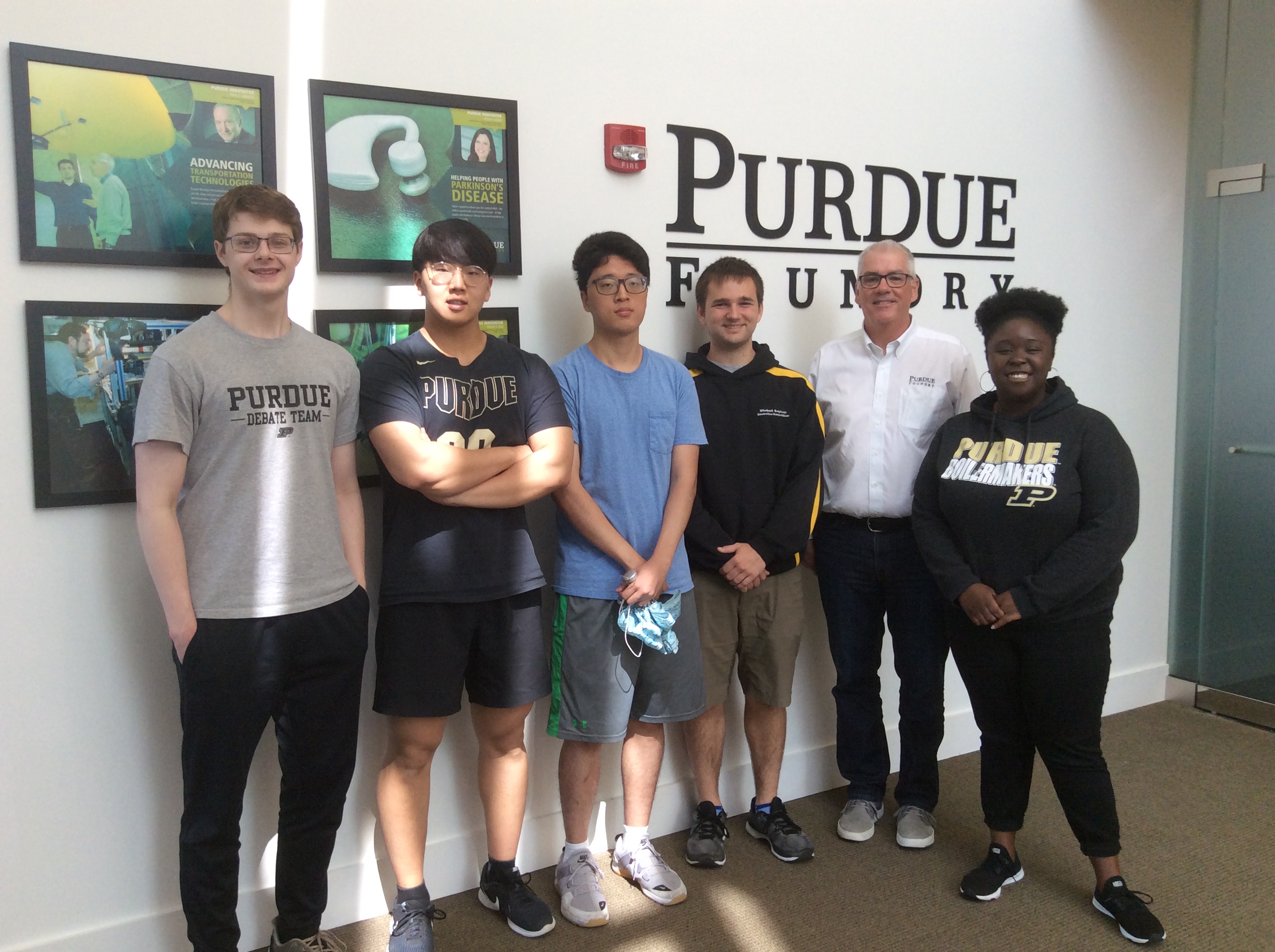 The ASPIRE Internship allowed these successful competitors from the 2018-19 Purdue Student Soybean Innovation Competition to continue working on their soy-based products, by participating in research and customer delivery activities on campus full-time for 9 weeks during the summer.  These Students conducted research, attended professional development seminars, built their research network, and advanced their soy-based prototype toward commercialization and/or a student start-up company.

"Our GRABIT awards are designed to stimulate the science and technology communities, to bring us relevant tools that our growers and processors can use to better manage the relationship between plant and animal agriculture," said Corsi, vice president of produce and floral for Wegmans Food Markets. "These new awards are just one of the ways that CPS has revamped our research funding programs, to be more flexible and responsible to industry's needs."

FUELING CHANGE, ONE BIOMARKER TOOL AT A TIME

"We know that produce growers are aggressively searching for better methods and tools to identify product contamination, so that they can then eliminate suspect material quickly to prevent cross-contamination of healthy product downstream.  Until now, that focus has mostly on pre-harvest and finished product testing," said Nano Reagents LLC's Byron. "Now, our company is focusing on the fundamental building blocks of testing, using a new class of reagents to provide growers and processors with an entirely new capability that is fast, easy, inexpensive and accurate. This is a true breakthrough for fresh produce safety."

Innovation challenge funds like the GRABIT grants are one prong of CPS's newly-revamped research program. To reflect changing times in produce food safety, CPS's Board of Directors adopted a new strategic plan last year that refocuses CPS's research to be more flexible and responsive to industry needs. In addition to its ongoing focus on post-harvest control and intervention of Listeria monocytogenes and the new challenge grants, CPS has also just called for research to study antimicrobial water treatments, and can now fund rapid response research to address urgent topics, in coordination with industry partners. To learn more about CPS's new strategic plan, view our new annual report. 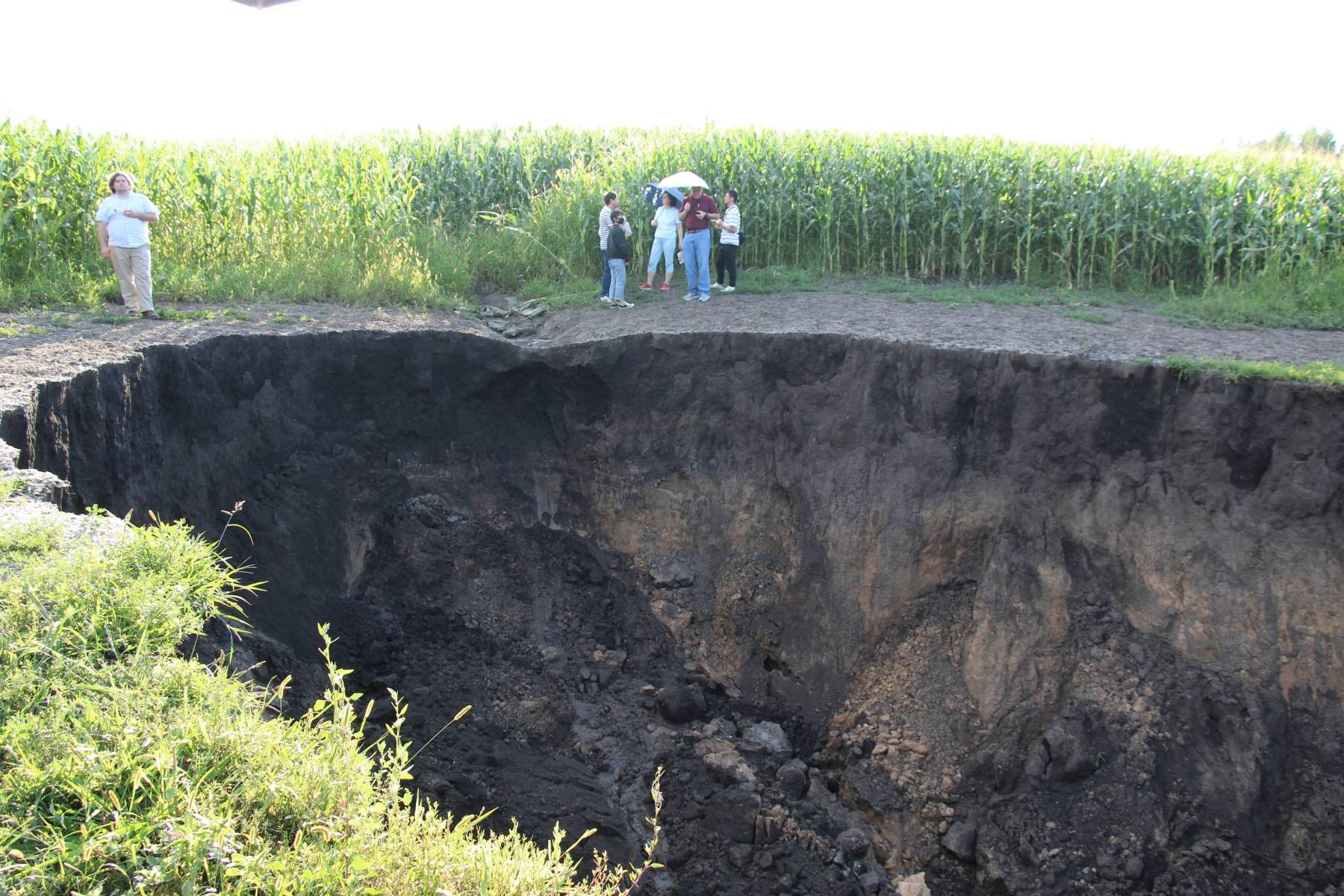 ABE Adjunct Professor Dennis Flanagan and graduate student Ryan McGehee visited the northeastern Mollisol region of China in mid-August. They flew into Beijing on August 13, then flew to the city of Harbin about 750 miles to the northeast. From there they traveled by van north through large areas of corn and soybean fields in this major grain producing region of China, to the city of Keshan.  They visited several field sites that had some extreme gully erosion visible, and also saw some conservation practices aimed at slowing the gully advances (check-dams, grass waterways, etc.).  Gully erosion is a severe problem in this region, and is threatening roads and fields. They also visited the Keshan Station of the Institute of Soil and Water Conservation in Heilongjiang Province, which had numerous soil erosion plots as well as a large dam and sediment retention basin to control gully erosion. The dam was very effective at controlling advance of the gully. Next stop was in Changchun, for  a workshop presentation on the Water Erosion Prediction Project (WEPP) model at Jilin Agricultural University to about 40 students and faculty from several institutions, on August 18-19.

On August 20, Dennis returned to the United States, but Ryan remained in China and traveled to Northwest Agriculture & Forestry University in Yangling, in the Loess Plateau, 1300 miles southwest of Changchun.  He will be in Yangling and then Beijing until September 11, before returning to Purdue.  During this time Ryan is working with students and faculty on a project to apply erosion prediction models to the Mollisol region in northeast China, as well as conducting seminars and workshops. He is helping our Chinese cooperators convert their observed field soil, cropping, and weather data into forms that the erosion models can use.  Travel funding support for Dr. Flanagan and Mr. McGehee was provided by a research grant from the Chinese Ministry of Science and Technology (MOST).

Picture at top: Visiting a field site with severe gully erosion on August 15. This gully had taken out a farm road, and advanced about 90 meters in the past year. Purdue ABE graduate student Ryan McGehee is on the left. 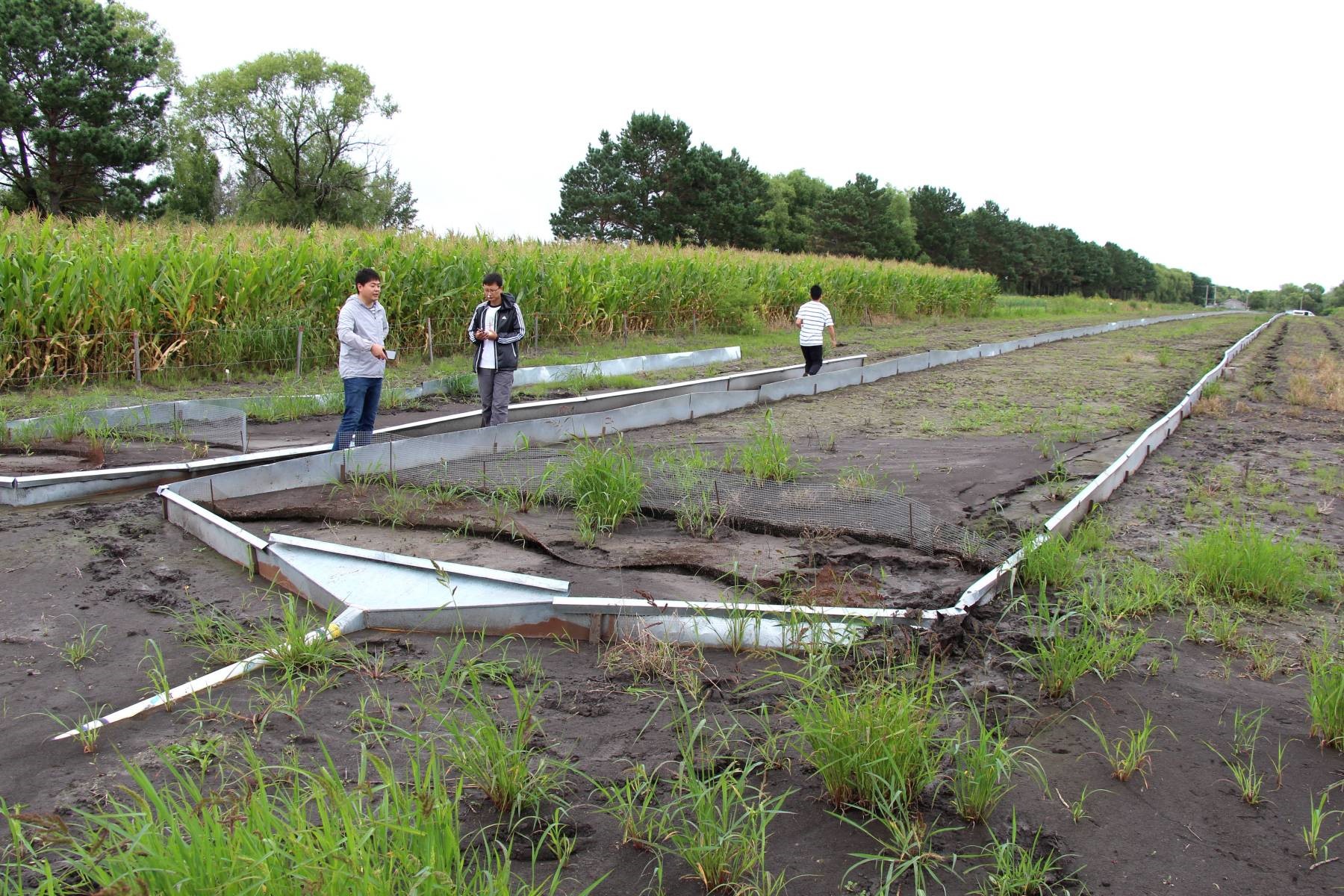 (Above) Bottom of a very long (300 meter) erosion plot at the Keshan Station of the Institute of Soil and Water Conservation in Heilongjiang Province, August 16, 2019. 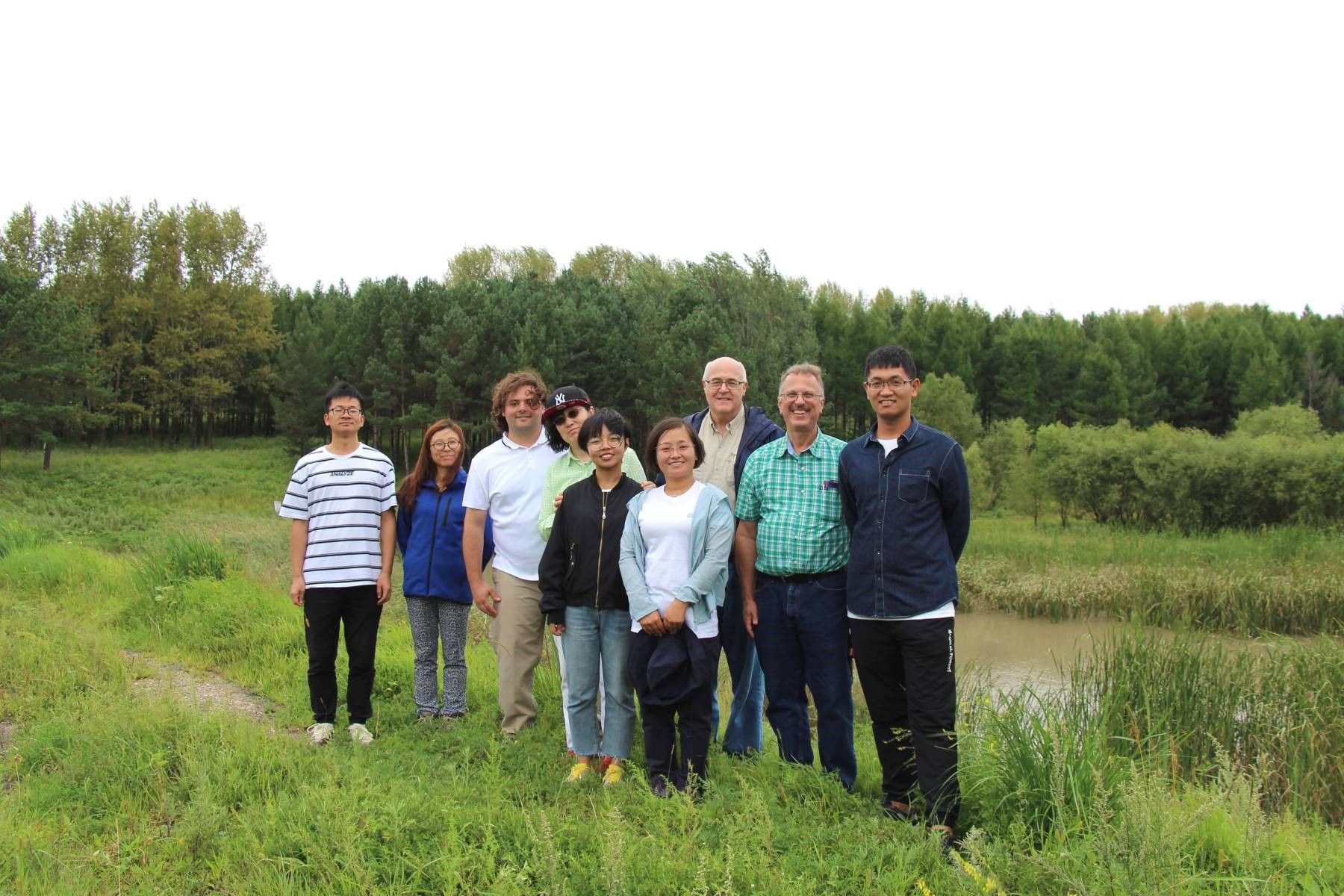 (Above) Part of the tour group on top of an earthen and stone dam, with a sediment retention pond above it to control gully advance, at the Keshan Station of the Institute of Soil and Water Conservation in Heilongjiang Province. Dennis Flanagan is second from right; Ryan McGehee is third from left. August 16, 2019. 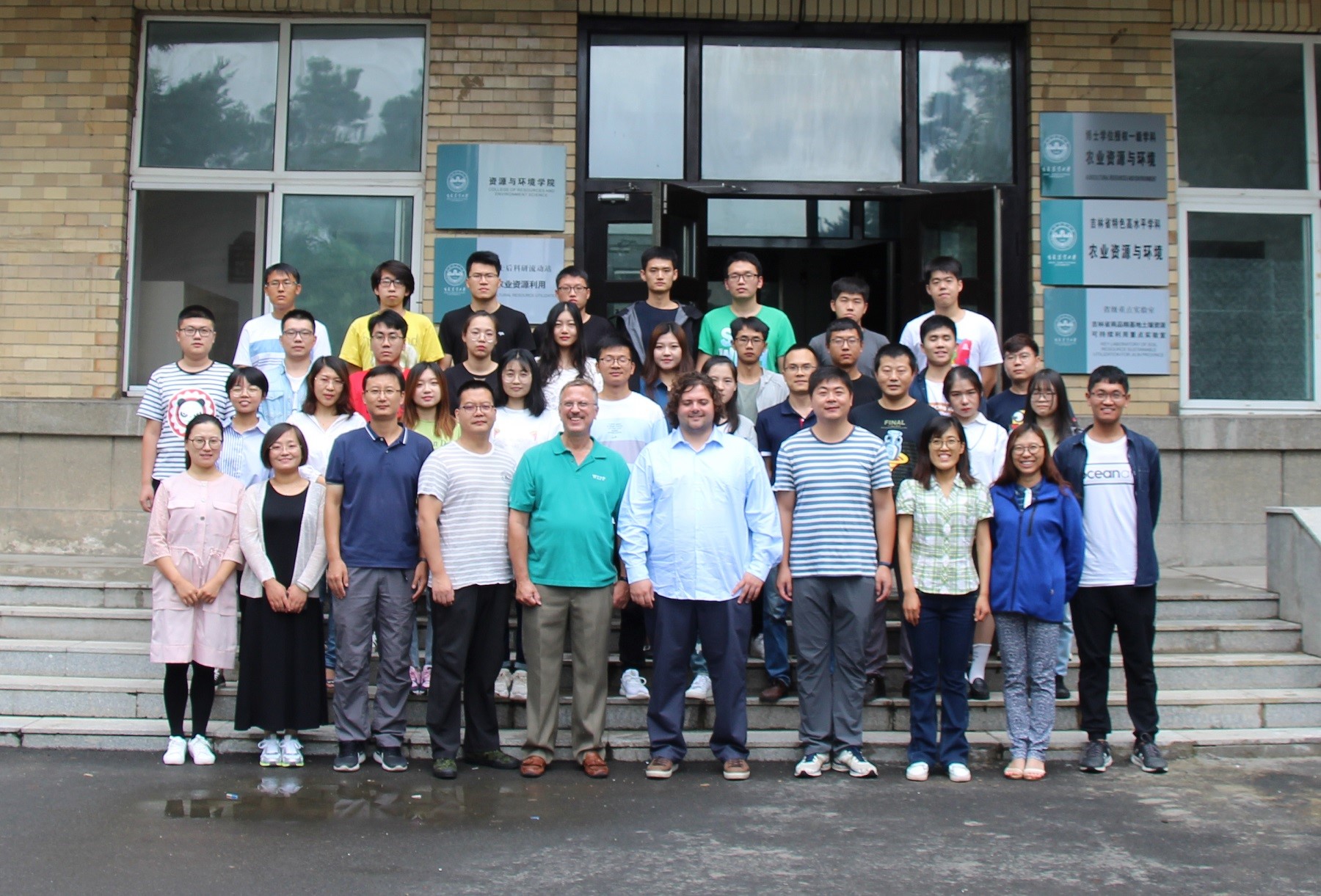 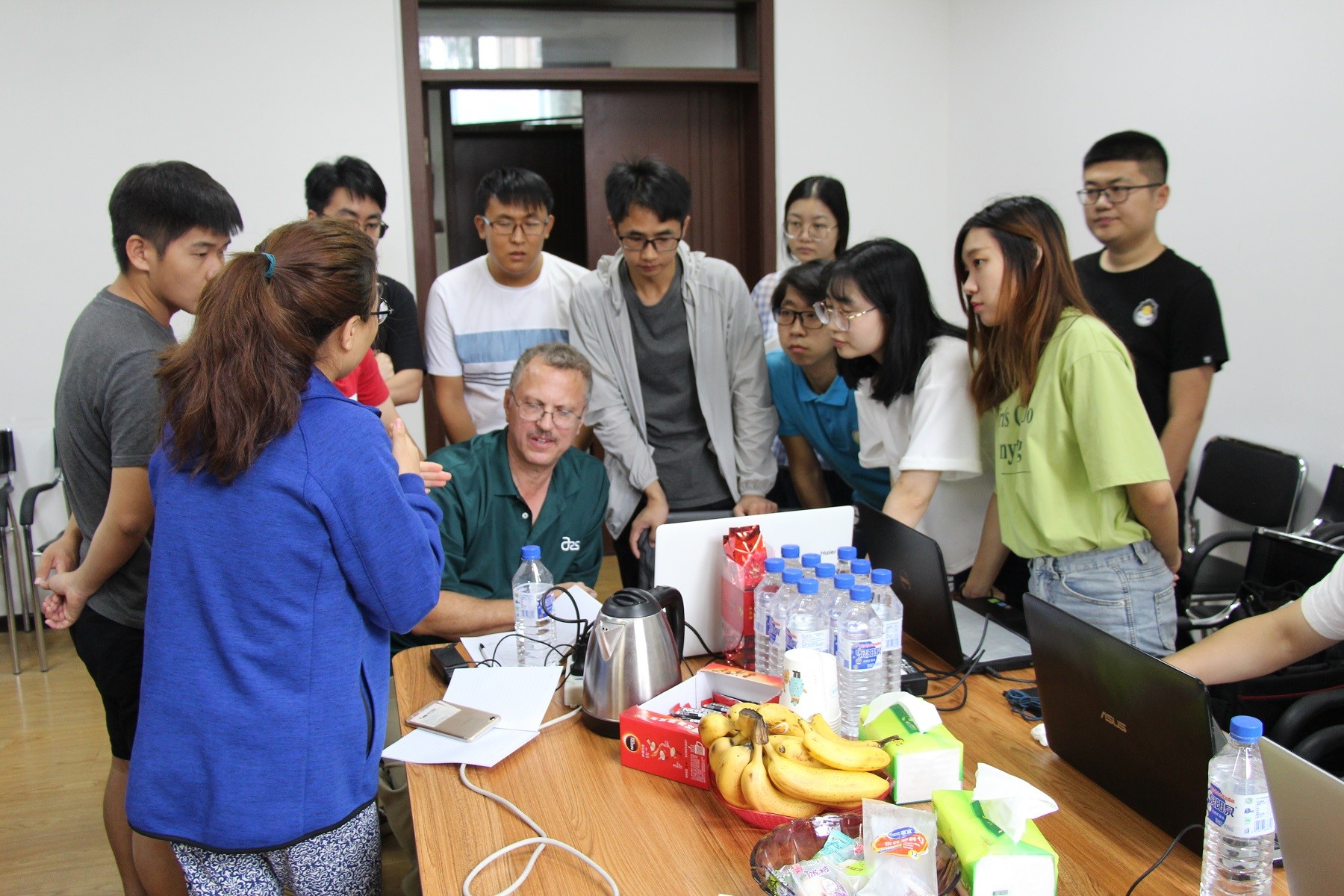 In July 2019 Dr. Jian Jin's group deployed a new field hyperspectral imaging gantry system in Purdue’s research farm (pictured left). The system is located at ACRE behind the Indiana Corn and Soybean Innovation Center building. The imaging gantry will be used to scan the crops growing within its 150-foot imaging range and predict the physiological features of the plants including drought stress, nutrients status, disease symptoms, and so on. Compared with similar systems recently constructed at the University of Arizona and the  University of Nebraska, the Purdue system was uniquely designed and features high-resolution hyperspectral imaging, shadow-less operation, and continuous scan of the field every 10 minutes. One of Dr. Jin's research goals is to use this system to study how the Ag remote sensing images are impacted by the changing environmental conditions in the field, which has been a major limiting factor for the crop imaging quality. 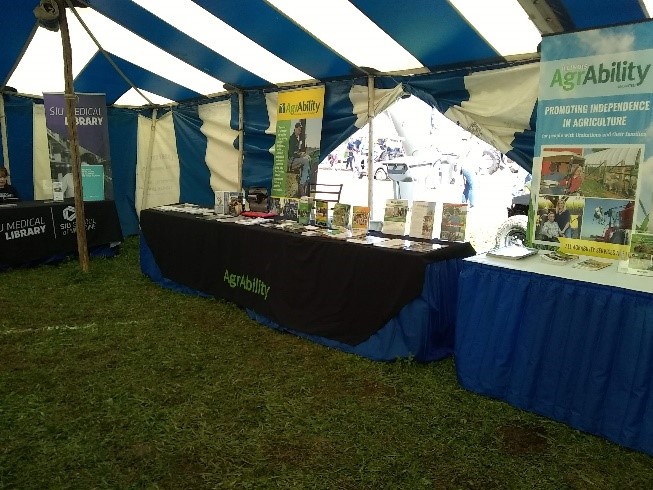 The National AgrAbility Project was one of many exhibitors at the 2019 Farm Progress Show in Decatur, Illinois.  Exhibiting jointly with Illinois AgrAbility Unlimited in the Health and Safety tent was coordinated by Kelly Gagnon from Illinois AgrAbility Unlimited.  The three-day show provided an opportunity to give attendees information to farmers and ranchers and their families with disabilities how they might continue farming with a disability.  The displays included NAP publications and Illinois AgrAbility publications and an Action Track Stander power wheelchair and an adapted Polaris Ranger utility vehicle. 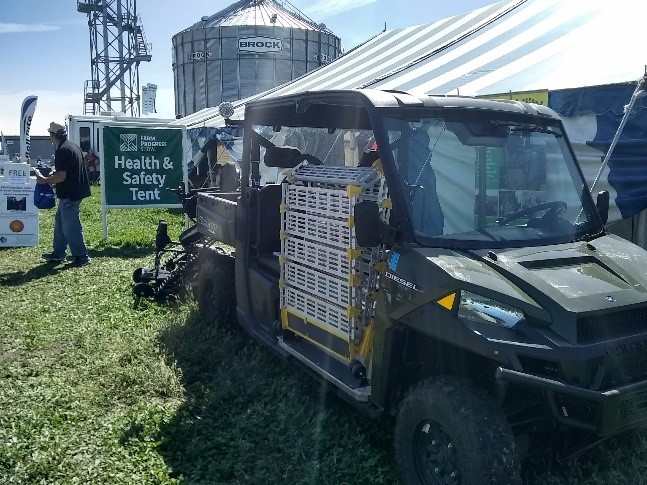 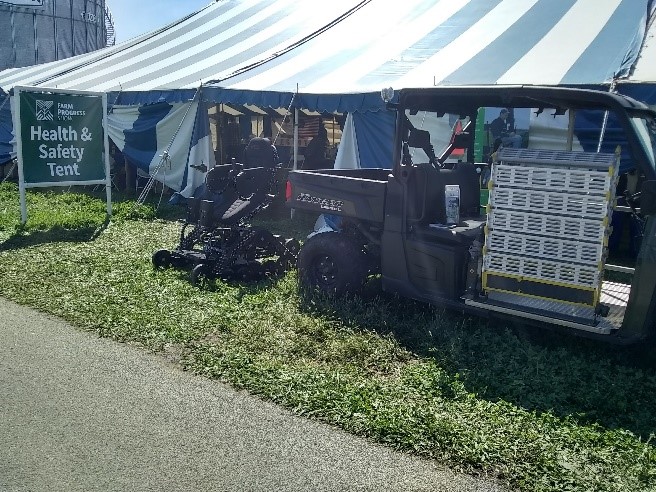 Indiana AgrAbility also took part in the Purdue Extension displays in the Agriculture/Horticulture building for two days of the Indiana State Fair as a rotating exhibit.  The display was similar to the one in the FFA Pavilion with the exception of the John Deere tractor and lift. 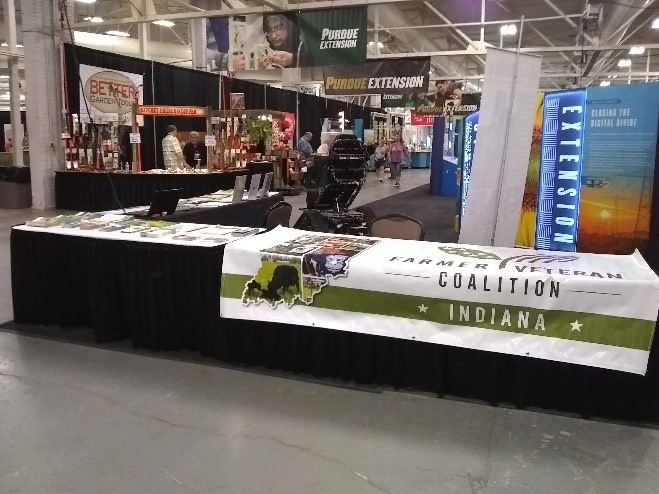 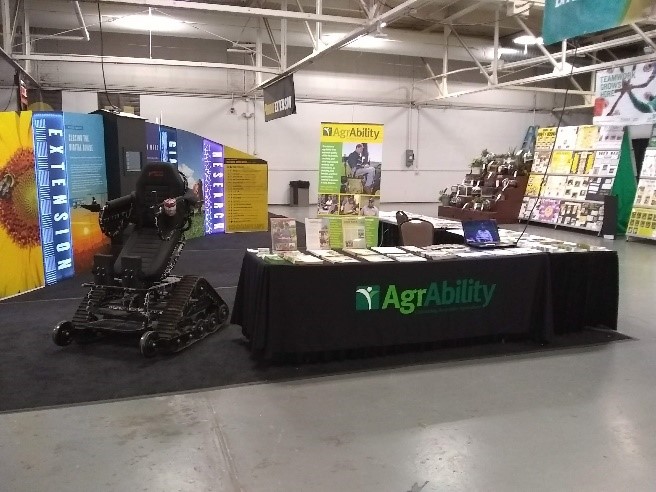 Steve Swain, Indiana AgrAbility rural rehabilitation specialist, presented AgrAbility, farm safety, and assistive technology on the farm to the Agriculture Mechanization class at North Montgomery High School.  The class is part of the North Montgomery FFA chapter who was a past winner of the Bridging Horizons Community Service Contest sponsored by Indiana AgrAbility.  Class members asked many questions about AgrAbility and continuing to farm with a disability.

Find out how you could win CA$H at the Call-Out!

Thanks go to the ABEGSA for organizing the food and the ABE staff for everything both behind the scenes and out in front to make everything go smoothly today and this evening.

Thank you to the faculty who made it to the picnic and/or contact session to talk with our new and returning students, alumni, guests, and for pitching in elsewhere, too!

These events wouldn't be possible without all of this help and the spirit of community in ABE that enables everyone working together.

Hope you all are doing well… just wanted to pass along some photos of the septic & curtain drain install.  I didn’t get a chance to see the actual Presby tiles uncovered, but you can see the system-sand mound.  This morning, John Hack was digging for the pump tank.  So, it’s all coming together nicely!

Many thanks for all you did for our family!

The work we do here matters! This is one of the reasons we have capstone/design projects. If you know of other stories we could share, please let us know.