This month, our ABEGSA leads the way.

See the flier for more information. (My apologies for the lack of image - the system is experiencing difficulties uploading at the moment.) 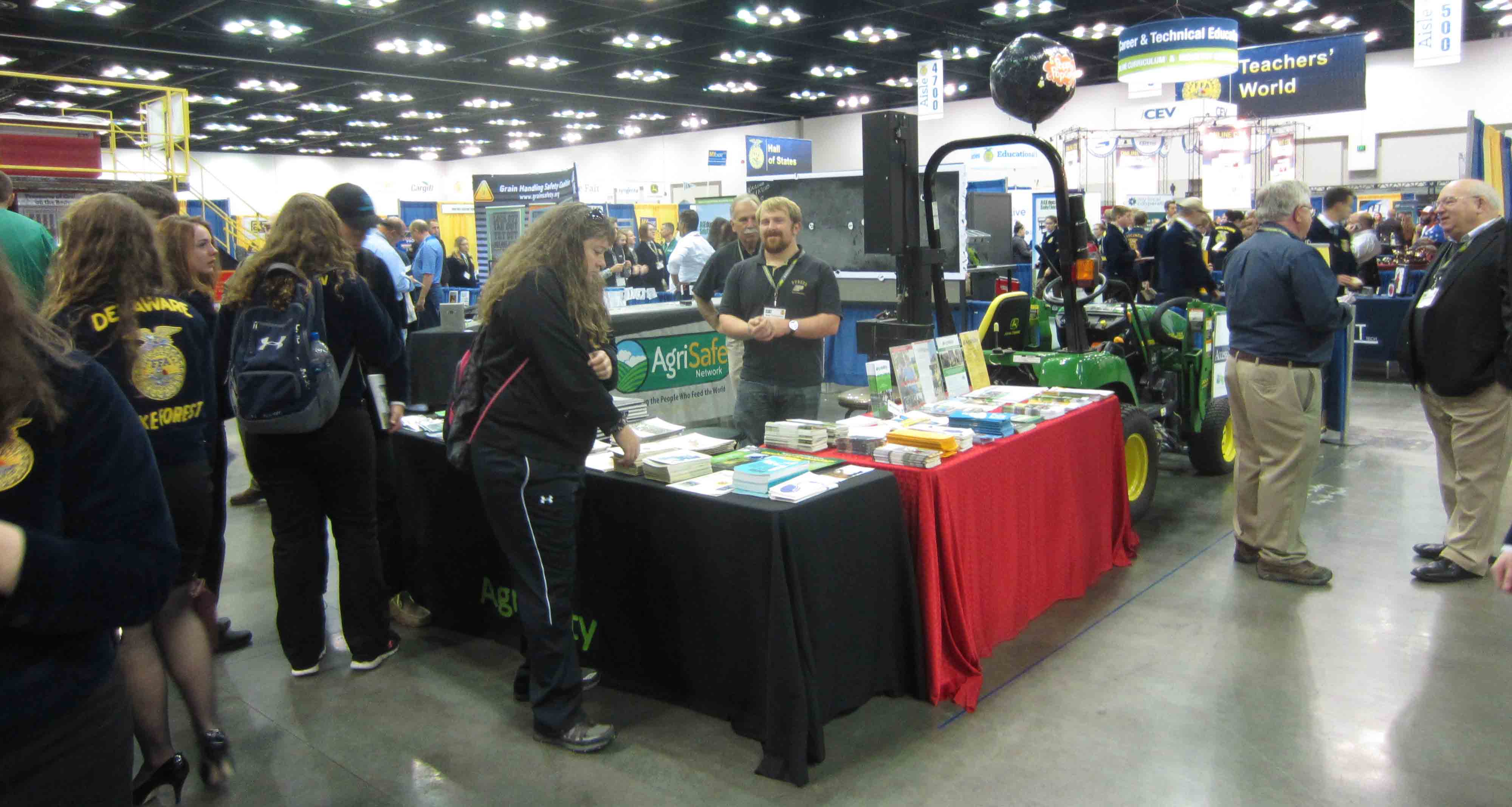 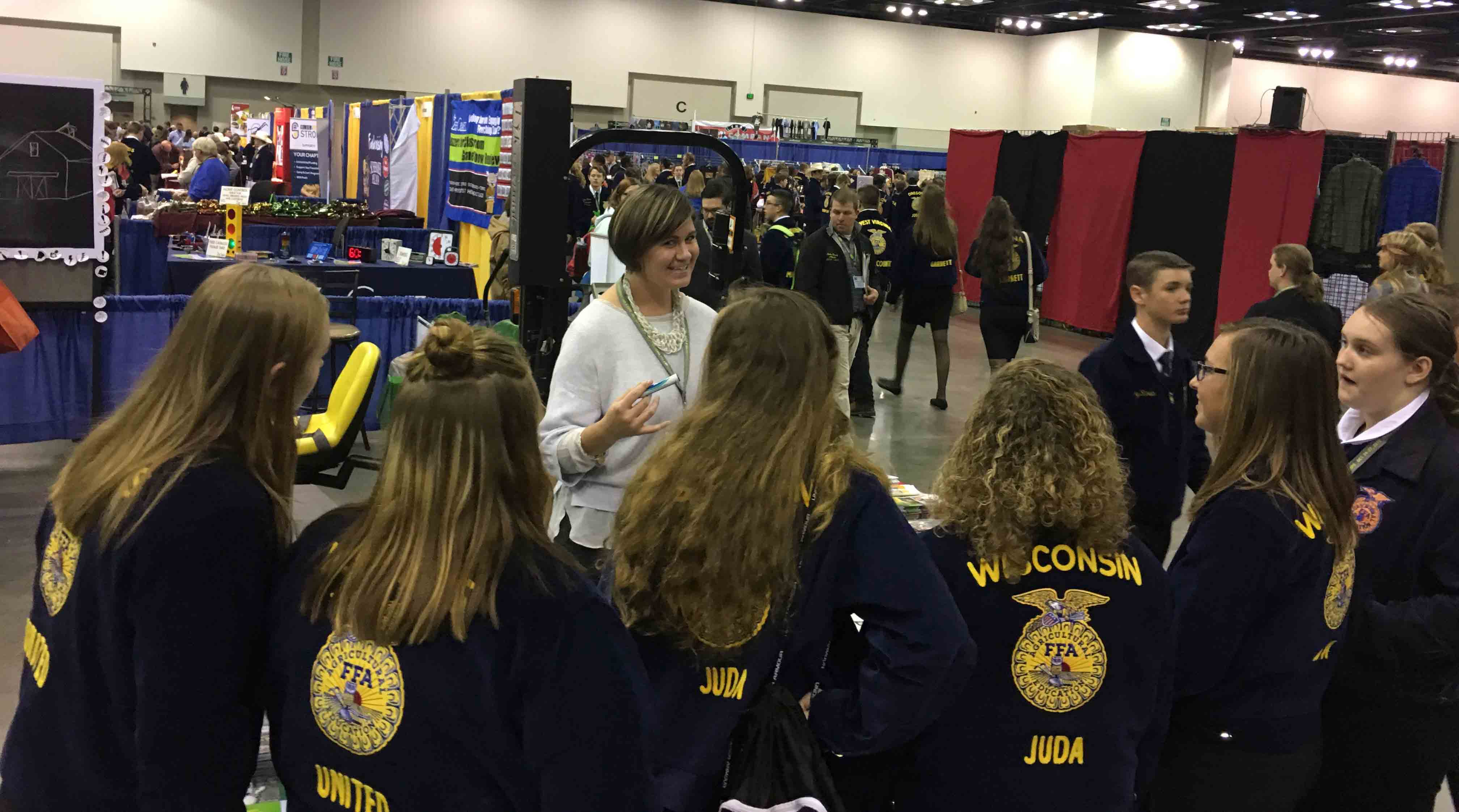 The National AgrAbility Project was one of eight health and safety organizations to exhibit in the CareerSafe exhibit (Safety In Agriculture for Youth – SAY) at the 2018 National FFA Convention in Indianapolis, Indiana. The NAP display included AgrAbility publications, health and safety publications, an AgrAbility popup, and a John Deere tractor with a Life Essentials lift.  Sierra Royster from APRIL and NAP/Indiana AgrAbility staff engaged the over 65,000 FFA members, parents, and advisors during the two-and-a-half day event. The FFA members and advisors were to get four out of the eight exhibitors to stamp their card in order for them to get a T-shirt. In order for them to get their card stamped, each organization did a presentation about their services. Many, many T-shirts were distributed. 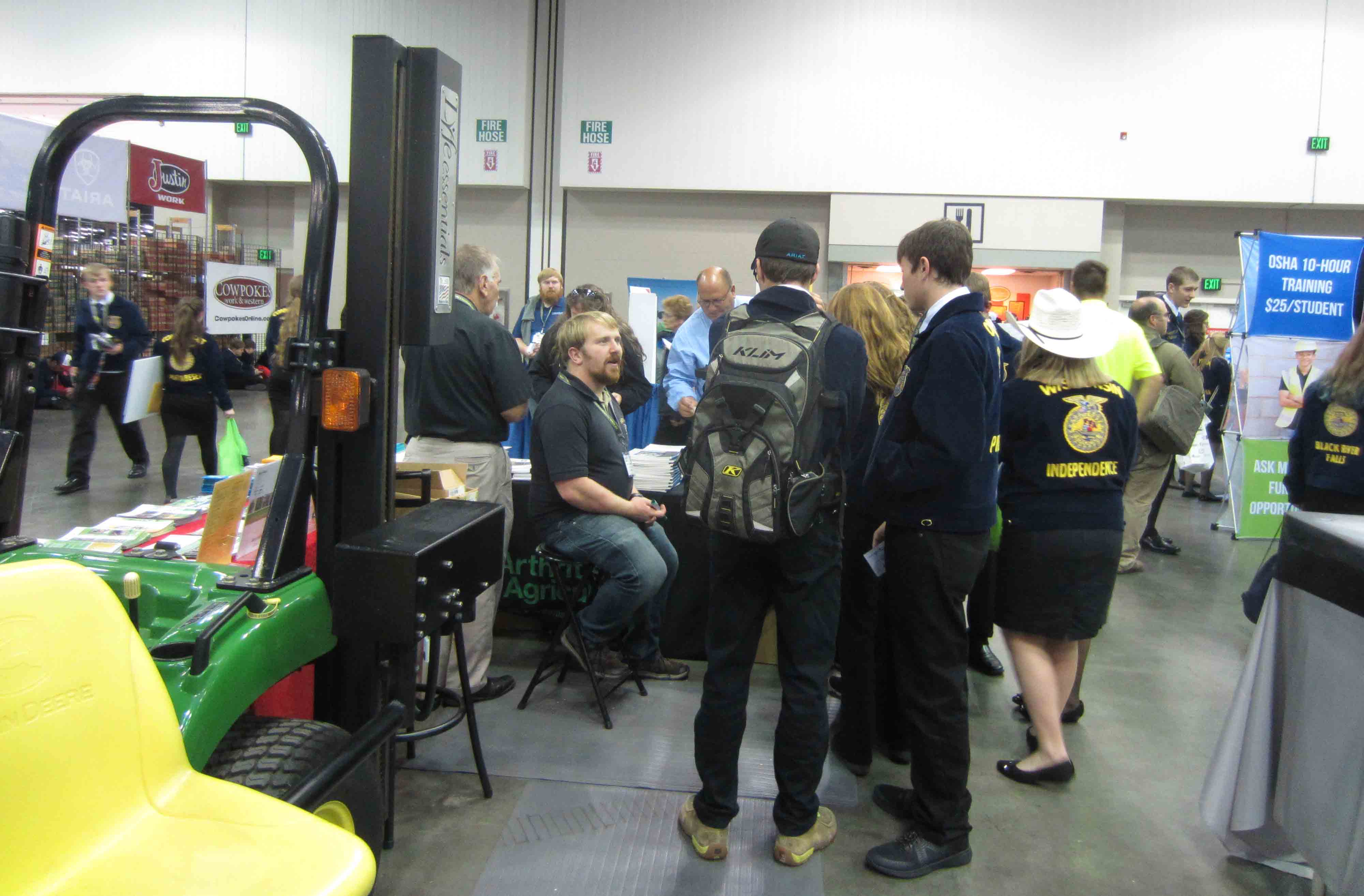 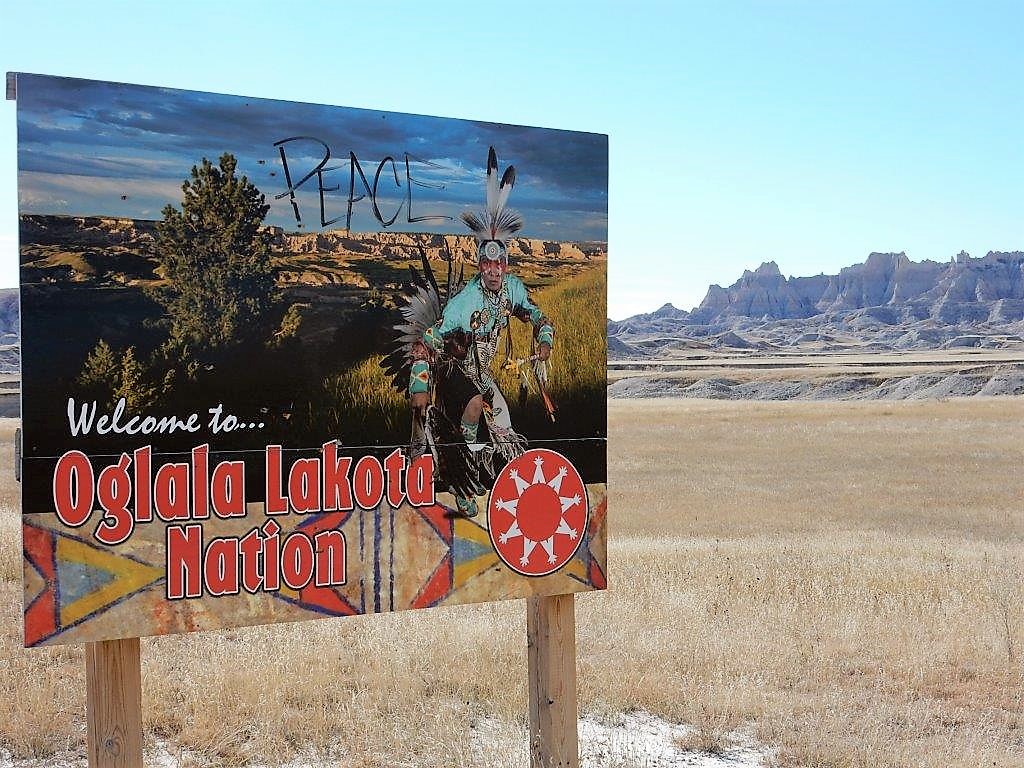 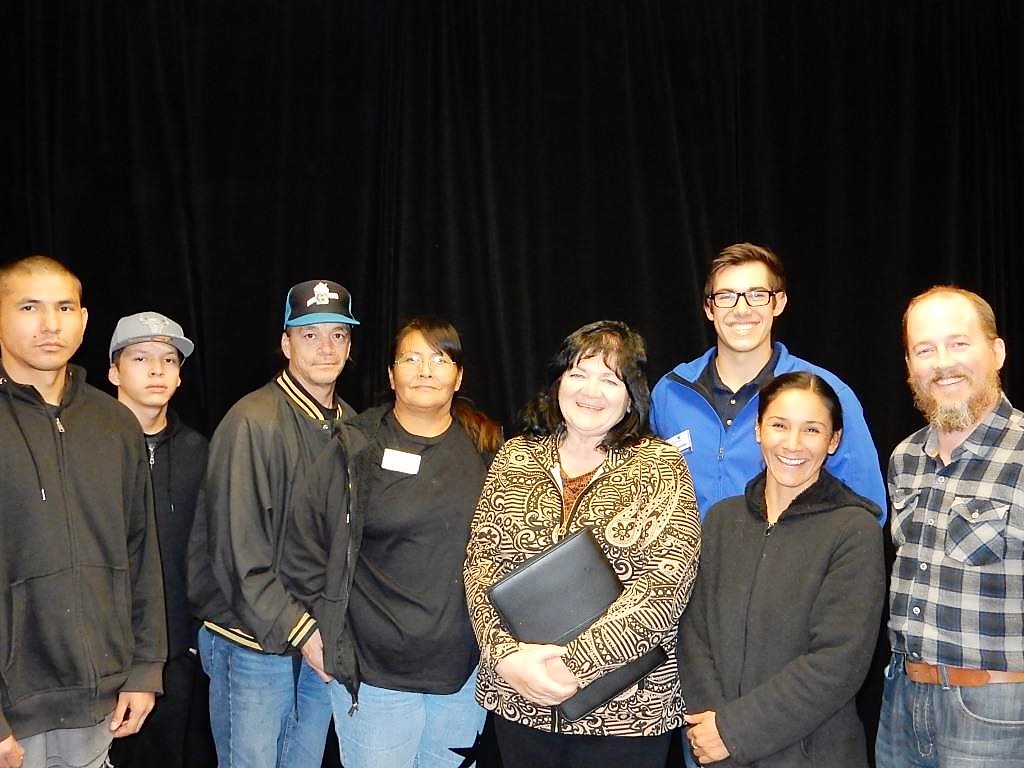 The workshop was the culmination of a relationship between Purdue’s NAP and SDSU Extension personnel who first met at the NAP’s National Training Workshop (NTW) two years ago in Knoxville, TN. Following that meeting with Extension educator Patricia Hammond (second from right in photo at right, next to Jason Schock, PI for the SD AgrAbility Project), who is also a member of the Oglala Lakota (Sioux) Nation, the NAP helped to bring two SDSU Extension educators and four Oglala Lakota members from the Pine Ridge reservation to the March 2018 NTW. The SD team was so excited by the possibilities they saw with AgrAbility, that they submitted a project proposal to NIFA, and were subsequently funded in September of this year.

Much of the focus of this initial workshop was on mental health solutions for tribal reservation members, using subsistence agriculture as a means of healing by providing a direction in life, a job where jobs are not readily available, eventual self-sustainability as clients learn to produce enough food to feed themselves and their families, and an upward boost in self-worth as clients who have been dependent users become producers and contributors.

Chuck and Paul were given a short tour of parts of the Pine Ridge reservation and were amazed both by the generational cycle of poverty and hopelessness that is so prevalent, and by the magnitude of the work proposed by South Dakota State University’s AgrAbility team to combat that cycle. It is anticipated that if this project succeeds over the course of the next four years, it could become a model for similar projects across the more than 300 Indian reservations in the United States, bringing hope to many. 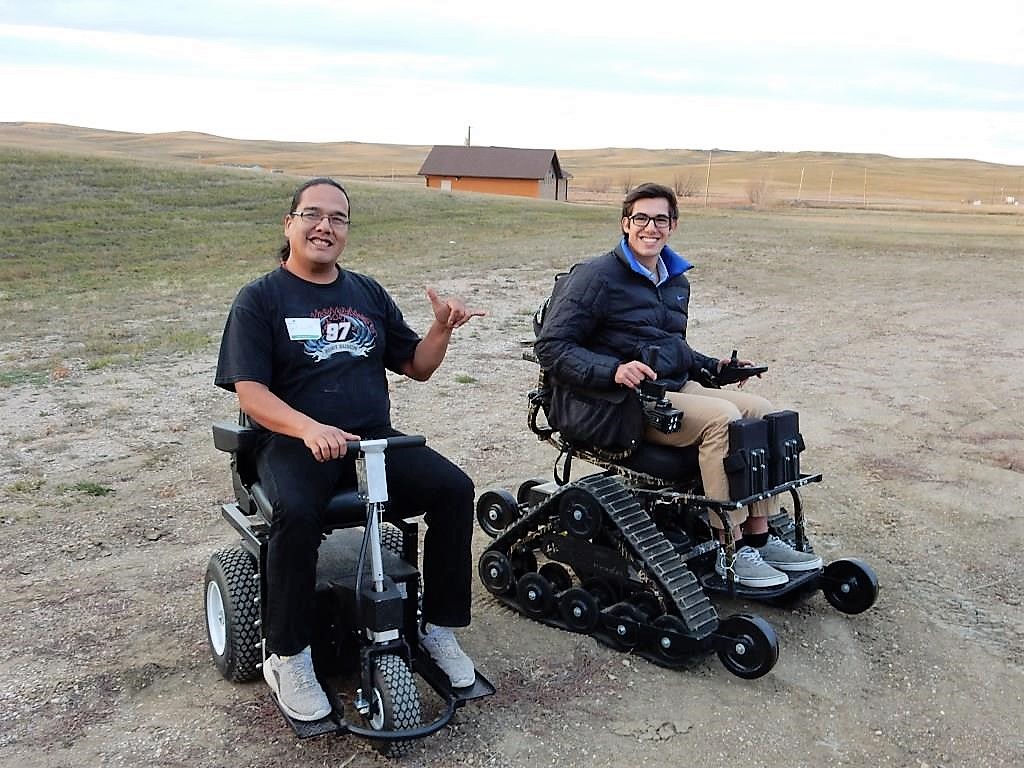 It was a privilege for Purdue’s National AgrAbility Project to be instrumental in encouraging this new work among the Native American population, as well as the non-tribal farmers and ranchers impacted by disability throughout South Dakota. 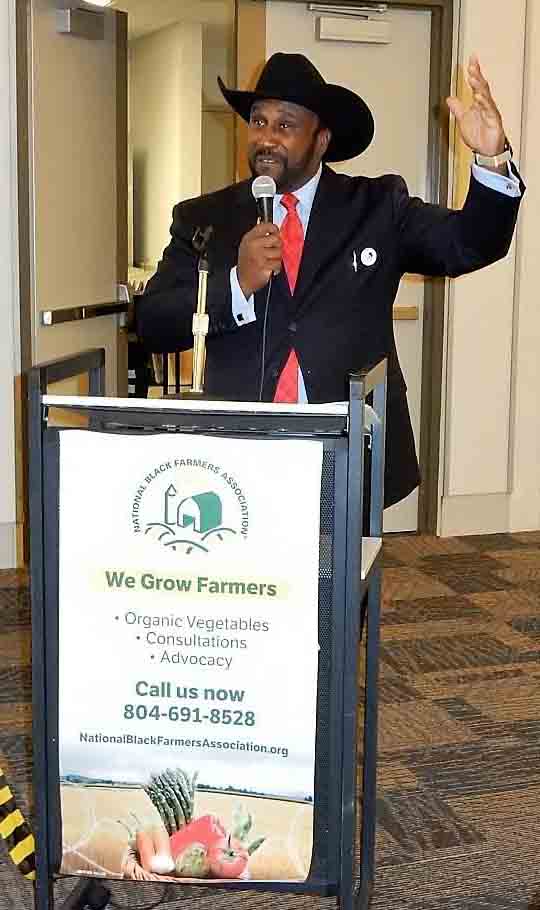 Chuck Baldwin attended the 28th Annual National Black Farmers Association (NBFA) Conference in Shreveport, Louisiana, November 2-3, 2018. Approximately 70 people were in attendance on Friday, with more that came on Saturday. Chuck shared the vision and work of Purdue’s National AgrAbility Project during a session in which he was joined by Mike Lewis, PI of the Kentucky AgrAbility Project, who shared further on AgrAbility’s work with veterans impacted by disability who are currently in, or interested in, working in agriculture. 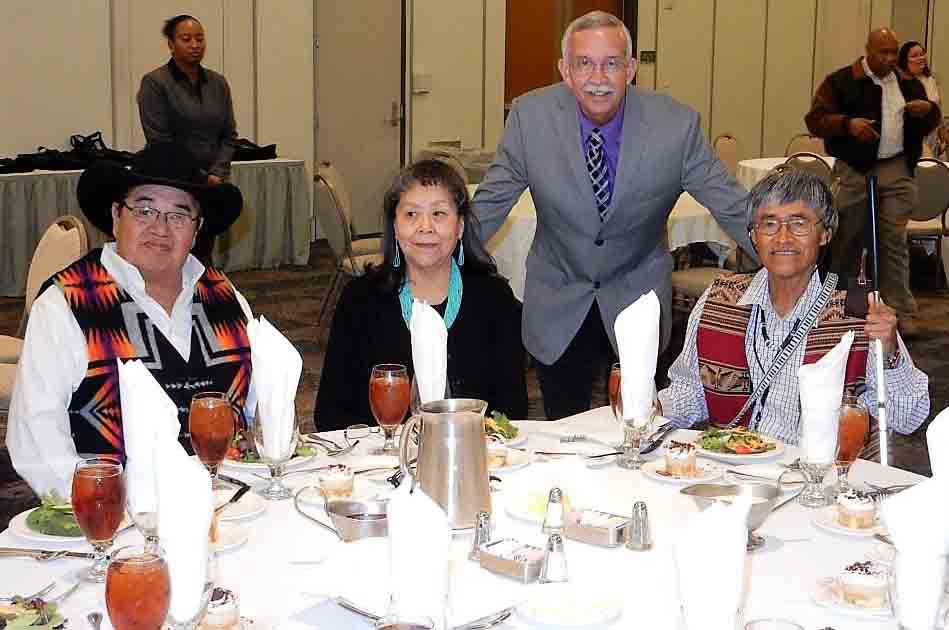 Because the NBFA conference is held in conjunction with members of the Association of American Indian Farmers, Chuck also had the opportunity to visit at length with three Native American farmers/ranchers who are interested in AgrAbility’s services. Pictured with Chuck (standing) are Richard and Jolene of the Crow tribe in Montana (left), and on the right, Gilbert from New Mexico.

Of particular interest to Chuck at this conference was his meeting with three African American farmers from Indiana. One couple comes from the heritage of Lyles Station, near Princeton, IN, where a number of African American farmers continue to work the land. The new Smithsonian National Museum of African American History and Culture has a modest exhibit dedicated to this small farming community in southern Indiana. There, according to USA Today, “free blacks settled, cleared the land and worked their own soil prior to the Civil War, a remarkable feat considering slavery was still the law of the land in half the country, including in Kentucky just 35 miles to the south.” The couple invited Chuck and AgrAbility to share at one of their next regular meetings with the African American farmers group. The other gentleman Chuck met was from the Fort Wayne, IN, area. All three seemed genuinely interested in having AgrAbility share the vision of improving quality of life for farmers and ranchers impacted by disability.

Following the NBFA conference, a Mississippi farmer with disabilities who heard Chuck and Mike speak contacted Chuck to request AgrAbility’s help for his situation. Appropriate contacts and information were shared with him concerning agencies in MS that could help meet the need. This is further verification that Purdue’s NAP is becoming increasingly known and appreciated among African American, Native American, and other underserved agricultural populations impacted by disability.

The Breaking New Ground (BNG)/Indiana AgrAbility Project held its semi-annual advisory team meeting Monday, November 5, at Purdue’s William H. Daniel Turfgrass Research and Diagnostic Center. Twenty-two staff and advisors were in attendance. The meeting focused on the need for a new BNG/Indiana AgrAbility project proposal for 2019-2023, as the current project’s funding ends August 31, 2019. Possible new directions, new and renewed partnerships, and the immediate need to determine priorities for the upcoming proposal were spiritedly discussed with all members taking an active role in the deliberations.

Dr. Dennis Flanagan and Dr. Chi-hua Huang from the National Soil Erosion Research Laboratory were invited to be keynote speakers at the 11th International Symposium on Agriculture and the Environment (AgroEnviron 2018), held October 14-18 in Nanjing, China.  Both are members of the symposium Scientific Committee. The very successful conference was attended by over 400 people, and included oral presentations, poster sessions, and a midweek field trip examining water quality issues and agricultural research sites. This meeting follows the 2016 symposium (AgroEnviron 2016) held here at Purdue in May 2016, which was chaired by Dr. Flanagan. 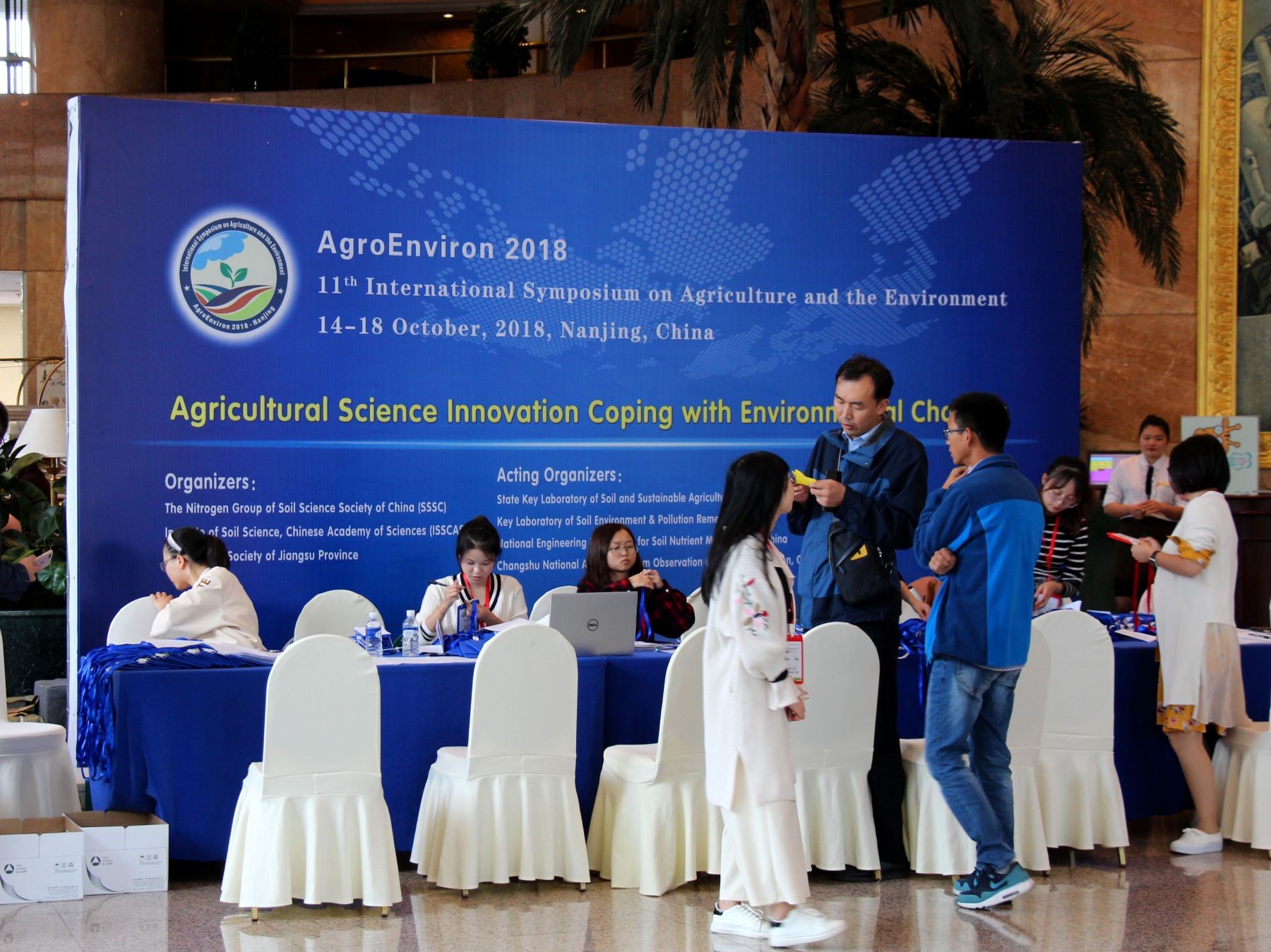 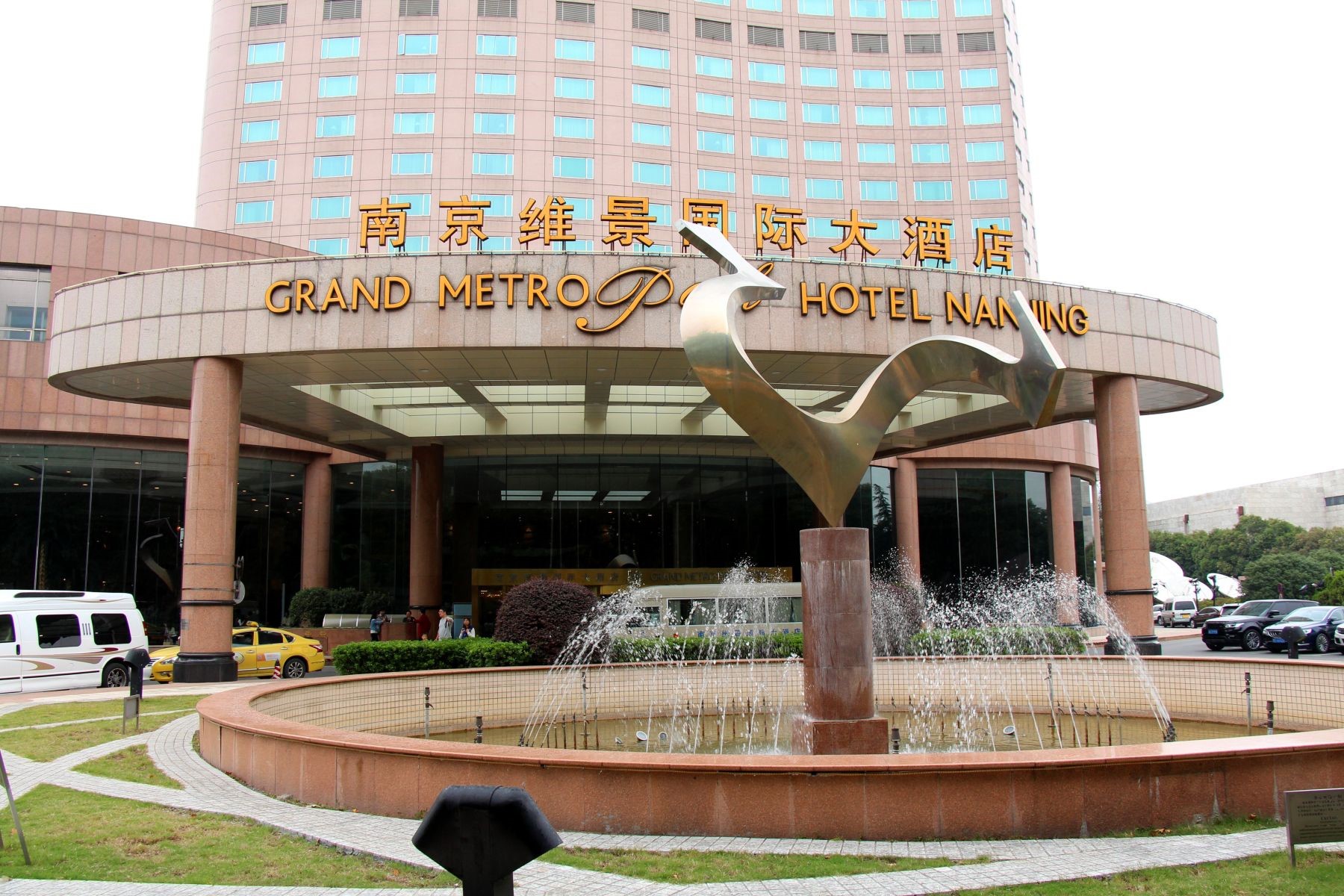 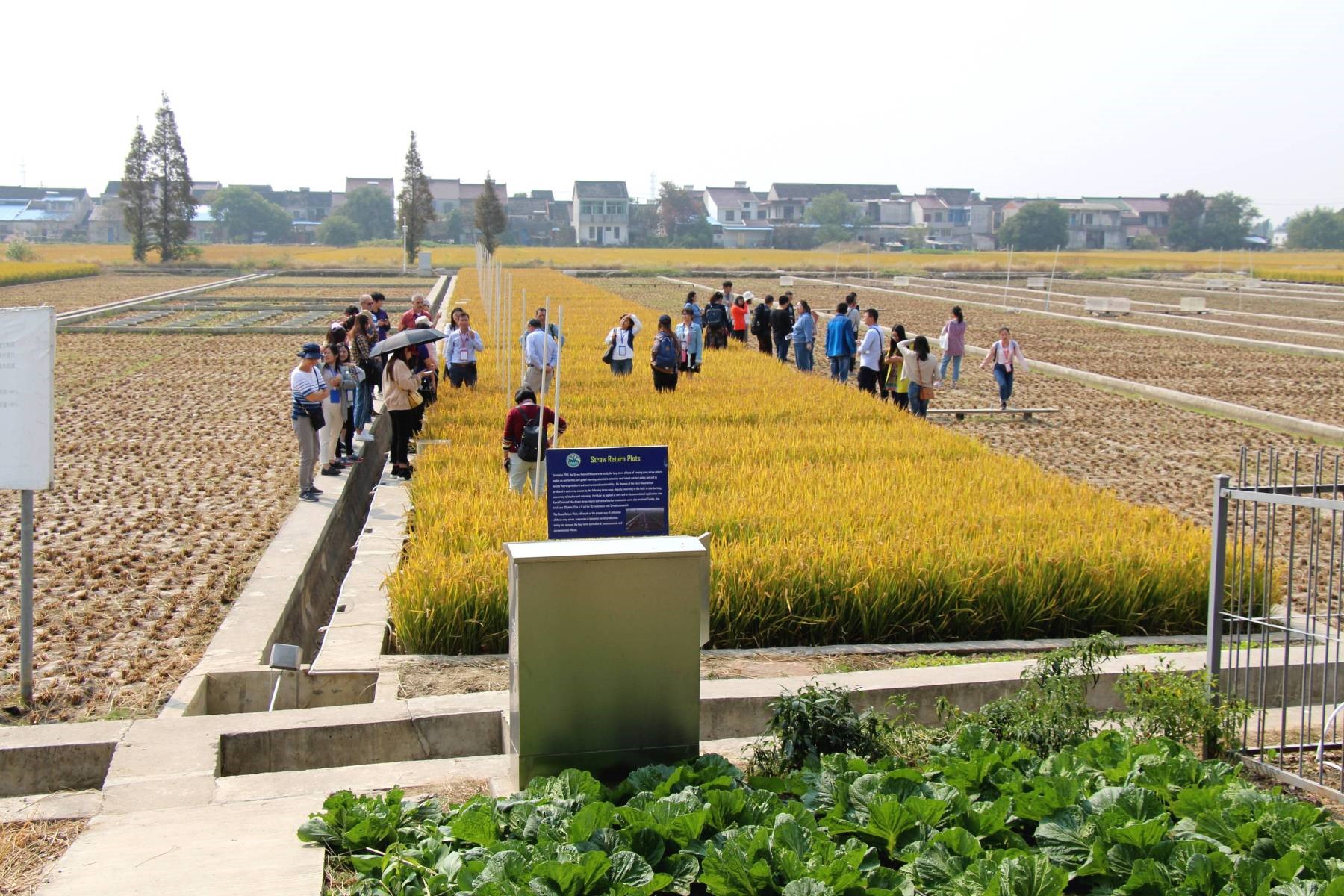 The picture to the left is on the Field Trip on Wednesday, October 17, to a research experiment station near Yixing, Jiangsu, China. Agricultural nonpoint source pollution is an extremely important problem here, affecting the large nearby Lake Tai. Lake Tai (or Lake Taihu) is a large freshwater lake in the Yangtze Delta plain that has experienced extreme pollution problems over the past 40 years. In these experimental plots, rice is being grown, and various treatments used, such as return of straw, biochar addition, etc.

Dharmendra Saraswat, Associate Professor of Agricultural and Biological Engineering at Purdue University, was invited by the Society for Plant Biochemistry and Biotechnology for a talk at the Indian Agricultural Research Institute (IARI) on October 8, 2018. Prof. Saraswat discussed the role of Information and Communication Technologies (ICT) in Food, Water and Energy Systems (FEWS). He provided examples using tools developed by his team for accelerating dissemination of science-based information to agricultural stakeholders and effective use of mobile and web-based tools for solving problems in FEWS. He highlighted the role of multidisciplinary team and collaborative working as key for developing impactful solutions.

Professor Dennis Buckmaster and Purdue colleagues Liz Karcher, Trevor Stamper, and Dan Guberman, delivered a panel presentation at the International Society of Scholarship of Teaching and Learning (ISSOTL) conference in Bergen Norway. The title was “Changing a Culture: The Use of Course Portfolios to Document Teaching and Learning.”  You can see the slide deck and a pointer to their portfolios here:https://docs.google.com/document/d/1nVUR4kvme5Y0bpOf5SmYHEhjuAXy9RMFiJZEeEQNOUg/edit

The Purdue Open Ag Technology and Systems (OATS) Center is officially launched with support from the Foundation for Food and Agriculture Research, Centricity, Winfield, Infosys, CNH, and ADM. ABE members currently include Dennis Buckmaster, Dharmendra Saraswat, and Jian Jin. Others are welcome. The OATS mission is to bring the power of open source to agriculture. https://oatscenter.org


Dr. Kevin Solomon and co-PI Dr. Briggs (Biochem) have partnered with two Department of Energy user facilities, the Environmental Molecular Sciences Laboratory (EMSL) and the Joint Genome Institute (JGI), to tackle outstanding issues in bioenergy. Together, the team is studying how anaerobic fungi that are essential to nutrition in the guts of cattle regulate critical enzymes needed to efficiently convert agricultural wastes into sugars for bioprocessing. Through this partnership, Purdue ABE will be able to leverage cutting-edge genomics and proteomics capabilities to accelerate development towards cheap biofuels

2018 November New Scholars on the Block

This is a newer feature to introduce our visiting scholars - please take a minute and check out what they are (or will be) up to! The images on the left are not large enough to read, but if you click on them, the larger PDF should load - please let Carol know if you run into difficulties (cmweaver@purdue.edu). (Click on image for larger version) 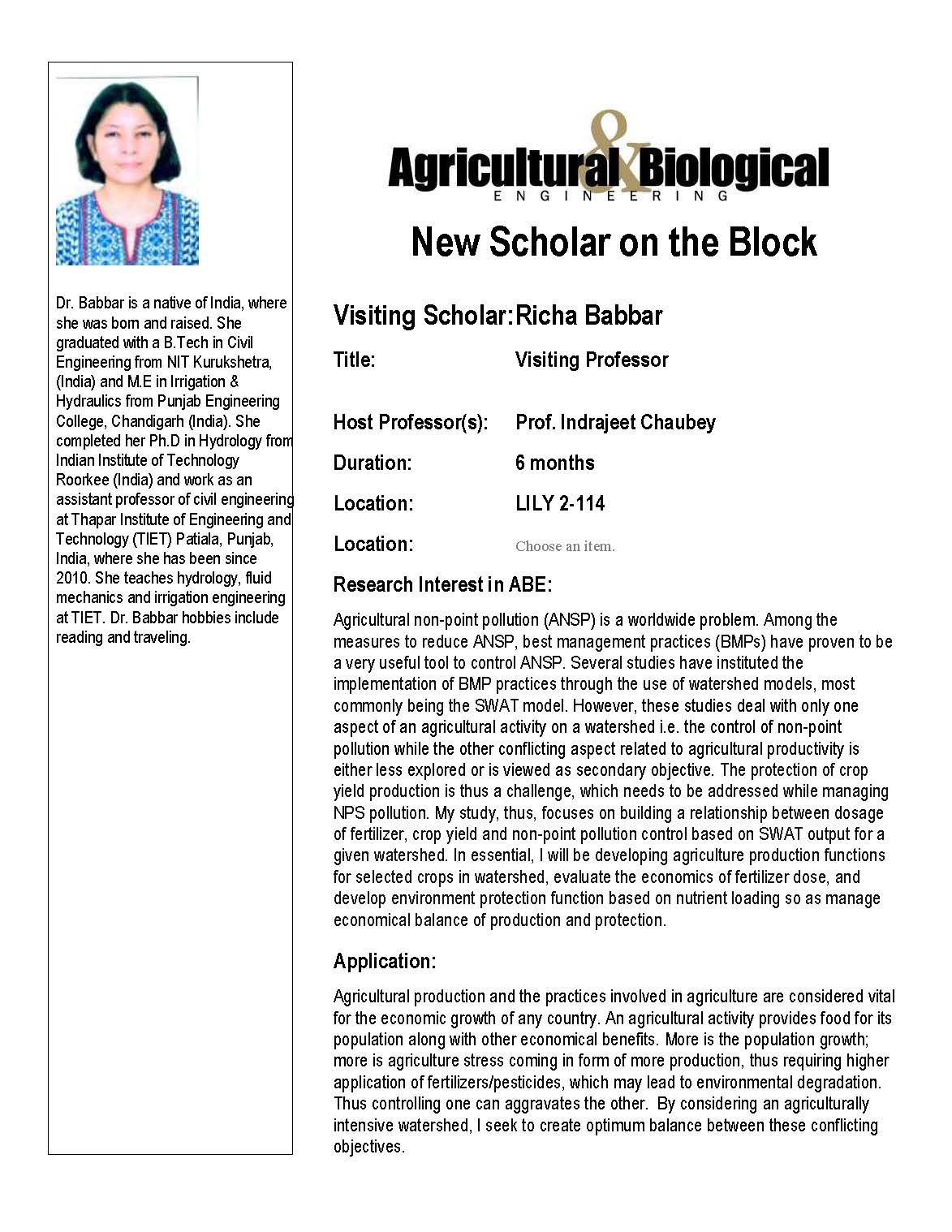 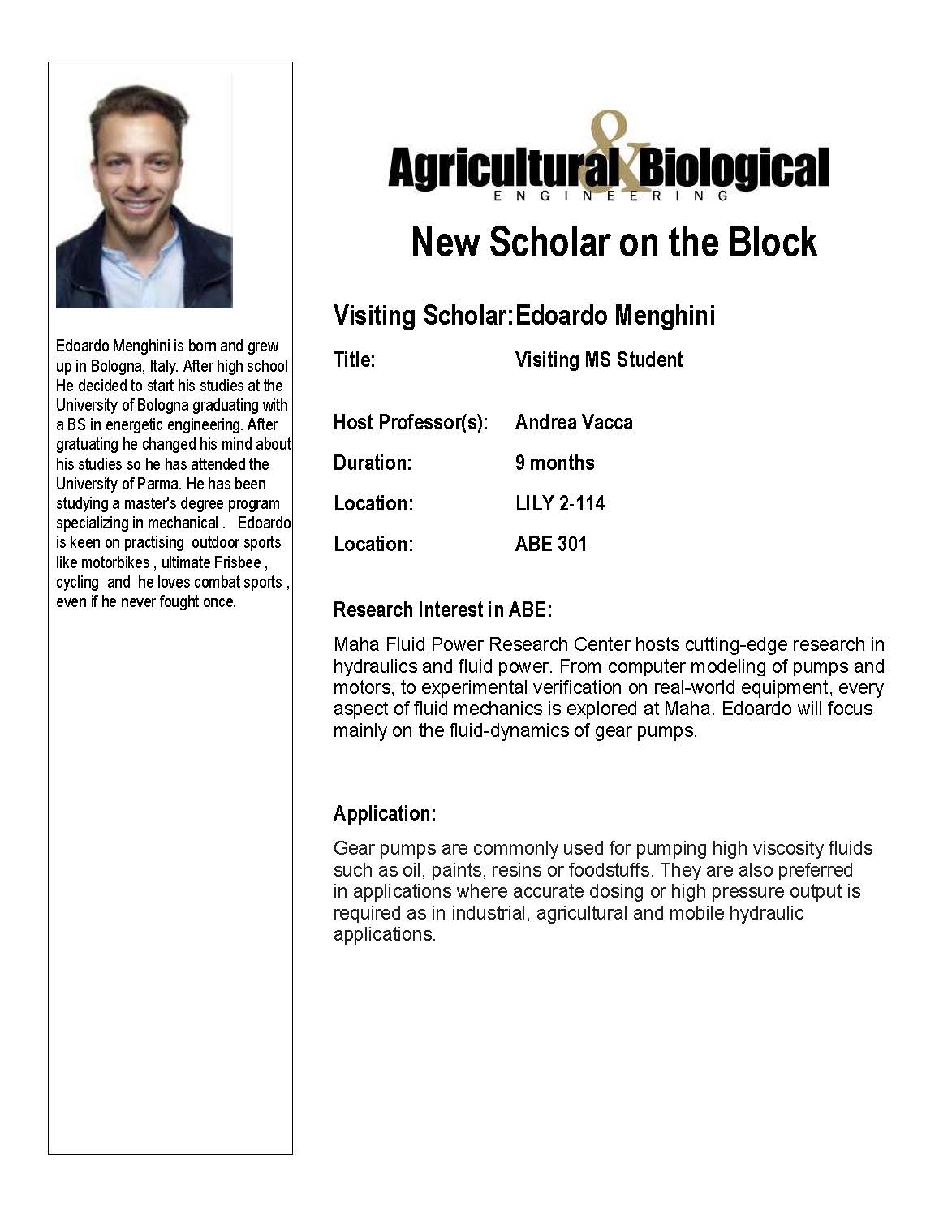 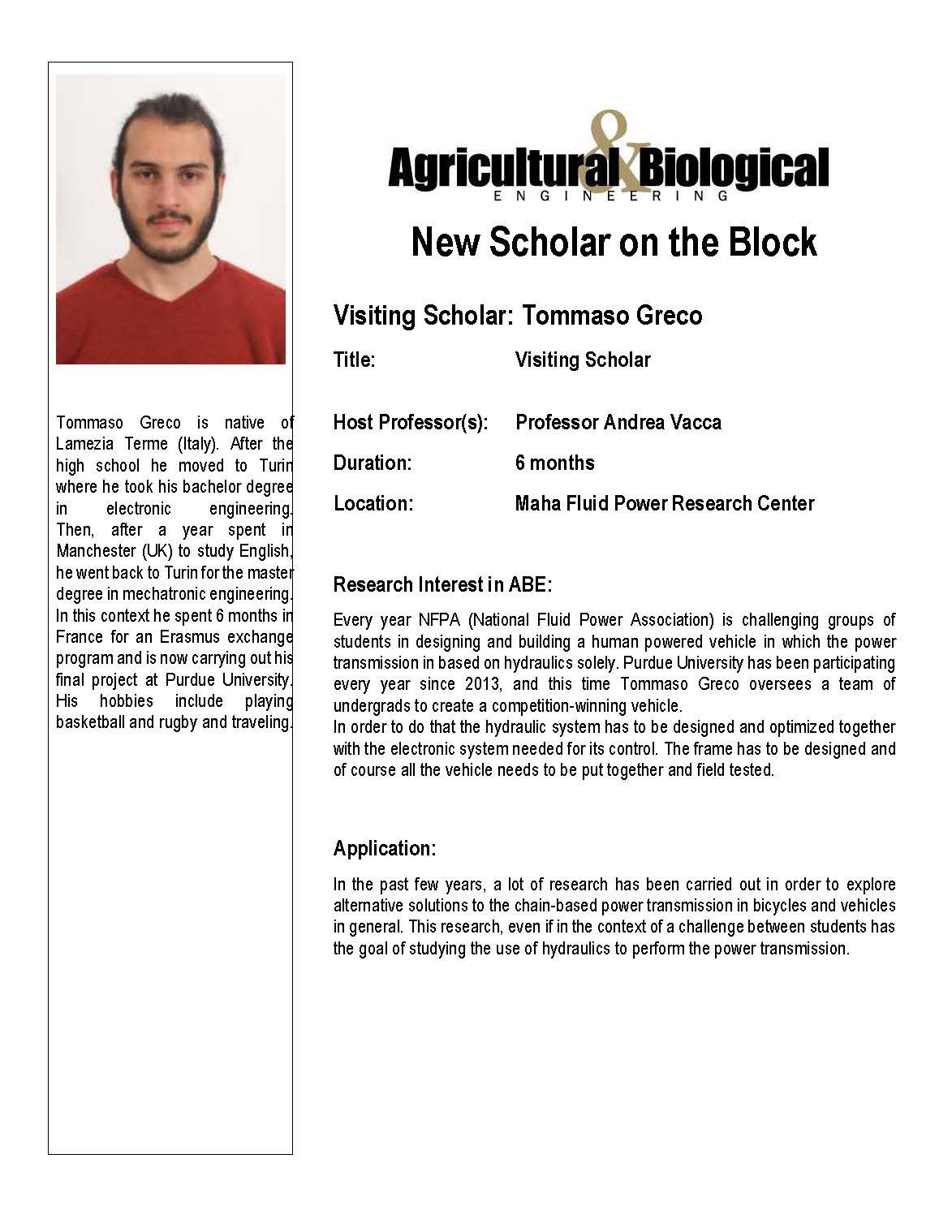 Congratulations to the Purdue International Genetically Engineered Machines (iGEM) Team which received a Bronze Medal at the annual Jamboree in Boston in October. The competition attracts more than 300 teams from across the world to develop engineering solutions for real-world problems with biology. This year, the team developed a rapid cost-effective paper-based assay for yeast infections to be used in low infrastructure environments. The team was advised by Drs. Solomon and Verma, with support from graduate instructors and BE graduate students Kok Zhi Lee, Ethan Hillman, and Casey Hooker. Team members included BE students Zach Berglund (’20), Janice Chen (’20), and Kevin Fitzgerald (’20).