A group of students watched eagerly as a small quadcopter attempted to navigate itself to the exit of a maze. Looking down into the knee-height labyrinth made of oversized Lego-style bricks, students at the Purdue UAS Research and Test Facility (PURT) cheered for the autonomous drone as it went through openings successfully. Laughter and words of encouragement came as the drone recovered after buzzing its propellers against the maze walls. 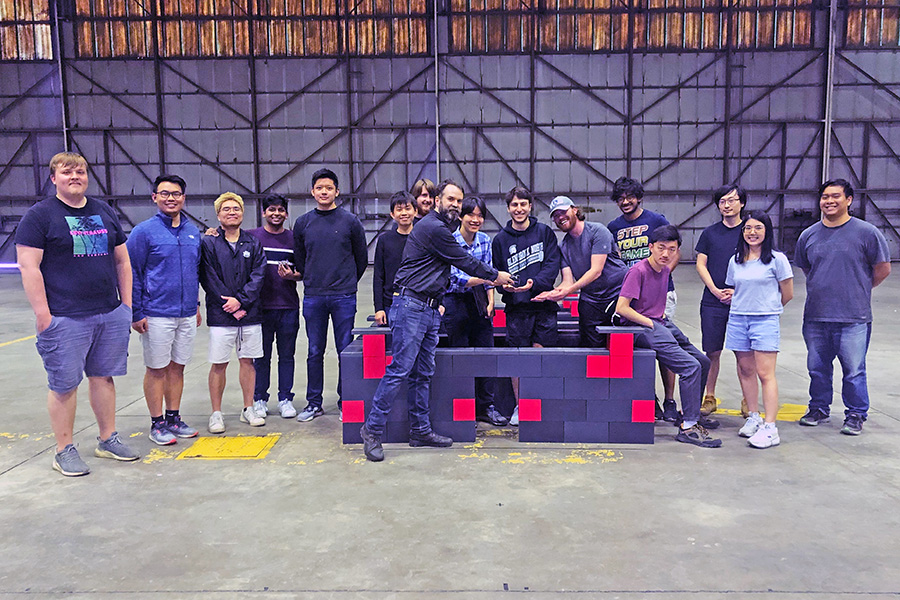 A group of students watched eagerly as a small quadcopter attempted to navigate itself to the exit of a maze. Looking down into the knee-height labyrinth made of oversized Lego-style bricks, students at the Purdue UAS Research and Test Facility (PURT) cheered for the autonomous drone as it went through openings successfully. They laughed as the drone buzzed its propellers against the maze walls, and gave it words of encouragement as it recovered its position.

The team with the most success was Nik Futernik, David Gusis, and Hans Suganda, all undergraduates from the School of Aeronautics and Astronautics. Given just two days to learn about and program these drones, Suganda said it was a challenge to write code sophisticated enough for drones to just complete the maze. No team succeeded in getting to the end, but Suganda, Gusis and Futernik's drone got the furthest.

“The competition was an invaluable learning experience for me,” Suganda says. “Sure, it was nice to win, and I certainly did try to ‘win,’ but I never really cared about whether we actually won or not. I just wanted to be part of a small, short duration project and I also wanted to see what other teams did.” 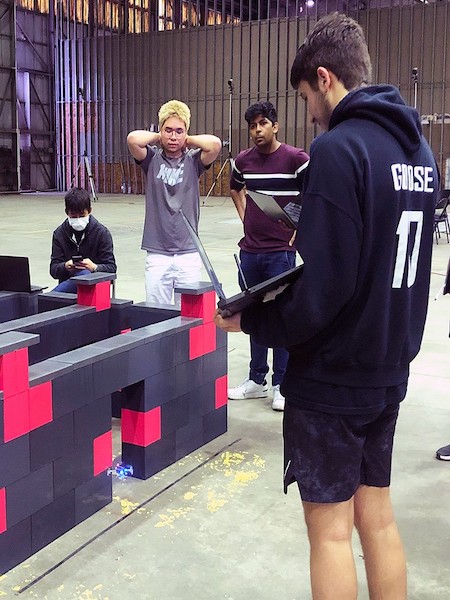 Students monitor laptops and watch as one of their drones enter the test maze, the final test of the Drone Crash Course. Photo by Li-Yu Lin.

The maze-traversing competition is the capstone on the two-day Drone Crash Course, hosted at Purdue as part of the NASA Secure and Safe Assured Autonomy University Leadership Initiative.

In the course, students learn the basics of path planning, obstacle avoidance, and python programming to control a Crazyflie drone. These drones are lightweight, palm-sized, fully programmable quadcopters. Students must write their own code that the drone will use to guide itself away from walls and through doorways.

Suganda attributes their success to teamwork. "Our group worked in semi-parallel, with each member testing their small scripts independently. This allowed our code to be prototyped faster."

Another workshop like this will also be held at North Carolina Agriculture and Technical State University. These courses are meant to introduce students to the principles and challenges around urban air mobility. Students are provided the necessary hardware, and the winning team at the end of each workshop receives a drone kit to take home. The PURT facility is also hosted the 2022 IEEE Autonomous Unmanned Aerial Vehicles (UAV) Competition.

Suganda found the course valuable well beyond the prize.

"Prior to the course, I had never interfaced my laptop to an embedded device before," Suganda says. "Interfacing to the drone was already a massive milestone for me because now I know how to program embedded devices better. I can feel that this is the precursor to an extremely rich and powerful engineering application."