Abstract: The usage of Direct Metal Deposition (DMD) technology for repairing defective voids in high-value metallic components is time consuming, since traditional geometric reconstruction methods are not seamlessly connected to the DMD process. Here, we consider the development of a semi-automated geometric algorithm for Ã¢â‚¬Å“virtuallyÃ¢â‚¬Â repairing defective voids that appear on gas turbine airfoils after extensive use. Our method produces an accurately reconstructed geometric model that can be used for generating DMD scanning paths, while ensuring both dimensional accuracy and topological consistency required by the airfoil design. This model is constructed by using the Sectional Gauss Map concept to generate a series of Prominent Cross Sections (PCS) along the longitudinal axis of a digitally acquired defective airfoil. The intrinsic geometry of the PCS lying in the non-defective region is then extrapolated across the defective region to fill in the voids. A boolean difference between the original defective model and the final reconstructed model yields a fully parameterized geometric representation of the repair volume. The test results of this method demonstrate the algorithmÃ¢â‚¬â„¢s robustness and versatility over a wide range of airfoil defects. 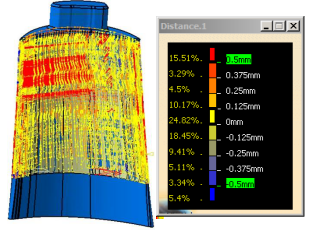