Even with the heat index rising above 100 degrees on a June day, as he walks from his new home at Grissom Hall to one of the most iconic spots on Purdue University’s campus, the engineering fountain, for a photo shoot, Son is curious and talkative.

He asks where the John Purdue statue is located, wonders about student traditions and tries to envision what campus looks like during a busy semester. During his onsite interview for the James J. Solberg Head of the School of Industrial Engineering in September, he didn’t have much time to explore the campus. Subsequent visits in November and March came during campus breaks. Now, only weeks into his new role, the campus once again is largely quiet.

Son hardly can wait until that’s no longer the case. 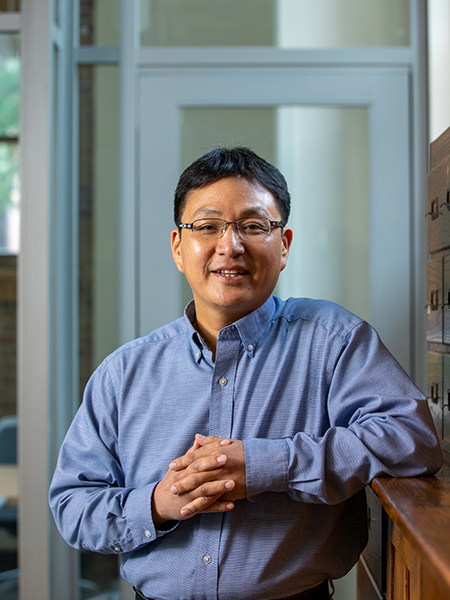 He’s busying himself now with as many meetings as he can with faculty, students, staff and alumni — the advisory council already has met — and they’re not strictly fact-gathering conversations.

At the heart of what Son wants to accomplish in Purdue IE is fostering the right feel. He wants a “welcoming environment” in which faculty and staff feel supported, students have the optimum setting to learn, grow and excel and alumni are eager to return to share knowledge with students, partner with Son and his faculty on research and broaden the capabilities of what IE can be and do.

It will be an effort to emphasize excellence and environment, evolving how Purdue IE is viewed not just by its current students but beyond, by prospective undergraduate and graduate students, academic peers and industry. But Son is eager to address any challenges and opportunities that lie ahead.

“As a leading school, Purdue IE means a lot to the IE profession. So I liked the opportunity to lead and advance the IE profession working with all the people in Purdue IE,” Son said of the reason for accepting the position in November 2021. “Purdue’s reputation is just so high. Purdue IE, in particular. So I feel the big responsibilities as well as the huge opportunities, so that’s why I’m excited and I’ll work with our team to define our IE in the future, as well as advance our already-strong school to be even stronger.

“Internally, I want our faculty, staff and students to feel that they’re valuable members of the Purdue IE community. Also, I want our alumni to feel that they are always welcome to visit us and engage. Externally, I want other IE schools to look up to Purdue IE for innovations in student learning, research direction or community engagement. Also, I want many industry and universities to be eager to hire our graduates. That will define the success.”

Son, who started his five-year term on June 1, had known about Purdue IE’s reputation for some time.

When he was pursuing his doctoral degree at Penn State University, four of his five PhD committee members, including his advisor, were Purdue alumni. Several leaders in his major research areas (intelligent manufacturing systems and modeling and simulation) are either Purdue graduates or faculty members. As a faculty member at the University of Arizona since 2000 in the Department of Systems and Industrial Engineering, he’d seen Purdue IE’s U.S. News & World Report rankings hit No. 1 in online, No. 2 in undergraduate and No. 7 in graduate in the country.

So when he was approached about becoming Purdue IE’s next head — replacing Abhi Deshmukh, who served as head for a decade — Son didn’t hesitate.

He was honored to step into a role of a school that already had a bevy of strengths, including nearly 800 undergraduate students and a significant impact on larger scale systems in manufacturing, sustainability, health care, space and humanitarian logistics.

The current IE curriculum is centered on four research areas: Cognition and decision making, next generation products and services, computational IE, and complex systems and networks. Son intends to “balance the breadth and identity of the school’s research strength as we grow the School with more than 10 new faculty positions the next few years.”

He’ll be targeting two areas in his first year. One is operations research intersecting with simulation, machine learning and data science — so more on the methodology side. The second is interdependent complex systems, including critical infrastructure, cyber-physical systems, innovation ecosystems, healthcare systems, and semi-conductor supply chain.

Publications: Authored/co-authored over 110 journal papers and over 100 conference papers

“The current classifications that IE School is quite aligned with my vision. As I mentioned, one emphasis that I will make is to balance,” Son said. “IE is needed by any large system of importance to modern society, so working on high impact complex systems is great and important. While we do that, we also want to balance the breadth and focused excellence. Also it is aligned with the strategic emphasis of the College and the University as well.”

Son certainly will be tasked with further advancing the Purdue IE’s impact, recognition, national and international standing through a strong commitment to excel in discovery, learning and engagement.

And he has a “strong, proven track record” of doing so, John A. Edwardson Dean of the College of Engineering Mung Chiang said.

During Son’s headship at Arizona, which started in 2014, the department grew from about 200 undergraduate students and about 100 graduate students to nearly 400 undergrad and 200 grads in 2021. Son targeted faculty and staff growth as well, and both also increased: The faculty from nine tenured/tenure-track in 2014 to 16 in 2021, and the staff up 50 percent in seven years.

Arizona’s SIE department reached its highest ranking by USNWR (No. 21) in the last 10 years during his tenure as head.

The distance learning program also markedly increased under Son’s leadership with 105 students in the online MS programs in 2021 vs. only 23 in 2014.

Son stressed diversity during his Arizona tenure in a variety of ways, and one output was hiring four women to join the faculty. In 2014, there were no female faculty members. The female student population also increased to 35 percent in 2021, compared to 23 percent in 2016.

“Diversity is something that I had emphasized its importance a lot at the University of Arizona and will do so at Purdue. I will emphasize the importance of diversity in all school functions, such as faculty and staff hiring, student recruiting, committee formation, award nominations, leadership positions and more,” he said. “So all the departmental functions, I will emphasize the importance of diversity and also I will continuously remind to myself, faculty, staff and the team. So this should become our normal way of functioning.”

Son quickly learned being a head is an all-encompassing job. But he knew early on in his academic career that his path was moving toward leadership. His goal always was to become a professor at a R1 institution, and the decision to go into academia instead of industry from Penn State was perfect because it allowed him to work with students daily and conduct research.

Those areas satisfied his innate curiosity to do new things, impactful things, and gave him the flexibility to do different research work each year while interacting with students. But when the opportunity came to pursue the headship at Arizona, he was intrigued because “leadership is something that I was always interested in.”

He understands now that as a head, leadership responsibilities take a substantial portion of his time. In Purdue IE, he largely will work to support the faculty, forming teams, introducing them to other peers and leaders across the campus and industry. He’s eager to reach out to other units on campus to create a collaborative environment. A point of emphasis, too, will be networking and building relationships with industry, looking for partners.

“I think we get more of those opportunities, and that will be great,” he said.

He’s committed to maximizing the learning experience for students, giving them resources to maintain an innovative, progressive atmosphere. Some of that could be with him, as Son would like to continue to do research himself. His research specializes in modeling and control of complex manufacturing and service enterprises and distributed federation of multi-paradigm simulations.

But he knows “leadership will take a lot of my time.”

That’s just fine for someone who listed “good listener,” “pleasant” and “fair” among the traits he brings that will benefit the School.