How you stock your shelves and fill the fridge may matter more for the environment than going vegan, this report says. 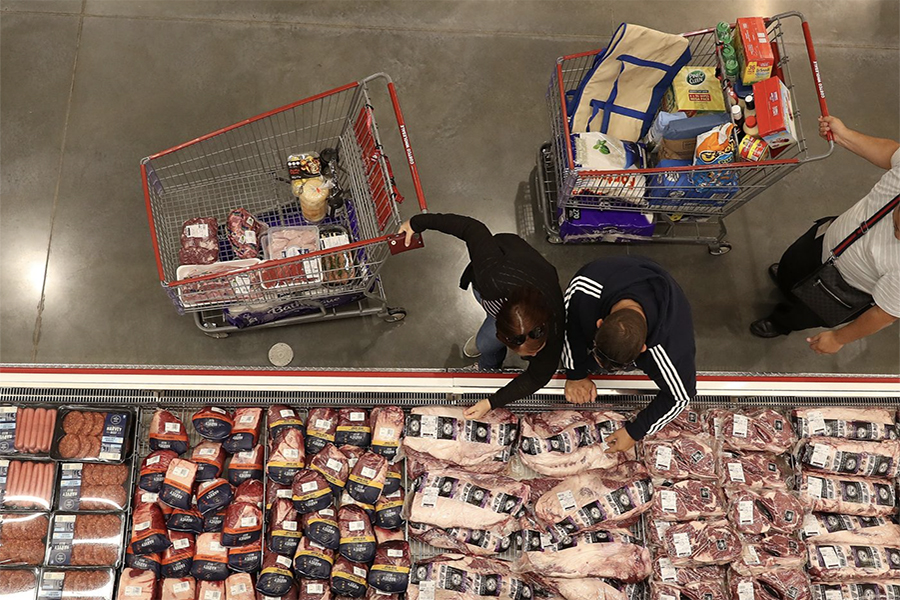 Purdue researchers say small households should buy less food in bulk quantities, which is often more than will be eaten, and manufacturers should offer cost-effective package sizes, as a way to cut down on the size of our carbon footprints. GETTY IMAGES

It’s not the crab legs from Costco that might kill Earth, but the rest of that warehouse buying binge that could use a rethink.

Getting food — especially meat and dairy — from farm to plate contributes a lot to global greenhouse gas emissions. Food production globally accounts for one-quarter of those emissions and takes up half of the planet’s habitable surface, says Carbon Brief.

So that prompts some scientists to suggest that a vegetarian diet, or an even stricter vegan diet, is the best way shrink an individual’s carbon footprint — nutritional pros and cons aside.

But a report out Wednesday suggests that our grocery shopping habits also play an important role. The bigger culprit behind food-linked carbon emissions lies with the allure of bulk shopping for alleged savings and convenience, and other habits that lead to food waste, rather than what we’re putting in our mouths. Although, notably, one of the findings suggests wasteful empty calories expand both waistbands and carbon footprints.

Because animals are generally inefficient at converting the plants they eat into energy, meat and dairy products especially result in higher emissions than fruit, vegetables and grains. It’s understandable, then, that much of the climate change research around food focuses on dietary choices.

However, most of these recommendations have been based on an “average American diet.” In reality, not everyone eats the same types or quantities of foods. So to account for this diversity, Hua Cai, an associate professor of environmental and ecological engineering and industrial engineering, and her colleagues at Purdue University, wanted to assess the actual groceries purchased by U.S. households and identify the hotspots of carbon emissions in these purchases.

The researchers analyzed detailed grocery purchase records of over 57,000 U.S. households in 2010, and added up the greenhouse gas emissions for growing and harvesting the food items. Data for packaging and transportation were not included. Then, they compared the emissions calculation to that which would be generated from buying foods for a benchmark healthy and sustainable diet.

The team’s analysis revealed that 71% of homes surveyed could decrease their food carbon footprint, and they identified three main ways for consumers to do so, without necessarily eliminating whole categories of food, like say meat, fish or dairy.

The peer-reviewed study was promoted by the nonprofit American Chemical Society, whose members have a role in food preservatives. Funding also came from the Purdue University Environmental and Ecological Engineering program.

Large and small gestures to slow global warming are in heightened focus this month as the world’s economic powers, developing-nation leaders and the protesters keeping them all accountable gather in Glasgow for what some have called the most ambitious effort to hold global temperatures to no more than 1.5 degrees Celsius in years.

Heat-trapping greenhouse gases in the atmosphere reached another record last year ,and that trend has continued in a storm-heavy and drought-prone 2021, according to the United Nations’ World Meteorological Organization (WMO) Greenhouse Gas Bulletin.

This article first appeared in Market Watch on November 3, 2021

Promoting sustainable food consumption is critical to meet the United Nation’s Sustainable Development Goals. The existing research using average diets and the individual one-day diet recall data to obtain insights into food carbon footprints (CFs) may neglect the diverse food purchasing patterns in different households (HHs). In this paper, we analyzed detailed grocery shopping records of 57,578 U.S. HHs to evaluate the associated food CFs. The cradle-to-farm-gate CFs of 83 food items were calculated using a process-based life cycle assessment model adapted to the U.S. condition. Using the CF of a healthy and sustainable diet as the benchmark, we quantified the CF reduction potentials for each HH. Our results suggest three key strategies to reduce HH food CFs: (1) lowering the over-purchasing in small (one- or two-person) HHs can achieve two-thirds of the recognized carbon emission reduction potentials; (2) reducing the intake of snacks, ready-made food, and drinks leads to as much as, if not more, carbon emission reduction than changing diets; and (3) more attention needs to be paid to reduce the carbon intensity of food items with large purchased volume.