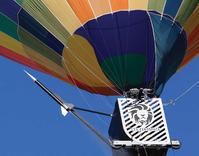 Leo Aerospace is aiming for space but needs venture capital to get there.

The team, which includes aerospace and industrial engineers, did not start out with that vision. Instead, while in Purdue's entrepreneurship program, aided by $52,500 in National Science Foundation grants, they researched different markets, and uncovered an emerging industry with a problem.

The space industry was set up to use large rockets to put large satellites into orbit, Rudy explained. Microsatellite owners must scramble to find extra room on those rockets. This delays flight schedules and forces compromises in optimal orbits. Leo designed its rocket-and-balloon solution to launch small payloads into orbit on the cheap.

To launch itself, Leo raised about $30,000 (and engineering software licenses) by winning startup competitions at Purdue and West Coast venues.

To find more money—and mentoring—they started investigating accelerator programs. Most U.S. accelerators focused primarily on software. But Australia's Startmate focused on hardware, and one of its VC partners focused on aerospace.

Australia also had another advantage. "Our business plan is reinforced by the ability to launch frequently, and that is very difficult to do with the air traffic in the United States," Rudy said. "Australia provides a unique opportunity to launch more frequently and with less policy and regulatory pressure."

At Startmate, the engineers designed and 3D-printed components for its system over several three-month campaigns. VC partners provided Leo with $50,000, and helped them practice and refine their pitch to raise capital.

Those partners also taught Leo's founders a critical lesson: Get payment commitments from the 170 potential customers they had interviewed while researching potential markets for their company. Those letters of intent gave Leo credibility with potential investors.

To raise larger sums, potential investors needed to see a prototype that lowered their perceived risk. To build it, Leo needed to hire experienced engineers who could manage a development cycle.

To raise it, the recent graduates launched a fundraising campaign on Netcapital, a crowdfunding platform. This raised $220,000, primarily from friends, family, and some angel investors.

"We chose to go with equity-based crowd funding because we needed a decent amount of money to conduct hardware testing," Rudy said. "We also wanted to be able to control how much of the company we were giving away [to the investors]."

The campaign provided the funds to successfully launch a rocket in December 2018 from a reusable balloon platform in the Mojave Desert. Leo was the first company the Federal Aviation Administration ever authorized for such a launch, Rudy said.

The company recently raised another $90,000 from internal venture capital sources at Plug and Play, a Silicon Valley accelerator. Now that they have demonstrated the system and lined up potential customers, the co-founders are working with outside advisors to raise $8 million in seed financing.