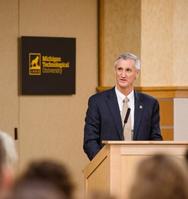 "It is an honor and privilege to be chosen as the University's tenth president," Koubek said, "and I'm excited to start working with the Michigan Tech community."
(Photo/Michigan Tech University)

"This is a unique moment in time," says President Koubek. "We are truly in the fourth industrial revolution. In the Renaissance, we celebrated the individual. But when we moved into the Industrial Revolution, we lost that sense of individuality a little bit. We focused on automation. And with the emergence of information technology, humans were encouraged to interact with and think like computers.

"But that's all in the past now. The value of the individual is no longer eclipsed by technology. Today, the Renaissance meets the Industrial Revolution. Technology is sophisticated, but it's here to help us," he says.

Koubek (Purdue MSIE 1985, PhD 1987) joined Michigan Tech after serving for three years as executive vice president and provost of Louisiana State University. Koubek joined LSU in 2009 as the dean of LSU's College of Engineering. During his six-year tenure as dean, Koubek expanded the college's undergraduate enrollment by 53 percent, elevating it to the 17th largest college of engineering in the United States. Doctoral degrees awarded nearly doubled. He pioneered an innovative public/private partnership with Louisiana Economic Development and IBM to contemporize the curriculum in the Department of Computer Science. He also secured more that $90 million dollars in philanthropic funding, with a majority of the dollars raised going to support the renovation of Patrick F. Taylor Hall (LSU's main engineering building) and the construction of a new chemical engineering facility.

In 2015, he was appointed executive vice president and provost. As provost, Koubek guided the campus through an extensive strategic planning process and launched the LSU Strategic Plan 2025. As a result, the university completely realigned its existing general education course structure in an effort to better prepare students to become effective and versatile problem solvers, global citizens, and leaders. He is also credited with completing the fundraising campaigns for the William A. Brookshire Military and Veterans Student Center, Memorial Tower, and Pleasant Hall. In 2017, LSU experienced its highest research expenditures in university history under his leadership.

Prior to joining LSU, Koubek served as head of Pennsylvania State University's Harold and Inge Marcus Department of Industrial and Manufacturing Engineering, which ranked as one of the nation's best industrial engineering programs during his tenure; associate dean for research and graduate studies in Wright State University's College of Engineering and Computer Science; and chair for Wright State's Department of Biomedical, Industrial and Human Factors Engineering, where he was recognized as Department Chair of the Year in 2001.

Koubek recently completed service on the Tsinghua University's Department of Industrial Engineering's International Advisory Board. He also served on the board of Our Lady of the Lake Hospital in Baton Rouge. He has authored and co-authored numerous technical engineering articles, book chapters, and books, and has given invited presentations around the world, including Tokyo, Beijing and the United Kingdom.

Koubek began his academic career as a faculty member in Wright State University's College of Engineering and Computer Science. He later served six years as a tenured assistant and associate professor in the School of Industrial Engineering at Purdue University. Koubek holds bachelor's degrees in biblical literature, with a minor in chemistry, from Oral Roberts University, and in psychology from Northeastern Illinois University. He received his master's degree and PhD in industrial engineering from Purdue University.

Koubek and his wife Valerie have three grown children and two German Shepherds.