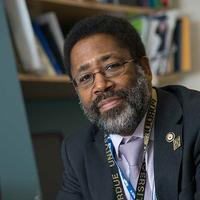 Naoki Ito, Consul-General of Japan in Chicago, gave opening remarks at the forum. (Photo/Samantha Horton/IPB News)
An IE professor organized and participated in the Workforce and Innovation Development Event (WIDE), which highlighted the impact of public-private partnerships between Indiana and Japanese industries on economic development and workforce enhancement in the state.

Barrett Caldwell, professor of industrial engineering, organized the May 2 forum at the request of the Consulate of Japan in Chicago and emceed the event. Caldwell is a Jefferson Science Fellow alumnus who worked with the Office of Japanese Affairs, part of the U.S. Department of State's Bureau of East Asian and Pacific Affairs, in 2016-17.

"I was very surprised and pleased how Indiana was able to be an exemplar for partnerships in industry investment, educational opportunities and quality of community and economic life," said Caldwell. "In contrast to more negative stories about automation in the workplace, I was excited to report on the strong employment environment for workers at the two-year and four-year level for STEM-related skills in advanced manufacturing and production industries."

The forum included two panel discussions on workforce development and innovation development, and a networking reception. Leaders in local, state, national and international government, as well as private industries, spoke during the event, which was sponsored by Purdue and the Consulate-General of Japan in Chicago, in partnership with the Japan-America Society of Indiana. Purdue University President Mitch Daniels gave the opening remarks. The panel discussions included Caldwell; Julie Chung, Director of the U.S. Office of Japanese Affairs; Jim Schellinger, Indiana Secretary of Commerce; Elaine Bedel, President of the Indiana Economic Development Corporation (IEDC); Geanie Umberger, Associate Dean for Engagement for the Purdue Polytechnic Institute; and Dan Hirleman, Executive Vice President for Purdue Research & Partnerships. Over 70 people attended the event in the Purdue Memorial Union.

According to the IEDC, Japan is the largest international economic investor in Indiana, with more than 280 Japanese companies in the state that support over 58,000 jobs. The Purdue event highlighted how local- and state-level cooperation can spur innovation supported by a highly skilled workforce.

On May 7, Caldwell also participated in the Japan-Texas Economic Summit.