At the San Sebastian Aquarium 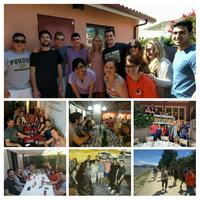 Systems Dynamics & Modeling for Engineers (IE 49000) took place in and around Pamplona, Navarra, Spain, May 9-31. This was the first time this particular Maymester course has been offered. Purdue IE's Asst. Prof. Joaquín Goñi, who is from Pamplona, gave a unique cultural perspective to the course and outings.

Goñi developed the course for students to learn about systems, study Spanish, and take technical and cultural visits to broaden their understanding of IE and another culture. He also wanted to keep the course relatively small so that he could interact well with the students.

A typical day during the three-week course started in the mornings with Spanish class at the Pamplona Learning Spanish Institute, S.L., and afternoons studying systems dynamics and modeling. Students also went on eight cultural and five technical visits.

The first week, the group made a technical visit to the mTorres facility to learn about the automatization of industrial processes from one of the top engineering firms in the world.That weekend, they visited the small mountain towns of Ochagavia and Eneriz, and hiked part of the Camino de Santiago, a famous trail that crosses into Navarra from France.

"We hiked to this really picturesque valley [Ochagavia], visited an old church built on a mountainside, and then ate lunch at a traditional sidreria, or cider brewery," described Allum. "This is a very traditional meal that involves several courses and a large steak."

During the second week, they visited the Pamplona City Council, the seat of the Navarra regional government. They also took a day trip to San Sebastian, where they toured the research facilities of the Basque Center of Brain and Language (BCBL). Prof. Goñi gave a talk at BCBL on "Component-based analyses in the connectome domain: decomposing and refining individual connectomes from a group-level perspective". BCBL was of particular interest to Goñi, Amico and Tipnis, as Goñi's CONNplexity Lab research focuses on the application of complex systems approaches in neuroscience and cognitive science, including frameworks such as graph theory, information theory or fractal theory, and relating structural and functional connectivity within the human brain. The group also visited the San Sebastian Aquarium.

The group left Pamplona the second weekend to visit Barcelona, capital of the region of Catalonia, about four hours from Pamplona by train. There they visited many cultural and historic sites, including museums, saw modernist landmarks by Antoni Gaudí and modern art by Pablo Picasso and Joan Miró, and attended a special "Talking Brains Exhibit" at CosmoCaixa Barcelona.

They also listened to a talk by Eli Lilly's Nieves Velez de Mendizabal, PhD (and Prof. Goñi's wife) on "Principles of Pharmacokinetics and Pharmacodynamics: A System Dynamics Perspective".

On the last Monday, journalist Belen Galindo interviewed the group for the local newspaper Diario de Navarra. Her article "Biznietos de Hemingway" ("Great-grandchildren of Hemingway") in her blog, sopadeletras ("Alphabet Soup") describes the students’ experiences of learning systems in a different culture and their impressions of Pamplona, Navarra, and Spain compared to the United States.

Other highlights of the last week included student presentations, a cooking class with the Pamplona Learning Spanish Institute's chef, a visit to the nearby Marques de Riscal Vineyard, and a visit to the Plaza de Toros, where they learned about the famous Running of the Bulls event held every July in Pamplona. The course concluded with a study abroad "graduation" and celebratory lunch on May 31.

Reflecting on the three-week course, Goñi was enthusiastic. "We have exceeded [my expectations]!" he said. "It was even better than I expected." The course will be offered again next May.

Pamplona is the capital of Navarra, an autonomous Spanish state which borders the western Pyrenees Mountains.