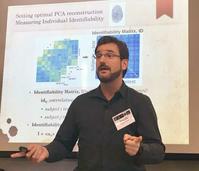 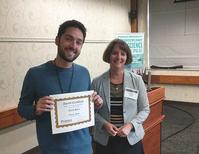 The two-day event was organized by IE Assistant Professor Joaquín Goñi and Postdoctoral Researcher Enrico Amico of the CONNplexity Lab. The event was held to give students hands-on experience in using complex networks concepts to assess brain connectivity. Graduate students, postdoctoral researchers, faculty and some undergraduates attended. The symposium took place the first day, and the hackathon was held on the second day.

The second day of the event was divided into a hackathon and a mini-pulse-programming course. A team formed by IUPUI PhD candidate Evgeny Chumin and IUPUI postdoctoral researcher and Purdue alumna Dr. Diana Svaldi won the Hackathon prize for their work on modularity changes in structural connectivity associated to alcohol habits.

This was the first time this event took place at Purdue University. In past years it has alternated between IU-Bloomington and IUPUI in Indianapolis.