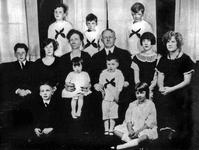 Frank and Lillian Gilbreth with 11 of their 12 children (from Purdue Libraries' Archives and Special Collections)
Lillian Moller Gilbreth, industrial psychologist and engineer, invented an efficient modern kitchen - but did not cook herself, according to a recent article in Slate.

Industrial engineering pioneer Gilbreth had 12 children, and with her husband and partner Frank B. Gilbreth invented what is known as motion study. This method pioneered the use of short films to watch how industrial processes and office tasks were done, breaking them down into component parts (which they called “therbligs,” Gilbreth backward) to make jobs faster and less taxing.

Two of her children, Frank B. Gilbreth Jr. and Ernestine Gilbreth Carey, write in Belles on Their Toes: "Mother planned, on paper, an efficiency-type kitchenette of the kind used today in a good many apartments. Under her arrangement, a person could mix a cake, put it in the oven, and do the dishes, without taking more than a couple of dozen steps."

Gilbreth used this method to invent a modern, efficient kitchen. She partnered with the Brooklyn Borough Gas Company to develop Gilbreth’s Kitchen Practical, unveiled in 1929 at a Women’s Exposition. The L-shaped arrangement she devised continues to be one of the most popular options for contemporary kitchens. The number of actual steps taken had been reduced from 281 to 45—less than one-sixth!

(excerpted from Alexandra Lange in Slate)

From Wikipedia: In 1935 Gilbreth became the first female engineering faculty member in the Purdue University College of Engineering. As one of the first working female engineers holding a PhD, she is considered to be the first true industrial/organizational psychologist. The books Cheaper by the Dozen and Belles on Their Toes (written by her children Ernestine and Frank Jr.) tell the story of the Gilbreths' family life with 12 children, and describe how they applied their interest in time and motion study to the organization and daily activities of such a large family.