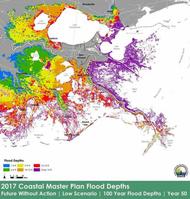 A recent article in the New Orleans Times-Picayune newspaper describes the $50 billion plan.

"The article shows our projections in a scenario with relatively low sea level rise and minimal changes in the average intensity of Gulf hurricanes," Johnson explains. "As hinted at by the maps of land loss under the 'Medium' and 'High' scenarios we’ve analyzed, 100-year floods could be significantly worse in the future than even the 10-15 feet depths that are shown."

The planners use the Coastal Louisiana Risk Assessment (CLARA) model, developed by Johnson and colleagues at RAND Corporation, to systematically evaluate flood risk from the many types of storm events that may occur now or in the future. It accounts for uncertainty in climate, environmental, and economic conditions. It also allows decision makers to see the risk impact of different combinations of flood protection projects, like levees and floodwall systems, and coastal restoration measures that alter the landscape, such as marsh creation projects and river diversions.

The Louisiana Legislature requires updates to the master plan every five years to address changes in the state's understanding of how quickly additional land loss and surge risk will occur.

"Louisiana is committed to using cutting-edge scientific findings to inform their coastal master planning efforts," says Johnson. "Their dedication to an objective decision-making process is commendable and has allowed the state to finally start moving past the decades of political gridlock that played a part in causing the disastrous consequences of hurricanes Katrina and Rita a decade ago."

Read more: The $50 billion plan to save Louisiana's coast gets a rewrite