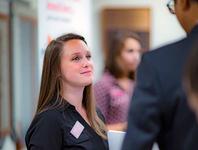 "The School of Industrial Engineering at Purdue has never hosted a career fair at this scale and we  were all proud to house the event in our very own Grissom Hall,” said junior Pamela Yuan, the IISE Professional Development Director. “Having twelve companies in attendance and more than three hundred students participating, this career night was a smashing success, and I hope it will drive us closer to our goal of having 100% job placement rate for Purdue Industrial Engineering students!"

"This was the first time we were able to host a career fair of this magnitude, and the fact that it was held in the home of Purdue IE made the success of the event even sweeter," added master's student Mustafa Lokhandwala, IEGSO Chair of Academic Affairs. "I am glad that the students who attended the event were able to have meaningful discussions with employers from the 12 companies in attendance."