The Indiana Recycling Coalition (IRC) is advancing its year-long campaign to celebrate its 30th year as an Indiana nonprofit organization. As part of the campaign, the IRC is congratulating its 30 Recycling Rock Stars: individuals who have made a significant impact on the organization, its mission and the circular economy in the state of Indiana.

These Rock Stars have helped advocate for recycling, waste reduction, reuse, composting and sustainability. The IRC will recognize these individuals at a celebration event on June 10, 2020, during its annual conference. Each Recycling Rock Star’s story will be shared on the IRC’s website and social media using the hashtag #IRCturns30.

Individuals selected as one of the 30 Recycling Rock Stars were nominated by their community and selected by a volunteer committee. They hail from 11 counties and 13 cities across Indiana. Their impact includes work in education, philanthropy, innovation, advocacy, community impact and program implementation. Rock Star profiles will begin launching on indianarecycling.org in March.

The 30th Anniversary Celebration campaign, which launched at the 2019 IRC Annual Conference and Trade Show in June, also aims to raise $30,000 for the IRC. The final days of the campaign will be during the IRC’s Annual Conference and Trade Show, June 9th – 11th 2020 at the Marriott East. Funds raised from this campaign will support IRC’s expanding programs, including the new Master Recycler Program.

IRC Executive Director Allyson Mitchell states, “These Recycling Rock Stars are community leaders and sustainability advocates from all over Indiana. They come from diverse backgrounds and perspectives, yet are all working to improve sustainable materials management in various roles, organizations, and institutions. We look forward to sharing their stories and recognizing their efforts as we mark this milestone moment for the IRC.”

Congratulations to our 30 Recycling Rock Stars! 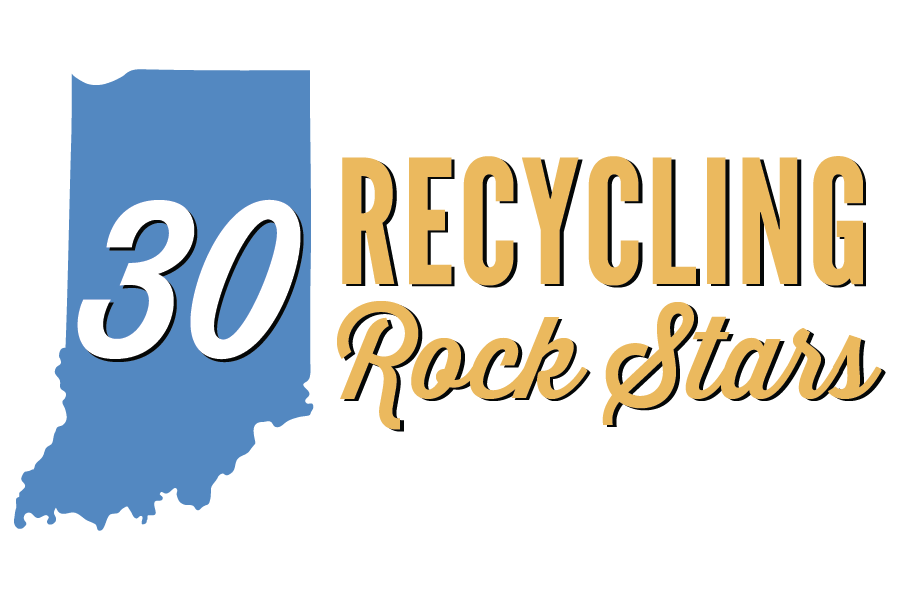 About the Indiana Recycling Coalition

The mission of the Indiana Recycling Coalition(IRC) is to strengthen the circular economy in Indiana through waste reduction, reuse, recycling and composting.

The IRC is a statewide not-for-profit, 501(c)(3) corporation representing concerned citizens, state and local government officials, business, industry and environmental groups since December of 1989. We focus on uniting Hoosiers in waste reduction, reuse, recycling and composting in order to preserve our communities for future generations. We educate and advocate to inspire individual Hoosiers, businesses, institutions, and state and local governments to think and act beyond recycling and towards a more circular economy in Indiana.

At the IRC, we educate Hoosiers about their role in sustainable materials management to empower them to make informed decisions in their daily lives. We convene our members and industry partners to connect them to each other and to the information, resources, and inspiration they need to solve problems and improve our economy and environment. And we advocate at the state and local levels to advance policies that create jobs, protect the value of our resources, and improve the quality of life in our communities.