Abstract: Product development is seeing a paradigm shift in the form of a simulation-driven approach. Recently, companies and designers have started to realize that simulation has the biggest impact when used as a concept verification tool in early stages of design. Early stage simulation tools like ANSYS Design Space and SIMULIA DesignSight Structure help to overcome the limitations in traditional product development processes where analyses are carried out by a separate group and not the designers. Most of these commercial tools still require well defined solid models as input and do not support freehand sketches, an integral part of the early design stage of product development. To this extent, we present APIX (acronym for Analysis from Pixelated Inputs), a tool for quick analysis of two dimensional mechanical sketches and parts from their static images using a pen-based interface. The input to the system can be offline (paper) sketches and diagrams, which include scanned legacy drawings and freehand sketches. In addition, images of two-dimensional projections of three dimensional mechanical parts can also be input. We have developed an approach to extract a set of boundary contours to represent a pixelated image using known image processing algorithms. The idea is to convert the input images to online sketches and use existing stroke-based recognition techniques for further processing. The converted sketch can now be edited, segmented, recognized, merged, solved for geometric constraints, beautified and used as input for finite element analysis. Finally, we demonstrate the effectiveness of our approach in the early design process with examples. 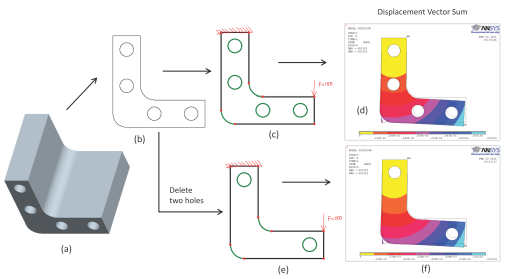