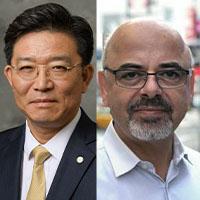 Purdue's School of Nuclear Engineering was invited to be an inaugural member of the Global Forum on Nuclear Education, Science, Technology and Policy's Advisory Group

This international initiative was formed by the Organization for Economic Co-operation and Development (OECD) Nuclear Energy Agency (NEA) as a platform for cooperation among leading academic institutions around the world involved in nuclear science and technology education, policy development and research.

The inaugural advisory council was comprised of 21 universities from 13 countries. The other U.S. institutions invited were MIT, Texas A&M, University of California Berkeley, and the University of Wisconsin.

The advisory group was composed of experts from the nuclear science and technology academic community with a demonstrated record of scientific excellence, while assuring geographical and gender balance, explained William D. Magwood IV, director-general of the OECD/NEA, in his invitation letter.

At the meeting, the council confirmed the four Working Areas that were developed during the exploratory meetings, which included participation from Kim and Tsoukalas on behalf of Purdue Nuclear Engineering.

Working Area 3: Rethinking the relationship between nuclear energy and society

Working Area 4: Future requirements for the competitiveness of nuclear energy

“Purdue is well positioned to make contributions in all areas,” Kim said.

After the meeting, NEA launched a tentative GF website under the NEA, which is to be updated with membership and other information soon.

Purdue Nuclear Engineering was invited to the first exploratory meeting in July 2019 and has been involved in subsequent meetings.

“This is great international recognition for our department and for the College of Engineering,” Kim said. “Purdue will be at the forefront in making global impact on nuclear energy and developing a workforce for future generations.”

He and Tsoukalas agree that Purdue is an ideal partner for NEA because of its legacy and reputation of using nuclear power to produce energy.

“Purdue has a history of contributions in nuclear power engineering. We had an impactful role in the development of nuclear reactors in the 1950s and 1960s, collaborating with national labs where the machines were designed,” Tsoukalas said. “Our school is one of the most well recognized in the history of developing nuclear reactors.”

But Purdue’s Nuclear Engineering program has never been satisfied to rest on its laurels. In 2019, Purdue’s PUR-1 became the only nuclear reactor in the United States licensed by the U.S. Nuclear Regulatory Commission for 100% digital I&C systems. “Purdue is leading the digital age of nuclear engineering at the university level,” Tsoukalas said.

He added that Purdue is excited to share its experience and lessons learned that will help facilitate and catalyze improvements in the nuclear arena.

“Once you digitalize a system, you don’t have to close the innovation space. It’s very important to keep improving the technology,” Tsoukalas said. “We have all kinds of things opening up to improve upon – big data, artificial intelligence, machine learning – and we can share our expertise.”

Members of the OECD advisory group will contribute to solutions to the challenges that affect the nuclear energy sector, engage with multi-governmental bodies within the NEA framework, and provide input to the ongoing NEA activities related to human capacity building, knowledge management, and innovation.

“This important initiative launched by the NEA is quite timely in that it comes when nuclear energy will play a key role in providing the global community with a solution for one of the most important issues at hand, climate change,” Kim said.

Kim and Tsoukalas do not discount the impact their students have had on Purdue’s OECD invitation.

Kim recounted Magwood’s last visit to Purdue when he gave a talk in the Atrium to a standing-room-only group of students. That level of interest speaks to the engagement found in the School of Nuclear Engineering and students’ genuine desire to learn.

“Purdue has its own personality, its own culture,” said Tsoukalas. “Our kids are excited about things they sense and understand to have the potential to make our world a better place. It’s very rewarding to see that a lot of young people now are excited to learn.”