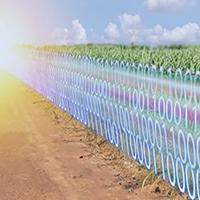 David Johnson recently wrote a blog post for the Purdue College of Engineering on the role of digital modeling in the future of agriculture. We've captured it here for review.

A larger and wealthier global population is combining with changing climate to put tremendous pressure on the global agricultural system, challenging our ability to feed the world sustainably without compromising other environmental outcomes. Global production of crops for food is expected to grow by anywhere from 70% to more than 100% over the next 30–40 years. At the same time, demand for fresh water could increase by half, and demand for bioenergy by over 1000% to address the goals of the Paris Agreement to reduce greenhouse gas emissions.

But policies regulating the environmental outcomes of agriculture typically focus on one particular aspect of sustainability to the exclusion of others. Often, these efforts are exclusively local, ignoring responses elsewhere in the world, and not considering negative consequences or weighing tradeoffs. After all, agricultural products are marketed globally — reductions in productivity imposed by regulation in one part of the world induce greater production elsewhere to compensate and ensure that supply meets demand.

For example, nitrogen and phosphorus from fertilizer that finds its way into the Mississippi River has created a massive “dead zone” in the Gulf of Mexico, with insufficient dissolved oxygen to support marine life. If you implement policies to effect a 45% decrease in nitrogen leaching in the Mississippi River Basin, a reduction the EPA has targeted to reduce the dead zone to a more palatable size, this could lead to substantial reductions in corn, soy and wheat yields in middle America, one of the world’s most important agricultural regions. While the Gulf of Mexico might be better off, this could incentivize greater deforestation in Brazil, clearing land to grow crops no longer produced in the United States. The global result could be a reduced capacity to remove carbon from the atmosphere, accelerating climate change.

We are tackling these massive, interlocking puzzles by building a digital, global, gridded model of agriculture and hydrology that accounts for markets and trade, as well as external forcings such as population and income growth and climate change. We are integrating a global hydrologic model and a model of crop biogeochemistry with an economic framework that can predict trade flows, demand growth, price changes and bioenergy demand. The trick is finding a balance (and enough data) to support calculations at a high enough resolution to be useful to planners, while still being computationally tractable with modern computing resources.

In the example of nitrogen management, our team has found that converting 1–2% of fields to wetlands in strategic locations would be considerably more effective at shrinking the Gulf dead zone than another policy choice, taxing fertilizer. Overall, we are evaluating a wide variety of locally/globally compatible policy solutions intended to reduce demand for irrigation, enhance crop yields, lower greenhouse gas emissions and reduce nitrogen leaching.

A great deal of scientific attention is currently focused on “grand challenges,” massively impactful problems that have the potential to reshape the world as we know it. Our effort — involving multiple universities, scientific disciplines, countries and governmental agencies — reflects the fact that these issues demand interdisciplinary collaboration, mindfulness about political feasibility, a “system of systems” approach, and an appreciation for the deep uncertainty about future conditions when evaluating the robustness of solutions.

Success is a future in which food becomes more affordable globally, despite growing stresses from population/income growth and climate change. As we face persistent environmental challenges, our goal is to feed a growing, warmer planet. Agriculture and associated land-use change is a major contributor to climate change, and food and water security have driven human conflict throughout history. Failure to act could lead to conflict and instability that topples governments and jeopardizes our ability to stave off disastrous levels of climate change.