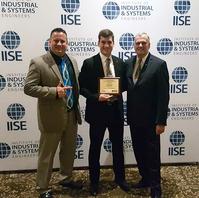 Orr received the James W. Barany Student Award for Excellence at the IISE Honors & Awards Banquet on May 22. He was one of only three students nationwide to receive it.

The Barany award "recognizes undergraduate students who, since the beginning of their junior year (last six quarters or four semesters), have distinguished themselves through excellence of scholarship and campus leadership. The aim is to single out those who have brought distinction to industrial engineering at their institution."

"Receiving the award was an honor and a great way to finish my undergraduate career with IISE," stated Orr, who was nominated by Purdue IE Managing Director and IISE student chapter advisor Steve Duket. Duket also received an Outstanding Faculty Advisor Recognition award.

James W. Barany (1930-2011) was a long-time faculty member of Purdue IE, particularly remembered for mentoring many IE students and for being the faculty advisor for the student chapter of the Institute of Industrial Engineers (IIE), now IISE.