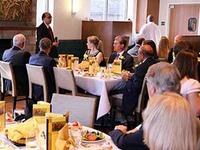 Associate Professor Seokcheon Lee received the James H. Greene Outstanding Graduate Educator Award. This award is named in honor of Dr. James H. Greene, Purdue IE faculty from 1948-1983. Greene was the driving force behind obtaining blanket approval of the IE PhD program in 1959 and was known for excellence in graduate education and student advising. This award was endowed in his honor by Dr. J. Franklin Sharp, one of his former students.

Professor Yuehwern Yih received the Pritsker Best Teacher Award, given annually to an outstanding teacher in Purdue IE and selected by its student body for excellence in teaching. This award was established with a gift from A. Alan and Anne G. Pritsker. A. Alan Pritsker was a professor in IE at Purdue from 1970 to 1998, was elected to the National Academy of Engineering in 1985, and received the Frank and Lillian Gilbreth Industrial Engineering Award in 1991. He was an exceptional instructor, and his approach embodied his “Teach what you do – do what you teach” philosophy. Recipients of this award are selected by the IE undergraduate student body under rules and procedures established by the IE faculty.

Graduate Program Administrator Cheryl Barnhart received the Staff Award, voted on by Purdue IE faculty, staff and student organization presidents. It recognizes those who continuously go above and beyond the expectations of his/her position, exhibit a consistent pattern of congenial behavior to all contacts and treat others with respect, and have a positive attitude even under the most difficult of circumstances.