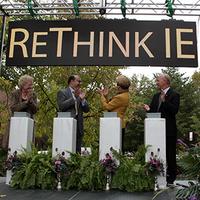 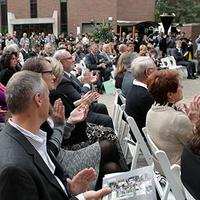 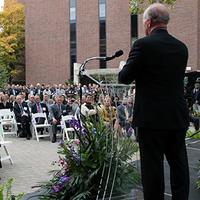 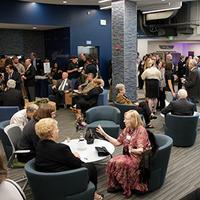 The sun came out for Industrial Engineering’s "A New Era at Grissom Hall" ceremony on an otherwise-cloudy October 9. IE alumni, faculty, staff and friends gathered at the new de Bedout Piazza behind Grissom Hall for the celebration event, along with local and state dignitaries.

Before the ceremony, IE alumni were invited to explore the reimagined Grissom and to discuss the School of Industrial Engineering's “ReThink IE” initiative. Following the ceremony, IE held an Open House and building tours.

The Grissom Hall project is part of Daniels' Purdue Moves effort, which includes expansion of Purdue Engineering as one of its major priorities. Grissom Hall's reinvention also is one phase of the College of Engineering Strategic Growth Initiative project, an effort to integrate increasing undergraduate and graduate enrollments, new faculty hires and encourage collaboration.

The repurposed space includes a striking visual focal point for the building and the school - the Peter Wang Student Excellence Center on the first floor. The majority of the changes add light and improve space usage, particularly with a "hot desking" style of desk sharing for graduate and undergraduate students. With this system, more students are able to use the available space and collaboration is facilitated.

The building is named for the late Virgil I. "Gus" Grissom, one of the original NASA Project Mercury astronauts and the second American to fly in space. He was killed with two other astronauts, including Purdue Engineering alumnus Roger Chaffee, during a pre-launch test for the Apollo 1 mission at the then-Cape Kennedy Air Force Station in Florida in 1967, and was posthumously awarded the Congressional Space Medal of Honor. A veteran of World War II and the Korean War, Grissom graduated from Purdue with a bachelor's degree in mechanical engineering in 1950.