How does an engineering school dedicated to the future celebrate its past? That's a question with many answers, and some of them are personified in the story of one engineer. David Schwind, a distinguished Purdue alumnus and pioneer in acoustics, will be coming back to the University he loves on September 20 to combine recollection and inspiration for a day of important anniversaries.

ENE itself is celebrating the 15th anniversary of its destiny to be a pioneer.

As an undergraduate, Schwind played a grass-roots role in the early days of IDE innovation; he delved into varied aspects of what was essentially a new field of expertise and, in 1974, he became Purdue’s first graduate in acoustical engineering.

“The world needs connectors,” and Schwind has served as a model for “crossing boundaries to emerge at the forefront of something new,” according to Dr. Mary Pilotte, who directs the undergraduate degree programs in the School of Engineering Education. That’s why the school, aiming to provide a “broad bandwidth” for learning in “more inclusive, socially connected and scholarly” ways, wants Schwind to be among those spotlighted during its 50th anniversary event, she says.

He will make presentations to students in acoustical engineering and related disciplines in the IDES/MDE homeroom in the Neil Armstrong Hall of Engineering. 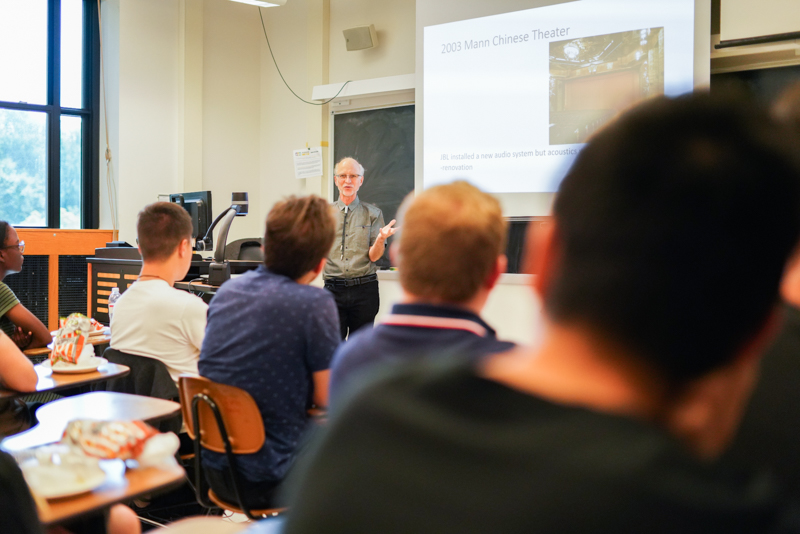 Purdue was the first university to establish a school of engineering education, and its “incubator” spirit of bold collaboration made it appropriate to integrate the proud IDE legacy into the mission. But the school embraces many other forward-looking endeavors. It is the home of the First-Year Engineering Program, offering a common curriculum every fall to some 2,400 aspiring engineers before they move on to pursue their majors. A Ph.D. program supports cutting-edge research on how to educate engineers in the future, covering “everything from pre-kindergarten to lifelong learning,” says Pilotte.

The undergraduate degree focus includes the school’s orchestration of IDES, providing engineering training to undergraduates as they prepare for non-engineer professions. In addition, a Multidisciplinary Engineering (MDE) program offers opportunities customized for students who want to practice engineering around a concentration that transcends traditional curricula.

“We’re always pushing the envelope,” helping to design individual plans of study that identify where the profession is newly engaged, Pilotte explains. This is a launching pad for “the next big engineering discipline,” and it has produced graduates for careers in nuclear, environmental and biomedical engineering. Collaborative administrators and faculty guide entrepreneurial students toward such target areas as nanotechnology and engineering management. Pilotte says she enjoys envisioning specializations poised to grow—perhaps data management, food security and adaptive technologies geared for aging or disabled populations.

Access to Purdue’s vast resources makes creative, responsive career choices possible, she points out. “The excellence in research is the foundation for these new and unique ideas and opportunities for our students.”

Another kind of access also encourages the crossing of disciplinary boundaries: support from people like Schwind. He says he is now “on sabbatical” from acoustics consulting career, seeking new ways to serve after having shown his entrepreneurial instincts as a Purdue student. Those same instincts led him to contribute his acoustical expertise to a variety of Silicon Valley ventures, mechanical noise control projects and architectural acoustics for media companies and major entertainment venues.

He will make presentations to students in acoustical engineering and related disciplines while visiting campus on Friday.

Purdue was the first university to establish a school of engineering education, and its “incubator” spirit of bold collaboration made it appropriate to integrate the proud IDE legacy into the mission. But the school embraces many other forward-looking endeavors. It is the home of the First-Year Engineering Program, offering a common curriculum every fall to some 2,400 aspiring engineers before they move on to pursue their majors. A Ph.D. program supports cutting-edge research on how to educate engineers in the future, covering “everything from pre-kindergarten to lifelong learning,” says Pilotte.

Schwind was honored in 2011 as a “Purdue University Old Master,” and he has been happy to talk to students about his keys to success. He urges young visionaries to keep an open mind toward all kinds of applications of their talents and interests, seeing every job and collaboration as an opportunity for learning and imagining next steps.

Rick Thomas, a composer, sound designer and Fellow of the United States Institute for Theater Technology, praises Schwind’s long-term contributions to the arts and has emulated his instincts for connectivity and mentoring. Interdisciplinary engineering students have benefited since 1980 from Thomas’ courses in audio techniques and performance acoustics taught in Purdue’s College of Liberal Arts. 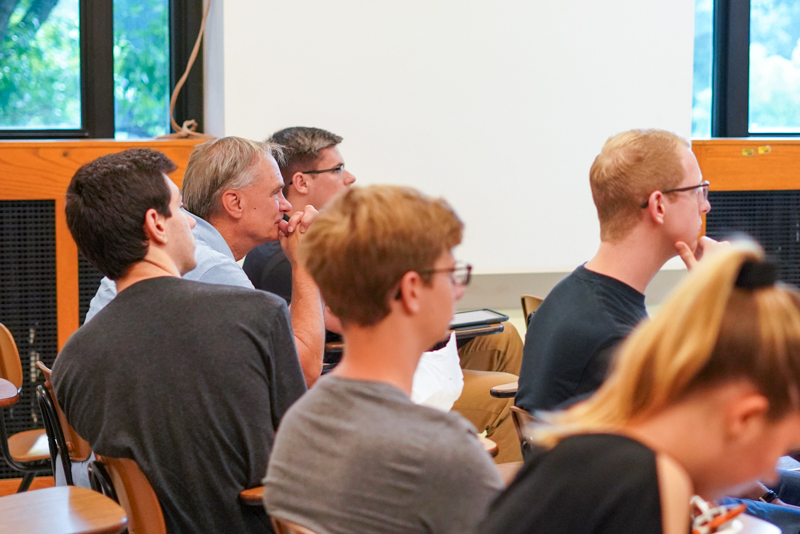 This exemplar of collaborations across the campus says he enjoys his associations with the School of Engineering Education, partly because he sees creative Purdue students building upon their professional knowledge and their passion to solve problems, to get things exactly right. Their persistence and tweaking often reveal a dynamic imagination, as does their pursuit of emerging, impactful career possibilities, he says: Schwind’s wide-ranging experiences can inspire these entrepreneurs who seek out uncharted territory for their talents.

“The idea that there was a science involved in acoustics had only dawned on a few people” in the 1970s, says Thomas. Early applications of engineering to phenomena of sound were relatively mundane, tied to sound-deadening or audio-visual services. Schwind’s commitment and excitement about the field started to pay off, with new influences and higher remuneration, when a growing entertainment industry embraced advanced technology. “Everybody’s attitude changed with Imagineering [at Disney], theme parks and the big shows in Las Vegas and on Broadway,” Thomas recalls.

Schwind verifies that his career started somewhat slowly, but he ties that to advice he wants to pass along to outside-the-box students: If you’re veering off the safe and narrow job path, be open to all sorts of employers, tasks and collaborations from which you can learn and derive bigger-picture plans.

“I took a number of projects, such as reducing disruptive noise in buildings,” he says. “Fifty percent of what I was doing was ventilation system quieting—every building needed that.” Schwind’s top priority was to “get out and do something” and “a little bit of everything.” When you have a panoramic view of the field, “the learning never ends.” His bottom line: “Stick with the mission. If you have a calling, stay with it if you can.”

Schwind acknowledges, “There is a certain kind of stigma that can come with engineering. People don’t think it can be creative enough. But this program just dodges that completely. You don’t have to be in a traditional discipline.” During a recent interview, he brainstormed about a possible new sub-discipline. “What about financial engineering?  What would it be like? Imagine—financial!”

Thomas exhibits the same enjoyment of endless possibilities. Asked about trends in acoustics, he says, “The big push in the arts is immersiveness. It’s a never-ending push toward the ability to create dream-like worlds, so audiences can fully buy into an experience,” such as live music in surround-sound of ever greater quality. The trick is to find a balance between the digital world’s dual ability to immerse people and isolate them. That might even be the next mission Schwind would like to adopt, Thomas muses.

It might be a mission an IDES or MDE student will want to tackle as ENE begins its next 15 years of bringing the established and the imagined together in powerful, interpersonal ways. The School of Engineering Education was established in 2004.

Pilotte says everything about the school resists isolation, and it specializes in improving the real world, not a dream world. But the always advancing legacy of Purdue engineering, to be celebrated at the anniversary event this month, does have an elevating element of music, or rhythm—what she calls “the cadence of practice.”

This cadence, in a school where encouragement “is a team sport,” grants leeway in academic traditions and structures for those students who identify a certain call to confront new challenges as ground-breaking practitioners. The goal is to introduce all engineering students to a problem-solving mindset that can transcend a campus-centric model of semester hours, homework and testing. Instead, it engages them in authentic experiences where ideas and actions follow a real-life tempo of deadlines and performance schedules.

The school brings Pilotte into everyday conversations with students so impressive that “inspirational doesn’t even begin to cover it,” she says. The shared reaffirmation of progress on September 20 will extend to Schwind as a timeless source of motivation, making sure his still-strong voice for interdisciplinary innovation continues to resonate.

In cadence with Purdue’s 150thGiant Leaps Celebrations, as well as IDES/MDE’s 50thanniversary, the programs within the school are celebrating their own anniversaries. First-Year Engineering, formerly known as the Department of Freshman Engineering, is now in its 65thyear. With the launch of a new research field of engineering education, the graduate program and school formed in the same year are celebrating 15 years and 100 PhD alumni.