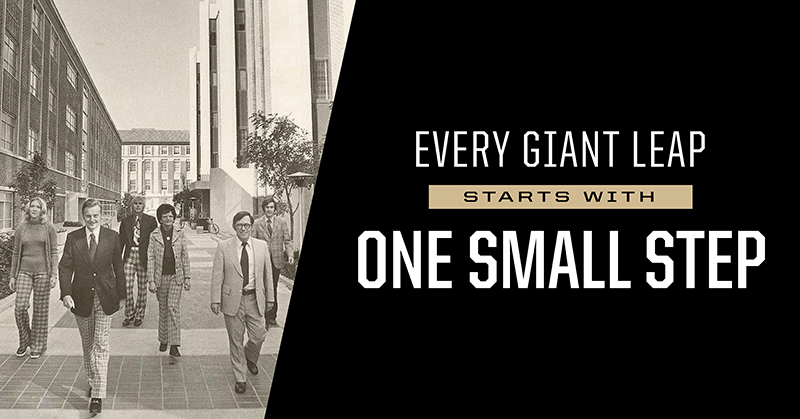 To celebrate, we first wanted to know about the twenty-one individuals who were the trailblazers for IDE.

Dr. Richard Grace, the founding head and creator of the program, calls them something greater.  “The word ‘pioneers’ comes to mind when I think about that first group of IDE students. These men and women were truly the pioneers every step of the way. There was a gamble for the students, entering a new world of engineering with no proven benefit over the traditional disciplines. But they entered the world of the unknown anyway and trusted us enough to be here celebrating 50 years later.”

A gamble indeed, but a chance worth taking. 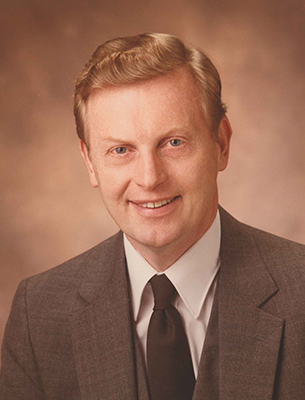 From the mid-sixties to mid-seventies, the entire country was in an anti-technology movement. The enrollment in engineering plummeted under a thousand students at Purdue, down half from normal enrollment.  IDE’s mission was to offer an alternative to the traditional engineering discipline. “The alternate option that IDE offered was a more humane approach to engineering, therefore new titles of engineering were born, like acoustical engineering, biomedical engineering, environmental engineering, and etc.,” said Dr. Grace.

The alternate pathways were soon underway with our first IDE alumni, who trailblazed new engineering disciplines for future generations. Kristi (Smith) Kokes was one of our first environmental engineer and only woman in the cohort. David Jordan also studied environmental engineering and practiced until his retirement in 2016. Howard (Ward) Cunningham, William Eaton and Dan Kakkuri were the first computer systems engineers from Purdue, as computer engineering wasn’t a discipline offered in engineering at the time. Notably, Ward went on to create the wiki and still works on open-source systems today. Geological, Inventive Design, Urban Studies, and Transportation Engineering were also engineering concentrations studied in the first cohort.

And our first two pre-med and pre-law degrees in engineering were also completed, establishing a new path at Purdue for future medical and law professionals to study engineering design and principals and then apply to their professional degrees. We still offer the pre-medical concentration with recent alumni, all pursuing post-graduate degrees and careers in medical-related fields.

How did students decide? Dr. Grace said the faculty onboard at the time saw the benefit and helped recruit students during their freshmen engineering introductory classes. And something clicked.

In the first 10 years, IDE graduated over 560 engineers in a wide range of concentrations. “The IDE undergraduate program did exactly what it was designed to do. Enrollment was back up to normal levels within 5-7 years. Some concentrations would eventually become its own program like biomedical engineering, for example.”  In fact, nearly a third of the graduates at that time studied the biomedical engineering concentration, now a vibrant and growing engineering discipline at Purdue’s Weldon School of Biomedical Engineering. Over a third of the original cohort stayed at Purdue to earn their master’s degree in engineering disciplines like civil and aeronautics, and computer science.

With the alumni’s persistent pursuit of discovering interdisciplinary fields in engineering and Dr. Grace’s ingenuity as founding head, there’s much more to our story. 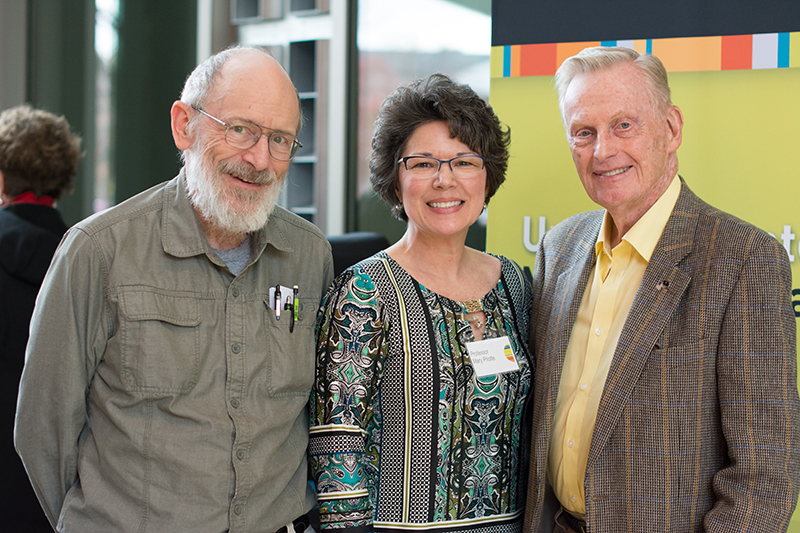 The program has evolved over the years and with only four program directors. It was the leadership’s persistence that created two shifts in the program and the evolving nature of new engineering disciplines.

The first shift was when then director Dr. Phil Wankat worked towards an ABET accreditation, necessary for engineering graduates who wish to pursue their professional licensure.  Before that time, graduates of IDE needed special documentation from the director for approval to take the fundamentals of engineering exam. In 2008, the accreditation was granted, and a new undergraduate degree was created named Multidisciplinary Engineering and the renaming of IDE to Interdisciplinary Engineering Studies (IDES). “We couldn’t have the same name of the program that was not ABET-accredited, therefore the new names were necessary,” said Dr. Wankat. This shift opened the doors to new concentrations and a clear path for those who want to pursue engineering careers (MDE) and for those who want to pursue professional degrees but desire an engineering background (IDES).

The second shift was in 2014 under the direction of current director Dr. Mary Pilotte, also co-director of the Fusion Studio for Entertainment and Engineering and a professor of practice in the School of Engineering Education (ENE). A dedicated space was created for our students in the Neil Armstrong Hall of Engineering. Tucked inside ENE’s suite that includes First-Year Engineering academic advising, faculty, and administration offices, sits a homeroom where MDE and IDES students gather. For the first time in the program’s history, students who take classes all over campus and likely would never meet otherwise, had a place to call home, study, meet with their peers and academic advisor Ms. Pekny. 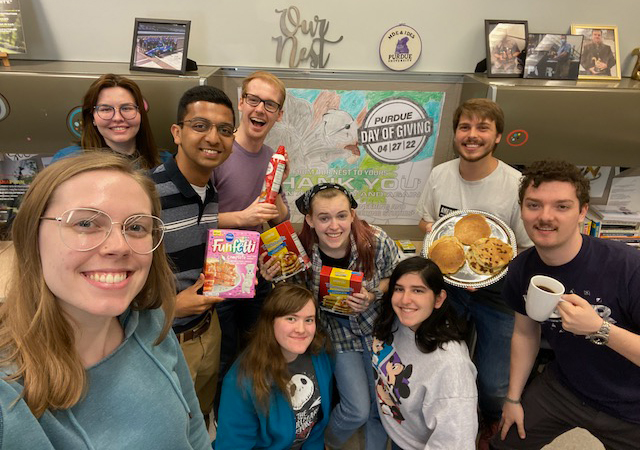 Circa 2022 Purdue Day of Giving: The Multidsciplinary Engineering Student Society hosted a pancake breakfast in the Nest during Dead Week for MDE and IDES students

Though it took a bit of time to become routine, now the space is actively utilized, and the students have formed a tight-knit, welcoming community. “Creating a sense of place in the larger context of Purdue was critical to helping students gradually develop a sense of community and grounding.  It also offers a home where it is perfectly ok to envision one’s self and the future of engineering differently, and to formulate an identity around what it means (or could mean) to be a multidisciplinary engineer, in their own way,” said Dr. Pilotte, known affectionately as Prof. P. to students who have traveled through MDE/IDES during their time at Purdue.

New concentrations have been added too, like Humanitarian Engineering, Lighting Engineering, Nano Engineering, and most recently Theatre Engineering, the first and only ABET-accredited program to change the future of entertainment and engineering education. Inventive Design, mentioned in the first cohort, was redesigned as Visual Design, a now popular concentration for artistic engineers looking to innovate consumer products, from mobile phones to kitchen appliances to the automobile industry. “The speed of emergent technologies and novel applications for engineering sciences has exploded, and there is no shortage of possible trajectories or new concentrations that will be born in multidisciplinary engineering.  We don’t build highways to nowhere in MDE – we pave the way forward to the future of engineering,” said Dr. Pilotte.­

There is evidence of another coming shift, explaining the program’s seam-busting numbers at Purdue and peer institutions adding their own multidisciplinary programs to their engineering degree options. New ideas and emerging interests of students tackling grand challenges need a place to grow new disciplines, and as history shows from 50 years ago, trailblazers come to Purdue on a persistent pursuit and have the tools and resources to see it through. They will find a home in the School of Engineering Education’s Multidisciplinary Engineering and Interdisciplinary Engineering Studies Undergraduate Degree Programs.