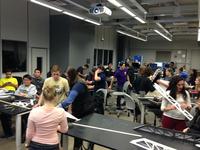 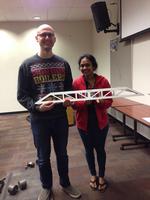 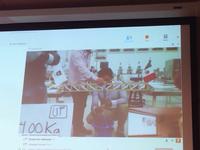 Purdue CE students Aishwarya Puranam, Lucas Laughery, and William Pollalis represented Purdue in the 9th International Bridge Contest. They competed against 11 teams from around the globe, and Purdue placed first in the competition for the fifth time in six years.

On 11 December, 2015, Purdue CE students Aishwarya Puranam, Lucas Laughery, and William Pollalis represented Purdue in the 9th International Bridge Contest. They competed against 11 teams from universities in the U.S. (U. of Minnesota, UCSD, Rose-Hulman), Japan (NIT, U. of Nagoya, Yokohama U., KSU, Tohoku U.), Mexico (U. Panamericana), Colombia (National University), and Turkey (IYTE). Aishwarya, Lucas, and Will obtained the first place in the competition. This is the fifth time in the last six years Purdue has placed first in the competition.

An internal competition was held on Dec. 3 to select the bridge and students representing Purdue. The competition took place in the i2i laboratory (photo) and involved dozens of graduate and undergraduate students.

The competition started in 2007. It was conceived by Prof. Toshikatsu Ichinose from Nagoya Institute of Technology (NIT) as a means to:

This year the contest involved the construction and testing of a bridge to span 1 m. The bridge was to be made with paper and glue. Its weight could not exceed 100 grams and its height could not exceed 10 cm. Bridges were loaded at midspan. The bridge resisting the most load was declared the winner. The competition was done simultaneously in Colombia, Japan, Mexico, Turkey, and the U.S. using an online teleconference system. Rules change year after year.