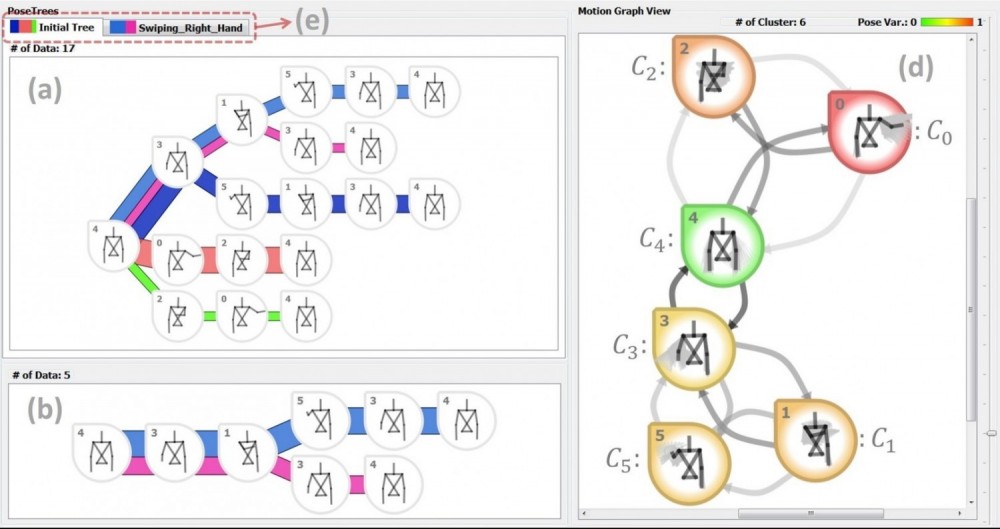 Pattern analysis of human motions, which is useful in many research areas, requires understanding and comparison of different styles of motion patterns. However, working with human motion tracking data to support such analysis poses great challenges. In this paper, we propose MotionFlow, a visual analytics system that provides an effective overview of various motion patterns based on an interactive flow visualization. This visualization formulates a motion sequence as transitions between static poses, and aggregates these sequences into a tree diagram to construct a set of motion patterns. The system also allows the users to directly reflect the context of data and their perception of pose similarities in generating representative pose states. We provide local and global controls over the partition-based clustering process. To support the users in organizing unstructured motion data into pattern groups, we designed a set of interactions that enables searching for similar motion sequences from the data, detailed exploration of data subsets, and creating and modifying the group of motion patterns. To evaluate the usability of MotionFlow, we conducted a user study with six researchers with expertise in gesture-based interaction design. They used MotionFlow to explore and organize unstructured motion tracking data. Results show that the researchers were able to easily learn how to use MotionFlow, and the system effectively supported their pattern analysis activities, including leveraging their perception and domain knowledge.

Sujin Jang is currently working at Motorola, Chicago, IL. He received his Ph.D. from the School of Mechanical Engineering at Purdue University in August 2017. His research work at the C-Design Lab broadly involved human-computer interaction, visual analytics, machine learning, and robotics. His research has focused on creating methodologies and principles for effective use of gestures in HCI. In particular, he has developed methods to analyze and exploit human gesture based on visual analytics integrating machine learning and information visualization; biomechanical arm fatigue analysis; a gestural user interface for human-robot interaction; and an interactive clustering and collaborative filtering approach for hand pose estimation. He also has served as a teaching assistant for ME 444: Computer-aided design and rapid prototyping, and received the Estus H. and Vashti L. Magoon Award for Teaching Excellence in 2015. [Personal Website][LinkedIn]