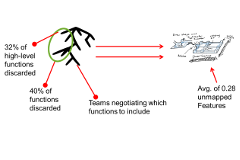 This paper explores functional decomposition in early design. In the first part of this study, we explore how the three most common methods (top-down, energy-flow, enumeration) affect concept generation for novice design teams (n=25). We found that nearly all the features in the final concept could be mapped to the function diagram, though not all the functions mapped to the actual concept. This suggests that there is not much change in system functionality between these two phases, despite being separated by a few weeks. We also found that teams who used top-down and energy-flow performed nearly the same, and teams who used enumeration performed worse than those who used energy-flow. Based on these results, we recommend using either top-down or energy-flow, but not enumeration in early design. We also observed that teams used the diagramming process to reach a consensus and support team communication. The second part of this study evaluates design reports (n=78) from industry engineers taking a distance learning design course. Even though roughly half of the reports used functional decomposition, there was no correlation between using functional decomposition and final design quality as measured by various grade components. We also observed that half of the function diagrams were tree diagrams. This supports prior findings that a top-down, tree-based approach is more intuitive for engineers. Together, these results suggest that functional decomposition is helpful for team communication, but show no direct correlation with design outcome. We also recommend training strategies for teaching decomposition based on differences between the two datasets.

Joran is a research scientist and lecturer at Yale University and a Co-Advisor with Professor Tahira Reid. He received the degree of D-PhD in the School of Mechanical Engineering at Purdue University. He received his bachelor's in mechanical engineering from the Brigham Young University. His research focuses on how students abstract and solve complex problems in early design phases, with a special emphasis on functional decomposition and sketching/visualization. Other research interests include prototyping, engineering history, education, family science, and history. Joran spends his free time volunteering, playing board games, hiking, playing music, or spending time outdoors. His past projects include starting the Purdue Maker's club, various sketching workshops, and simple robots. He recently finished an internship at IMMI, a top automotive safety products company.  Joran is a member of ASME and the Order of the Engineer. You can find more information at http://joranbooth.wordpress.com/.
More Publications by Joran