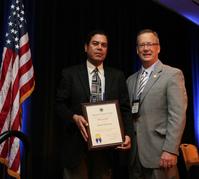 In making the announcement, ANS President Eric Loewen said, “As scientific society members, we are proud to be associated with these individuals who have done so much to advance nuclear science and technology by sharing their contributions so enthusiastically with their colleagues.” Hassanein earned the highest grade of ANS membership for /“his significant development of comprehensive models and computer simulation packages for plasma material interactions for fusion energy applications in both magnetic and inertial confinement as well as other plasma science applications/."

Concluded Loewen, "Nuclear science and technology continues to expand and provide benefits to humanity as our knowledge grows within this new field of study.  ANS Fellows are at the boundary of this knowledge expansion and are thought leaders who have significantly helped to advance nuclear science."

This ANS Fellow is Prof. Hassanein's fourth Fellowship in less than 2 years.  Hassanein is also a Fellow of SPIE, International Society for Optics and Photonics, a Fellow of AAAS, the American Association for the Advancement of Science, and a fellow of IEEE, the Institute of Electrical and Electronics Engineers.