Dimitrios Michalaros, a First-Year Engineering student, has had one lingering project incomplete from his high school days in Greece. That is, until today. He and three classmates entered a competition their senior year to design an artificial gravity Nanolab. 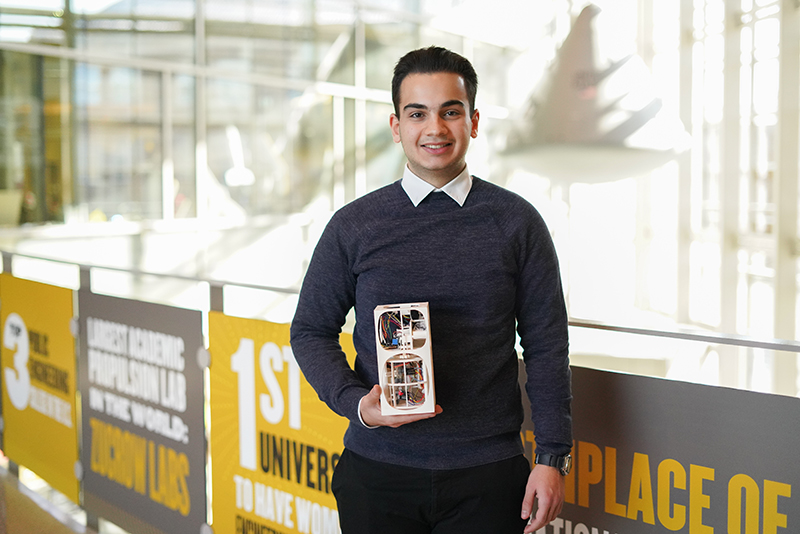 Their design was chosen by the Hellenic Association of Physicists as the second best of the Hellenic Aerospace Student Contest and was awarded one of the top five designs overall. The top designs, including Dimitrios and his teammates, flew today aboard Blue Origin’s New Shepard as payload to collect data for the students.

Weeks before Dimitrios sent their final design from Purdue to Nanoracks, which integrates payloads for Blue Origin, he worked on his team’s behalf to make final design and code tweaks for essential improvements. He contacted Dr. Steven Collicott, Professor of the School of Aeronautics and Astronautics, as suggested by his contact at Nanoracks. Dr. Collicott enthusiastically helped by giving Dimitrios advice and pointing him to resources for a battery-draining circuit design issue. However, Dimitrios and his team completed the work largely on their own. “I have been active in the use of commercial re-usable sub-orbital rockets for research and education missions for a decade now and so it is exciting that the sub-orbital market in the `New Space’ world has matured to the point that we have an incoming engineering student with spaceflight experimentation experience,” said Collicott. Further, Collicott said it is a great day for aerospace engineering education at Purdue through noteworthy examples like this. “The achievements of Dimitrios and his teammates inspire us to pursue greater accomplishments in aerospace engineering. That we now have incoming students with spaceflight experiment experience also means that we must continue to update and improve our educational activities here to maintain leadership in the field,” stated Collicott.

The Nanolab is an experimental setup that is automated, controlled by an Arduino, and is designed to operate in microgravity conditions aboard Blue Origin’s New Shepard. Today’s launch scheduled for 11:30 AM CST has been a long time coming for these now college students and most recently Dr. Collicott. “Like Dimitrios, I am now becoming very eager for a successful launch, followed weeks later by the return of his data from his experiment.  We are delighted that a high-achieving and highly capable student like Dimitrios chose Purdue AAE as the best place to build his aerospace career.  I look forward to this young expert taking my AAE418 “Zero-gravity Flight Experiment” design-build-test class here at Purdue in the next few years,” said Collicott

Dimitrios is completing his first semester in the EPICS program through First-Year Engineering in the School of Engineering Education.  He brings with him prior knowledge of Arduino, the programming language used for their experiment. “With the programming needs for the Arduino to do what it needs to do for the experiment, I had significant help from my EPICS engineering course that utilizes Python. The coursework and feedback from my peer teachers helped me understand how my code should be structured. I was also able to learn how to correct logic in the code. The practice of Python in ENGR 133 definitely helped me write my Arduino code in a more efficient way.” stated Dimitrios.

When the data is returned to the students at the start of the new year, Dimitrios and his teammates look forward to sharing the results with their mentors and to continue their work on zero gravity.

More about the Project

Project title: “Artificial Gravity Nanolab: effect of centripetal acceleration gradient on the flow of saline in a closed circulation loop.”

The Nanolab is an experimental setup that is automated, controlled by an Arduino, and is designed to operate in microgravity conditions, aboard Blue Origin’s New Shepard.

The experimental layout consists of a hollow cylinder which is rotated by a DC electric brushed motor. The electric motor rotates the cylinder at a constant angular velocity of 45 RPM. Within the hollow cylinder, a closed, airtight, mock circulatory loop has been installed, which consists of silicone tubes and a peristaltic pump. This flow loop is an attempt to simulate the large circulation of a human's circulatory system. The liquid flowing in the tubes is saline (0.9% w / v NaCl aq solution). There are two points of pressure measurement, one stationary and one that is attached to a rail that moves along the radius of the cylinder with the help of a servo mechanism. The second, non-stationary point of pressure measurement changes its distance from the axis (radius of rotation) and thus the centripetal acceleration of the point changes every time it is moved by the servo mechanism. That way we can have several different measurements for the liquid's static pressure at the non-stationary point and determine the flow characteristics, in order to see how much the flow is affected by the centripetal acceleration gradient. The goal is to find the smallest possible radius for which the flow has as similar characteristics as possible to when the loop runs on the surface of the earth (when on earth the cylinder does not rotate).

Ultimately, the goal is to find the smallest possible radius which would allow a standing astronaut to work and live inside a rotating spacecraft, without having his blood flow affected by the centripetal acceleration gradient and possibly suffer from black-outs , because of the centripetal acceleration difference between his head and his feet. Having an very large rotation radius to neglect this effect would require a very large spacecraft, which would be difficult and very expensive to assemble.

This project directly relates to design parameters of future spacecraft, which is related to the career I would like to follow in Astronautical Engineering.

Teammates include Dimitrios Michalaros, Panagiotis Anastasas and Themistoklis Arvanitis from the 1st General Lyceum of Rhodes Venetokleio and Ioannis Ioannidis from the 3rd General Lyceum of Rhodes. Their coordinator from the Hellenic Association of Physicists who helped them with the development of the nanolab is Dr. Takis Papadopoulos. Their supporting teacher at 1st General is Mr. Ioannis Filopoulos, an IT teacher who helped with the design and electronics.

After the launch and the data is returned, the experimental data will be processed with the help of a piece of code written in Python, utilizing the knowledge obtained from the EPICS engineering courses.